28.04.1947 at 4.00 am 6 Polish division (near 17 000 soldiers) and groups of Polish Internal Security Corps surrounded the area where the Ukrainian population lived. In addition, 13 602 soldiers of the Czechoslovak army blocked the border, and 17 reconnaissance aircraft controlled in the border of the forest and mountains. Soldiers surrounded the village and ordered the residents to prepare the way. Meanwhile the soldiers searched the houses, commercial premises and yards, and sometimes set fire to the house and yard.

To pack belongings, were given 2 hours (sometimes 15-20 minutes), allowed to pick up personal belongings, food, livestock, stocks of grain and potatoes. Because of the haste and lack of transport, the settlers were able to “grab” only what you need. Often set limits on Luggage weight up to 25 kg per person. After loading the column property of people under armed control went to the Assembly point. Such marches could last more than 20 hours. At one point the people gathered from several places and expect transport in the boot of the train station.

The stated goal of the operation was to suppress the Ukrainian Insurgent Army (UPA), which had been fighting the communist Polish People’s Army in the south-eastern territory of the Polish People’s Republic. The deportees were accompanied by the numerous army forces to the train stations, where they were herded behind barbed wire. Functionaries of the Ministry of Defense, along with army personnel, sought out and arrested many people under suspicion of being collaborators of OUN or UPA organizations. Alleged collaborators were arrested, subjected to brutal interrogations and beaten. Some were released while the rest ended up in the Jaworzno concentration camp (established by the Nazis in 1943 amidst the WW2 and then used by the Soviets and by the post-war communist Polish government until 1956). The first transport left on April 29, 1947 from Komancha and Kuliashne Sianik region train stations. 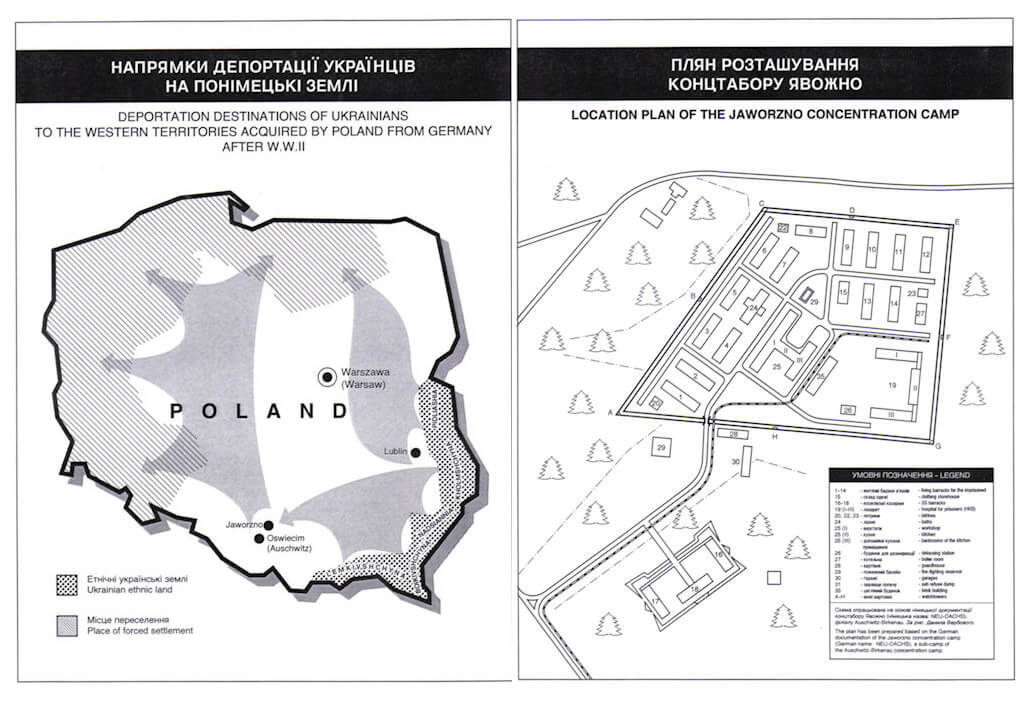 The operating group responsible for the implementation of “Vistula Operation” included the 3-rd, 6-th, 8-th and 9-th divisions of infantry. In all there were 15 regiments. Also assigned were: the division of the interior defense corps, consisting of 3 brigades; a regiment of combat engineers composed of 310 transport trucks; the 12-th regiment of the infantry and a division of militia composed of 700 men as reserves of the commander of the operation group; the aviation squadron Dovhlias and 9 PO-2, 4 armored trains and other specialized subdivisions. All together in excess of 20,000 well-trained militia, railway patrol, national defense patrol, and border patrol forces took part. The first phase of “Vistula Operation” lasted from April 27, 1947 to the end of May, 1947. At this time approximately 50,000 Ukrainian civilians were exiled to western Polish territories. Some 482,000 Lemkos, Rusyns and Ukrainians were deported to the Ukrainian SSR between September 1944 and April 1946, although some 300,000 remained in their native settlements within the borders of Poland.

The operation was named after the Vistula River, Wisla in Polish. Some Polish and Ukrainian politicians as well as historians condemned the operation following the 1989 fall of communism in Eastern Europe, and described it as ethnic cleansing.

See also: Ukrainian Foreign Ministry calls provocation move to take down monument to UPA fighters in Poland on the eve of the marking of the 70th anniversary of the Operation Vistula