The dismantling of the monument to Lenin in Kharkiv

On the 28th of September 2014 the Head of Kharkiv Regional State Administration Igor Baluta signed the official order about the dismantling of the monument to Lenin in Svoboda Sq. (Freedom Square) in Kharkiv and extract it from the State Register of Immovable Monuments of Ukraine.
The Interior minister’s advisor Anton Heraschenko reported about the preparations for the urgent implementation of the order on his official Facebook page.

“For security reasons, Svobody Sq is surrounded by a special police with automatic weapons and ready to apply it in cases provided by law. Anyone who tries to go to Square with weapons to hold armed provocation risks to be turned into 200 th or 300 th “- added Heraschenko.

Interior Minister Arsen Avakov said: “Lenin? Let falls .. It’s only important that people are not injured. … To scoundrels and villains do not use the storm of emotions of Kharkiv people and not use it for the next collision.”

“Gave the police to ensure of the safety of people ONLY, not the idol. After the order of Governor Baluta about the dismantling the monument does not interest. Important is the process to be passed without further incident,” – said Avakov.

He also said that “gave the command, in conjunction with the release order of the Governor of the dismantling of the monument – to stop the criminal case of damage to the monument.” 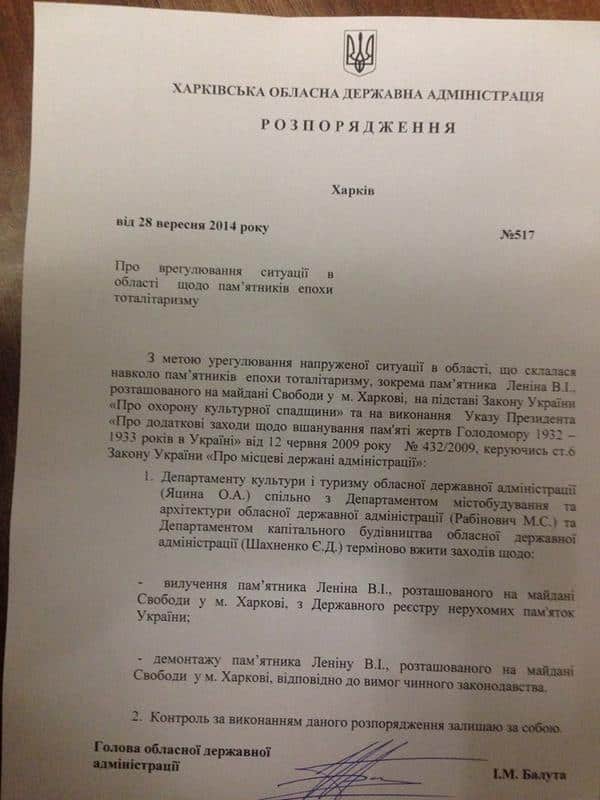 Heraschenko in his Facebook said: “Lenin has just fallen. During dismantling, no one was hurt.”

The crowd was filled with a sense of justice, euphoria and inclusive holiday. Happy people did mass “selfie” in the split head of the deposed idol of totalitarian regime.