The most difficult situation in the zone of conflict in Donbass remains in the Debaltseve stronghold, – Military update 1.31 from Dmitry Tymchuk 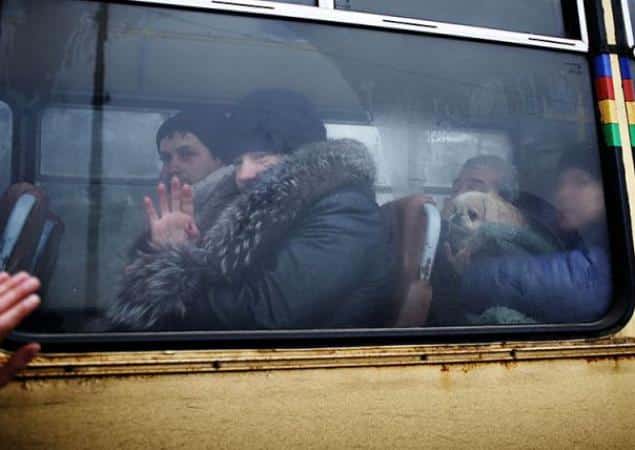 The most difficult situation in the zone of conflict in Donbass remains in the Debaltseve stronghold. Russian-terrorist troops continue to transfer reinforcements to the area of Yenakiieve – Vuhlehirsk for their tactical group, currently engaged in heavy combat in Vuhlehirsk and south of it. The passage of supply convoys through Yenakiieve into this area was observed (up to 15 covered cargo trucks, accompanied by an armored group from three BMP-2 infantry fighting vehicles [IFVs]. Also, the transfer of another battery of enemy armored vehicles (8 tanks and 14 units of IFVs and armored personnel carriers [APCs]) into the area was observed through Krasnyi Luch.

An artillery group (25 units of cannon artillery and 8 units of MLRS) provides support for the terrorist tactical group operating in Vuhlehirsk. In addition, insurgent artillery units that operate from the suburbs of Makiivka and Yenakiieve provide their support [to the combat team in Vuhlehirsk].

On the left flank, an increase in activity of terrorist forces has also been witnessed near Chornukhyne and Novohryhorivka. A tactical group of Russian-terrorist troops that includes the reinforced units that took part in fighting near Troitske and Sanzharivka (up to 350 people, 12 tanks and about 25 AFVs – mainly BMP-2 and BTR-80) operates in this area. This task force operates on a relatively narrow stretch along the Alchevsk-Debaltseve highway in an attempt to inflict a concentrated blow to the positions of Ukrainian troops. The actions of the tactical force are supported by artillery from positions southwest of the settlement of Bryanka, who are also attempting to conduct fire control of the M03 – E40 highway.

A build-up of Russian-terrorist troops is [currently] observed on another stretch of the stronghold – in the vicinity of Faschivka and Nikishyne. An enemy formation that is mainly staffed with so-called “Cossacks” (up to 600 people, several mortar batteries and up to 15 AFVs) operates in this area. The formation is spread out on both sides of the highway in the direction of Krasnyi Luch; its small units of 15-20 people “represent” a frontal assault on the bridgehead.

Insurgents from the so-called “Cossack” formations, who previously suffered serious losses on the Debaltseve bridgehead, expressed their extreme dissatisfaction with the Russian command. In particular, the terrorists accuse the Russian officers in charge, of the “operation” of driving insurgent units to storm the positions of Ukrainian troops, without the adequate support of artillery and armored vehicles, “to the slaughter.” As a result, many terrorist units were destroyed (for example, of the 80 insurgents who were part of the “Cossacks” unit from Antratsyt which participated in the assault, 21 returned to their original positions).