As per the field data ahead of the parliamentary elections terrorists prepare a number of provocations in Donbas. In particular they plan to shell residential blocks and civilian objects in order to discredit Ukrainian military units.

Outside of population center Sukhodolsk of Krasnodonsky district Luhansk region military machinery of the militants consisting of 1 APC and 1 BM-21 Grad MRLS based on Kraz vehicle is located, they got two white stripes painted on them which is the insignia of Ukrainian Armed Forces. Moreover production of chevrons with Ukrainian insignia was set at one of Luhansk enterprises.

National Security and Defense Council (NSDC) calls on residents at population centers on the territory currently seized by militants to be extremely careful.

The Russian side impedes the amplification of the OSCE mission in the anti-terrorist operation (ATO) zone. In particular Russia blocked the provision on implementation of Minsk accords as to the control over the entire Ukrainian-Russian border by OSCE monitors. Due to the veto of the Russian Federation on 22 October OSCE Permanent Council was able to only prolong the term of work of the actual observation mission which includes 16 monitors at only two border crossing points. These border crossing points together constitute only 1km out of a total of over 100km of border between Ukraine and Russia currently controlled by terrorists. Ukraine’s position as to the extension of the OSCE mission is supported by the international community. In particular US Ambassador to OSCE Daniel Baer stated that the observation mission as it is today is in fact “inadequate”. 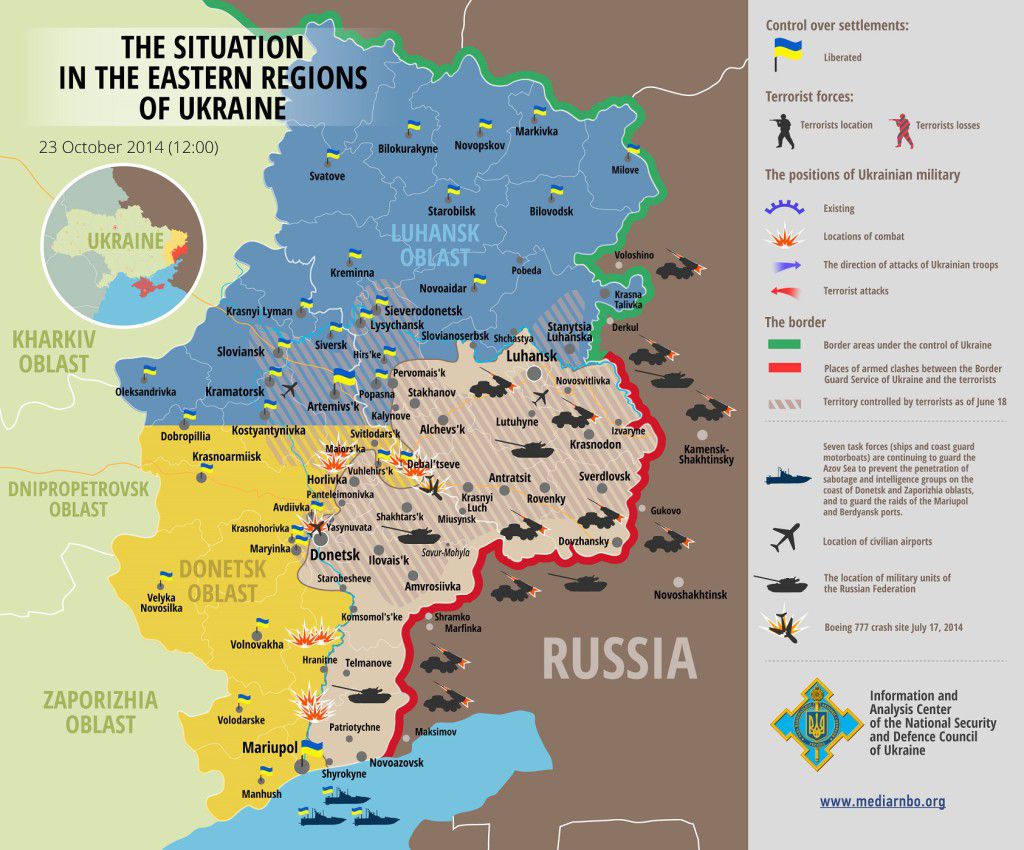 Over the past 24 hours in the ATO zone decrease of terrorists’ activities in Luhansk region was observed. Instead in the South of Donetsk region where re-dislocation of Russian-terrorists’ units and machinery was observed militants intensified their activities.

In the last 24 hours 1 serviceman was killed, 2 injured.

Grad MRLS were used on Ukrainian forces four times near Starohnativka of Telmanivsky district and near Mykolayivka village of Volnovakha district. ATO positions near Pavlopil and Talakivka got shelled with mortars. Ukrainian military repelled attack on ATO stronghold near Novolaspa of Telmanovsky district.

Ukrainian reconnaissance personnel who are constantly searching for subversive-reconnaissance terrorist groups discovered militants group near Pishevyk village in Novoazovsk district. As per the recon data terrorists were getting ready to cross Kalmius river and stage a row of provocations on Donetsk-Mariupol highway. Our reconnaissance team engaged in combat, enemy’s subversives suffered losses and had to retreat to the Eastern direction. Unfortunately 1 our serviceman was killed in the combat.

Near Donetsk bandits made another attempt to storm the airport. The attack was launched at the air-control tower that secures visual and firing control over the territory. Due to coordinated actions of troopers and artillerists the attack was repelled, terrorists suffered big losses.

Artillery and mortars were used a number of times near Debaltseve and outside of Nikishyne population center in Shakhtarsk district.

In the last 24 hours there were no engagements at the border outside of ATO zone. However yesterday MI-8 helicopter of the Russian Federation Armed Forces was spotted flying along the state border line without violation of Ukraine’s air space opposite the parts under responsibility of the border guard detachments “Markivka”, “Milove” and “Bilolutsk” of Luhansk region. Flight of an UAV directed to Kominternove population center was spotted at “Sartana” border part

Work on liberation of hostages captured by terrorists continues. Total of 2800 claims were submitted to the inter-agency center dealing with the problem of hostages. Due to the ceasefire regime over 1300 persons were liberated, 830 hostages kept by the terrorists were liberated within the last month. They are both our military and civilians.

Response of the international community to the events in Ukraine.

Head of the European Commission informed that the total sum of assistance Ukraine will receive by the end of the year constitutes EUR 760 million.

Apart from that President of Ukraine Petro Poroshenko during his phone consultations with the Federal Chancellor of Germany Angela Merkel discussed the situation in Donbas, in particular the state of implementation of Minsk accords ahead of the European Council session to take place on 23-24 October in Brussels.

Spokesman of Ukraine’s permanent mission to the UN Yegor Pyvovarov said that the Ukrainian side is ready to testify at UN Security Council that prohibited cluster munitions in ATO zone were used by the armed terrorists backed by the Russian Federation. He noted that the Russian delegation will most likely purposefully raise the issue during its intervention at the UN Security Council. “Ukrainian side is prepared for that,” he underlined.

US Secretary of State John Kerry called to end Russia’s aggression against Ukraine. “We hope that Russia will understand how seriously the world takes the efforts to cross the lines of sovereignty and independence of a nation.”