Working breakfast with the participation of the President of Ukraine Petro Poroshenko and the President of Russia Vladimir Putin ended in Milan. It took place within the framework of the 10th Summit of “Asia-Europe” Meeting (ASEM) and lasted almost an hour and a half.

The Prime-minister of Italy Matteo Renzi,  the Prime Minister of Great Britain David Cameron, the Chancellor of Germany Angela Merkel, the President of France Francois Hollande,  as well as head officials of the European Council Jose Manuel Barroso and Herman Van Rompuy also took part in the negotiations.

The Prime-minister of Italy Matteo Renzi stated that an important step on Ukrainian discussions had been made as a result of leaders’ extended session within the ASEM meeting.  “We met today in order to discuss situation in Ukraine. The first step in this discussion has been made, though numerous discrepancies remain.  It is understandable, but there is a desire to find a solution which gives hope for search of the settlement”, – he stated.

Importance of thorough and timely implementation of Minsk agreements of 5th and 19th of September, necessity to extend OSCE mission for the situation in Ukrainian-Russian border monitoring as well as the need to improve its technical supply were discussed during the meeting.

The parties mentioned the importance of establishing the control over Ukrainian-Russian segment of the border, absolute ceasefire and all the hostages release.

After the end of the meetings the Head of the Ukrainian state pointed out that “unanimity and solidarity with Ukraine were demonstrated”. 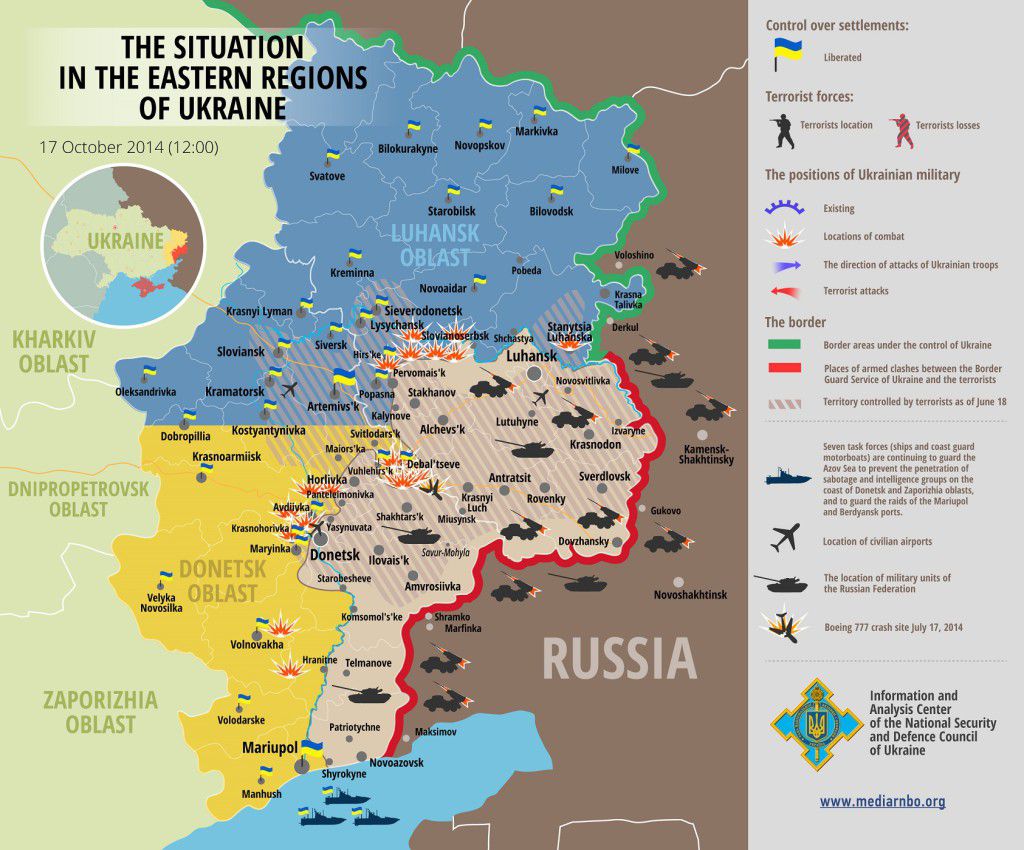 Yesterday at 5:20 pm a reconnaissance team of the Armed Forces of Ukraine consisting of 8 people found a terrorist group consisting of up to 20 people near a ruined bridge in the vicinity of Verkhnyotoretske settlement in Yasynuvata district.

The reconnoiters engaged with the prevailing forces of the enemy. Skillfully using the ground relief and the element of surprise, our soldiers managed to destroy 4 militants at once and wound several of them, following which the retreat started.

One of our servicemen was wounded during the battle. The reconnoiters followed by the enemies succeeded in bringing them under fire of the main covering party. As a result the gang was almost fully destroyed. Unfortunately, an enemy sniper’s bullet ended life of a reconnoiter who was helping to take a wounded comrade out. The wounded soldier was administered first aid. He has already been evacuated to a medical facility.

In total, 3 Ukrainian servicemen died within 24 hours as a result of terrorists’ bombardments and combat clashes and 10 were wounded.

The situation stabilized and the enemy defeated in a checkpoint nearby Smile settlement in Luhansk region, where intense battles had been taking place for several days.  Our positions were strengthened and the defenders received reinforcement. The checkpoint was outshot  eight times for the last 24 hours.

Terrorists outshot our troops’ positions in Donetsk airport three times using artillery, mortar guns and tanks.  This object is under our troops’ control. According to intelligence data received, over 70% of participants of the terrorist subdivision consisting of former police officers aiming at assailing Donetsk airport, deserted the colours.

The bombardments were recorded nearby

In general, militants’ activity northwards and in Donetsk direction slightly reduced as compared to the day before. At the same time, militants’ activity increased in south. Terrorist are redeploying their forces nearby Shyrokino populated locality. These forces are supplied directly from Russia.

Use of Russian pilotless aircrafts for air reconnaissance was recorded in this area nearby Sartany and Velyki Novosilky populated localities.

There were no military clashes on the border segments controlled by Ukrainian troops.

Transportation of terrorists and Russian troops’ damaged equipment to the Russian Federation with the purpose of selling it for scrap became more intense recently.  According to intelligence data received,these are dozens of units taken out on truck platforms.At the same time, terrorists organized the process of disassembling the equipment and weapons which had been knocked down by Ukrainian troops and are beyond economic repair. This scrap metal is also taken out to be sold in Russia. Clashes between Russian troops and various terrorist gangs for equipment and scrap metal export are aggravating.

Situation in populated localities of the ATO zone

16 out of 131 Russian citizens whose relatives contacted the Security Service of Ukraine hotline searching for their son, brother or husband, returned to Russia.All the returned Russians are military servicemen of the Armed Forces of the Russia Federation.As we informed previously, ten days ago the Security Service of Ukraine opened a hotline for Russian citizens aimed at helping them to find Russians missing in military actions in Donbas as well as identify bodies of the Russian servicemen who had died.

Terrorists continue outshooting residential quarters of towns in the territories temporarily controlled by them. For instance, yesterday they delivered artillery fire upon central part of Hranitne village in Telmanivskyi district of Donetsk region from the direction of Nova Maryinka village.

Number of civilians going out from Donetsk and the neighboring towns increases. In order to prevent it terrorist gave command to make special marks in not only members of illegal armed groupings’ passports, but also in passports of civil inhabitants of Donetsk. In this way terrorists are trying to intimidate departing civilians threatening that Ukrainian Special Forces were going to identify them as militants.

2 citizens were detained in one of the National Guard of Ukraine checkpoints nearby Debaltseve town.  2 Kalashnikov guns with three magazines were seized from them. One of the detained turned out to be a citizen of the Russian Federation, born in Omsk town. The detained Russian carried an ID of a mobile air defence missile system operator issued by People’s militia of Donbas. The other one turned out to be a citizen of Ukraine from Makiyivka town. The detained were passed to the officers of the Security Service of Ukraine.

Within last 24 hours Pyrotechnical subdivisions of the State Service of Ukraine for Emergency Situations found and rendered safe 320 units of ammunition and explosives, including: 121 artillery shells, 31 mortar bombs, 14 ball grenades and mines, 4 unit of rocket-powered ammunition, 150 pieces of other explosives. Since the beginning of works on 06 July 2014, 24115 units of ammunition were rendered safe. 957 administrative buildings and other premises were checked for presence of explosives. In total, area of 1404 ha and water surface of 37.5 ha were checked.

As we previously informed, B25 transmission line on the segment Donetsk – Mariupol was out of function since as a result of terrorists’ bombardment. As a result, there were no incoming or outcoming intercity or international communication for users in Kurakhove, Volnovakha and Velyka Novosilka populated localities in Donetsk regions.  The fault has been cleared by now.Incoming/outcoming intercity and international communication has been restored in all the populated localities.

The Ministry of Foreign Affairs of Ukraine made reprehensions related to  illegal adoption of children, the citizens of Ukraine, on the territory of Autonomous Republic of Crimea. At present a program “Train of Hope – Crimea” is being implemented in Autonomous Republic of Crimea under the guidance of Russian civil organizations, aimed at Russian citizens’ adoption of orphans and neglected children who are the citizens of Ukraine and reside on the territory of the autonomous republic.

Article 21 of UN Convention on the Rights of the Child envisages that arties that recognize and/or permit the system of adoption shall ensure that the adoption of a child is authorized only by competent authorities.

Article  283 of the Family Code of Ukraine envisages that the adoption of a child – a citizen of Ukraine by foreign citizens is to take place with the consent of the central executive authority implementing state policy in the sphere of adoption and children’s rights protection. Such authority in Ukraine is the Ministry of Social Policy.

The document states that the Ukrainian party files a strong and rigorous protest in connection with the described actions referring to the abovemetioned categories of children – citizens of Ukraine which take place in violation of international provisions of law and effective legislation of Ukraine, neglecting the envisaged procedures in this sphere. It also states that such adoption shall be illegal and, consequently, carry no legal weight.

The Ministry of Foreign Affairs of Ukraine called upon the Russian party to take all the necessary measures in compliance with international legal commitments in order to prevent illegal adoption of Ukrainian citizens by foreigners and their following illicit transfer from the territory of Ukraine.