On October 14 the President of Ukraine Petro Poroshenko held a telephone conversation with the President of the Russian Federation. During the conversation they sustained the demand for consistent implementation of agreements on ceasefire and withdrawal of troops. The partners in conversation agreed the agenda and format of the meeting during “Asia – Europe” summit which would take place on October 16-17 in Milan.

The President of Ukraine Petro Poroshenko met servicemen participating in anti-terrorist operation during his working trip to Zaporizhzhya region yesterday. The President decorated the soldiers who had demonstrated courage and heroism fighting for Ukrainian land with state awards. The President also introduced a newly approved by Verkhovna Rada Minister of Defence Stepan Poltorak to servicemen.

During his trip Petro Poroshenko visited “Motor-Sich” plant and was made aware of the situation at the enterprise which is to deliver 13 helicopters for Ukrainian army within the framework of government order.

Fulfilling the Peace Plan of the President of Ukraine another 14 Ukrainian hostages were set free from capture in Donbas within 24 hours.We would like to remind that the total of about 1500 Ukrainians who had been held hostage were liberated since the moment of signing ceasefire Minutes. 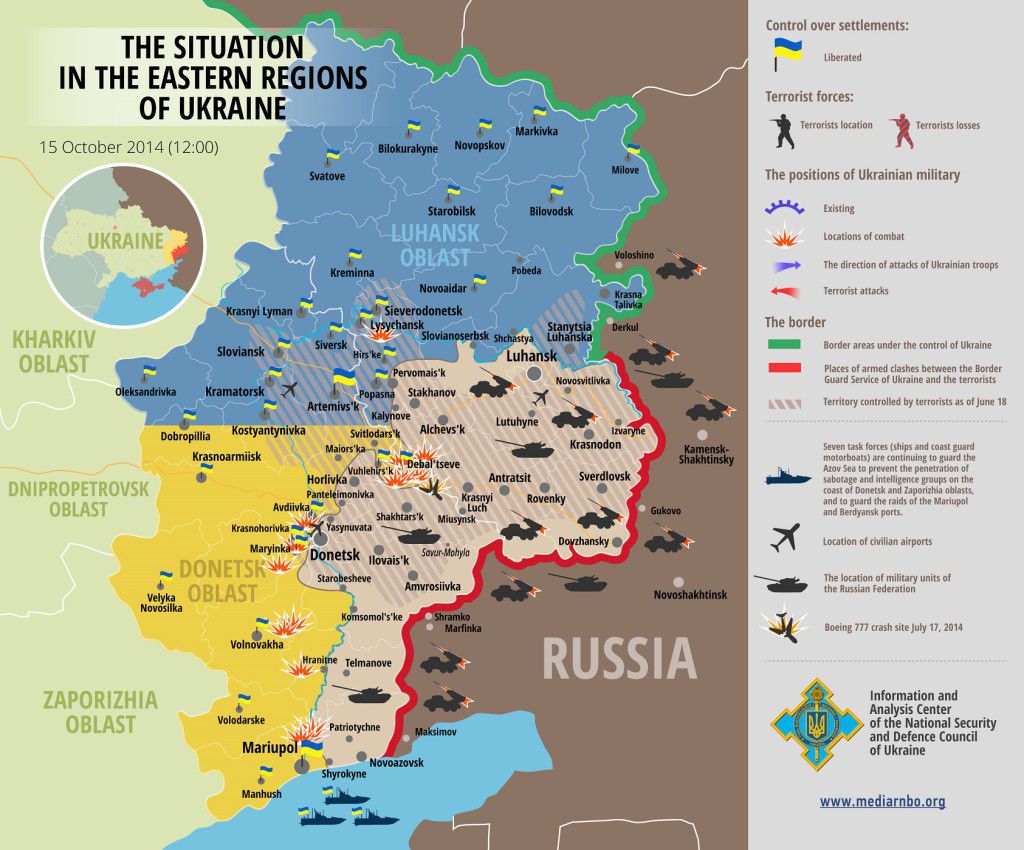 Today was declared a Day of mourning in Mariupol in connection with tragic death of civilians resulting from terrorists’ bombardment of Sartana settlement.

In has been found that a Russian pilotless aircraft was conducting active air reconnaissance in this area on October 14th.  Bombardment of “Sartana” border guard detachment using “Grad” rocket launchers located in the neighbourhood of a seized Shyrokyne populated locality started at 2:30 pm. Border guards incurred no losses in this bombardment.The fire was being adjusted directly from the pilotless aircraft.A funeral train was proceeding on the outskirts of the settlement at that moment and the fire shifted to it.A shell hit directly on the funeral train.According to the preliminary data, 7 inhabitants of Sartana settlement died and 18 were wounded.

Simultaneously terrorist were outshooting ATO forces positions in the area Shevchenko and Talakivka populated localities nearby Mariupol. There are no casualties among our troops either.

In general, the trend of air reconnaissance conducted by illegal armed groupings persists. Pilotless aircrafts activity was recorded 10 times in Mariupol direction, nearby Donetsk and along administrative border with temporarily occupied territory of Crimea. Besides, helicopter flights along the border without Ukrainian aerial domain infringement were recorded on the segment of Sumy border detachment as well as along the administrative border with the Autonomous Republic of Crimea. An aircraft of electronic reconnaissance was observed crossing Ukrainian border nearby Uspenka settlement in Donetsk region.

In general, situation in the ATO zone remains unchangeable. There were no fallen within last 24 hours, information on 12 wounded was corroborated.

Fights continue nearby Bakhmutka populated locality in Luhansk region. Terrorists’ attempts to seize our checkpoints were fruitless. Our troops are protected by engineering constructions, they have sufficient amount of weapons and ammunition, the command maintains contact with them and keeps situation under control. At present our artillery is delivering fire upon positions of terrorists who had attacked our checkpoints. Subdivisions set out to the clashes area to provide help in wiping militants out and liquidating the threat checkpoints are exposed to. We are keeping track of the information from this area and any relevant news will be made public without delay.

Yesterday during the day servicemen of the National Guard defeated attacks at positions in main roads crossing nearby Zolote settlement in Luhansk region.

According to intelligence data received, militants are rotating manpower and equipment, spreading rumour on preparation of attacks at Debartseve, Mariupol, Avdiyivka towns direction in Donetsk region as well as Lysychansk, Syevyerodonetsk and Shchastya towns in Luhansk region.All the abovementioned directions are under Ukrainian troops’ control.

State Border Service of Ukraine finished equipping subdivisions drawing duty in the east of Ukraine with winter clothes and other necessary equipment. Border guards received camouflage, winter jackets, thermal underwear, overcoats, felt boots, headwear and other clothes. At present delivery and distribution of these resources directly from the border guard authorities to the servicemen is taking place. It is expected to finish in 1-2 days.

As we previously informed, the National Guard finished preparation to drawing duties in autumn and winter time.This process is nearing completion in the Armed Forces. Specialized officer of the Minister of Defense is expected to report on winterization progress in the earliest possible timeframe.

Situation in populated localities of the ATO zone

Militants are inventing new ways of civilians and businesses plundering in the territories temporarily controlled by terrorists.For instance, according to intelligence data received, chiefs of “Luhansk Peoples’ Republic” and “Donetsk Peoples’ Republic” terrorist organizations are planning to draw up an inventory of all the idle local enterprises and misappropriate them  afterwards.

Besides, terrorists introduced monthly charges laid on local inhabitants. These charges apply to everyone – miners, taxi drivers and merchants. The criminals demand from local inhabitants to pay the “render” in cash. (information from the Security Service of Ukraine)

Armed clashes between illegal armed groups of terrorists and Russian mercenaries for spheres of influence rearrangement continue in Donbas accompanied by crime rate deterioration. For instance, as we previously informed, armed clashes between “Luhansk People’s Republic” militants and cossacks of “Great Don Army of the Russian Federation” (chieftain—M. Kozitsy) are in progress. Desire of different groupings to control picking up scrap metals and transporting them to Russia became another cause of conflict.

Due to terrorists’ bombardments in Telmanivskyi district of Donetsk region trunk transmission lines were damaged. Electric power supply from Starobeshivska thermal power station to substation in Mariupol town was intermitted. The town receives partial power supply, there is blackout occurrence threat for some plants of Mariupol iron and steel works  named after Illich as well as Azovmash.Repair teams of Donetskoblenerho electricity supply company and the State Service of Ukraine for Emergency Situations subdivisions are currently working on electricity supply renewal.

Works on first temporary town deployment for IDPs from the ATO zone started in Kharkiv nearby the city airport. The town will consist of modular buildings sent to Ukraine as humanitarian aid from the German government . We would like to remind that two other towns of this type will be located nearby Dnipropetrovsk and Zaporizhzhya. In total, all three modular towns are designed for reasonably comfortable living of about 4000 people.

Response of international community to the events in Ukraine

Following the meeting with the Minister of Foreign Affairs of Russia Sergey Lavrov in Paris, the USA Secretary of State John Kerry stated that implementation of 12 provisions of “Minskagreements” was inescapable. In particular, John Kerry emphasized that bombardments of Donetsk airport and other locations in the east of Ukraine were to be terminated, foreign troops and weapons were to be withdrawn from Ukraine and all hostages, Nadiya Savchenko in particular, were to be released.

The prime-minister of Finland Alexander Stubb stated that Russia had been pursuing the policy of intimidation towards other countries. “We feel that  intimidation takes place in the sphere of international policy as well as destabilization of neighbours’ borders on different levels”, – emphasized Mr. Stubb.