Kyiv, September 16, 2015. In the Donetsk sector in ATO zone militants fired three times upon the frontline positions of ATO forces in Rozsadky and Luhanske with small arms over the last day. Trying to make use of the landscape militants came quite close to Ukrainian fortifications and after short-term attacks stepped back. It was quiet near Horlivka, Dzerzhynsk, Yasynuvata, Avdiivka and in the Donetsk airport yesterday. In Maryinka militants were firing upon Ukrainian troops from small arms and grenade launchers. Heavy weapons were not used. Ukrainian Armed Forces did not incur any casualties over the last day. 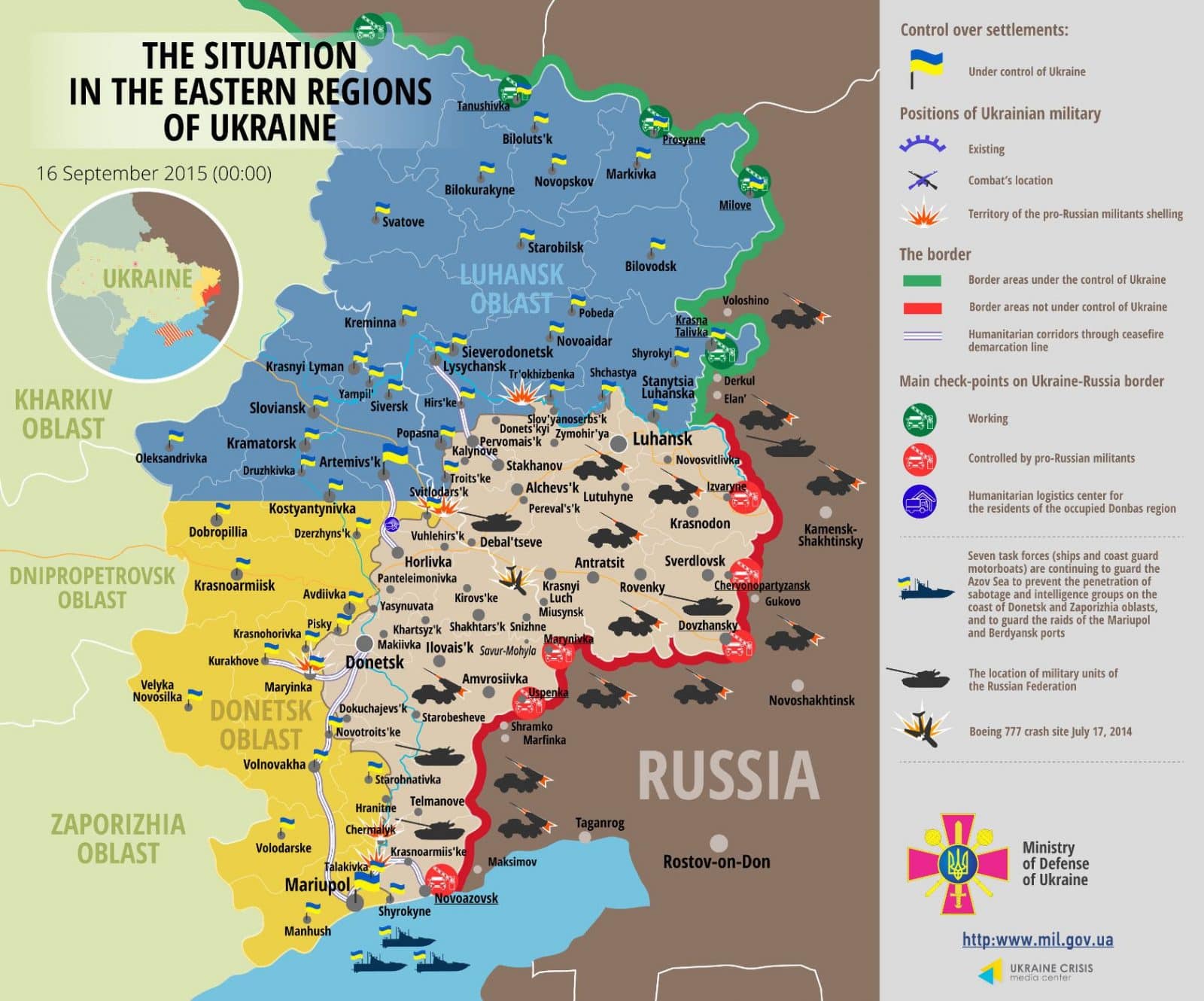 The only hotspot in the Luhansk sector yesterday was Krymske located north of Bakhmutska road. Several militant provocations took place there, thus ATO forces registered the work of militant snipers. Fire was launched from the South.

In the Mariupol sector militants fired several shots from mortars upon Ukrainian positions in Chermalyk yesterday in the morning. Fire was launched from the opposite side of the Pavlopil water reservoir. Another militant provocation took place further to the South, near Hnutove. Two Ukrainian servicemen were wounded in action in the last day.

Border guards detained a man from Yakutiya, the Russian Federation, in Donetsk region who came to fight on militants’ side. Our border guard unit on duty stopped a vehicle with two persons: a female Donetsk native and a Russian citizen in military uniforms bearing militant insignia.

Ukraine’s Security Service continues the program for return of former militants to the Ukraine-controlled territory.

Ukraine’s Security Service is blocking the channels for militant financing. It was discovered that entrepreneurs from Donetsk region had developed a multiple-stage mechanism for cashing the money received from the Russian Federation through the banks. Resulting from the complex fraud schemes in June-July 2015 Russian companies transferred over UAH 100 million (over USD 4,3 million) to fictitious individuals on the territory of Ukraine. It was later planned to illegally bring part of the money to the occupied territories and rest was supposed to be used to finance activities of subversive groups. Accounts of these ‘cashiers’ have been blocked.