National Security and Defense Council: Within the past day 1 Ukrainian serviceman was killed, 9 got wounded

Kyiv, 8 December 2014 – The situation in the anti-terrorist operation (ATO) zone remains complicated. Within the past day terrorists fired 55 times at the positions of Ukrainian troops. 1 Ukrainian serviceman was killed, 9 got injured. Militants were most active in the area of the Debaltseve salient. At this location Ukrainian military positions were shelled four times with Grad multiple rocket launcher systems outside of Debaltseve and five times near villages Chornukhyne and Mius. Population centers Nikishyne, Artemove, Yunokomunarivsk, Maloorlivka, Novoorlivka and Orlovo-Ivanivka were fired upon with artillery and mortars. In Debaltseve area our medical vehicle was ambushed. Militants’ attack was successfully repelled, the enemy suffered losses. 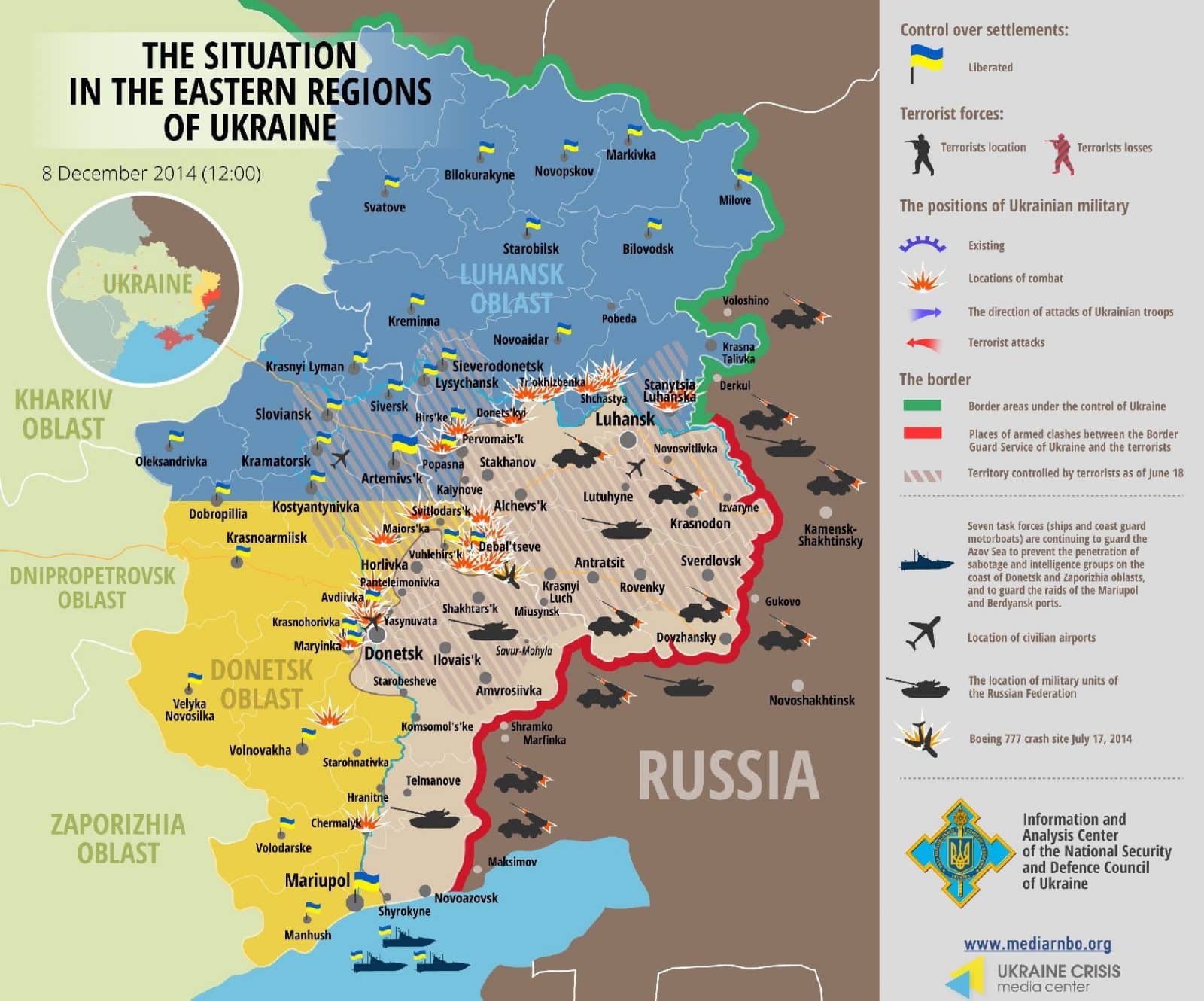 In Donetsk outskirts the airport and adjacent Avdiivka and Opytne were continuously shelled. The airport remains under the control of Ukrainian troops. Along the Bakhmutka road terrorists attacked population centers Krymske, Tryokhizbenka, Frunze and Zolote. Clashes among various militants’ gangs continue in Donbas being a considerable threat to local civilian population. As per field reports yesterday as a result of the mortar-artillery shootout between the terrorists’ groups in Donetsk 10 civilians were killed. The number of injured is yet unknown.

Ukraine’s Security Service keeps withdrawing firearms and ammunition from illegal circulation and detaining militants, within the past day 8 accomplices of terrorists were detained.

President of Ukraine Petro Poroshenko held a meeting with the Ambassador Heidi Tagliavini – Special Representative of the OSCE Chairperson-in-Office to the Trilateral contact group for the implementation of the peace plan in the East of Ukraine. Petro Poroshenko underlined that the Trilateral contact group needs to meet the soonest possible to ensure the ceasefire effective 9 December. The OSCE Special Representative underlined that the Minsk accords and particularly the Protocol of 5 September and the Memorandum of 19 September 2014 are the basis for peaceful settlement of the situation in Donbas.

Yesterday the German Chancellor Angela Merkel accused the Russian President Vladimir Putin of “creating problems” for Eastern European countries which are seeking closer ties with the EU. Moldova, Georgia and Ukraine are three countries in the Eastern neighbourhood that have taken sovereign decisions to sign an association agreement with the EU. According to Merkel Russia violates territorial integrity of the above countries and impedes the resolution of the “frozen conflicts”.