National Security and Defense Council: Ukrainian military control both the old and the new terminals of the Donetsk airport

Kyiv, 5 December 2014 – Within the past day the situation in the anti-terrorist operation (ATO) zone remained stably complicated. Russian mercenaries made three powerful attempts to break through the Ukrainian defense lines. The enemy’s two attacks in the North of the ATO zone – in the area of Sokilnyky population center were repelled. The enemy suffered big losses in manpower and armoured vehicles. Terrorists made an attempt to break through in the area of Opytne village in order to encircle the Donetsk airport, following the precise fire from artillery and small arms the attempt failed. The enemy suffered considerable losses and had to step back. Both the old and the new terminals of the Donetsk airport are under control of the Ukrainian forces. The airport defenders fought back all enemy’s attempts to seize the object. 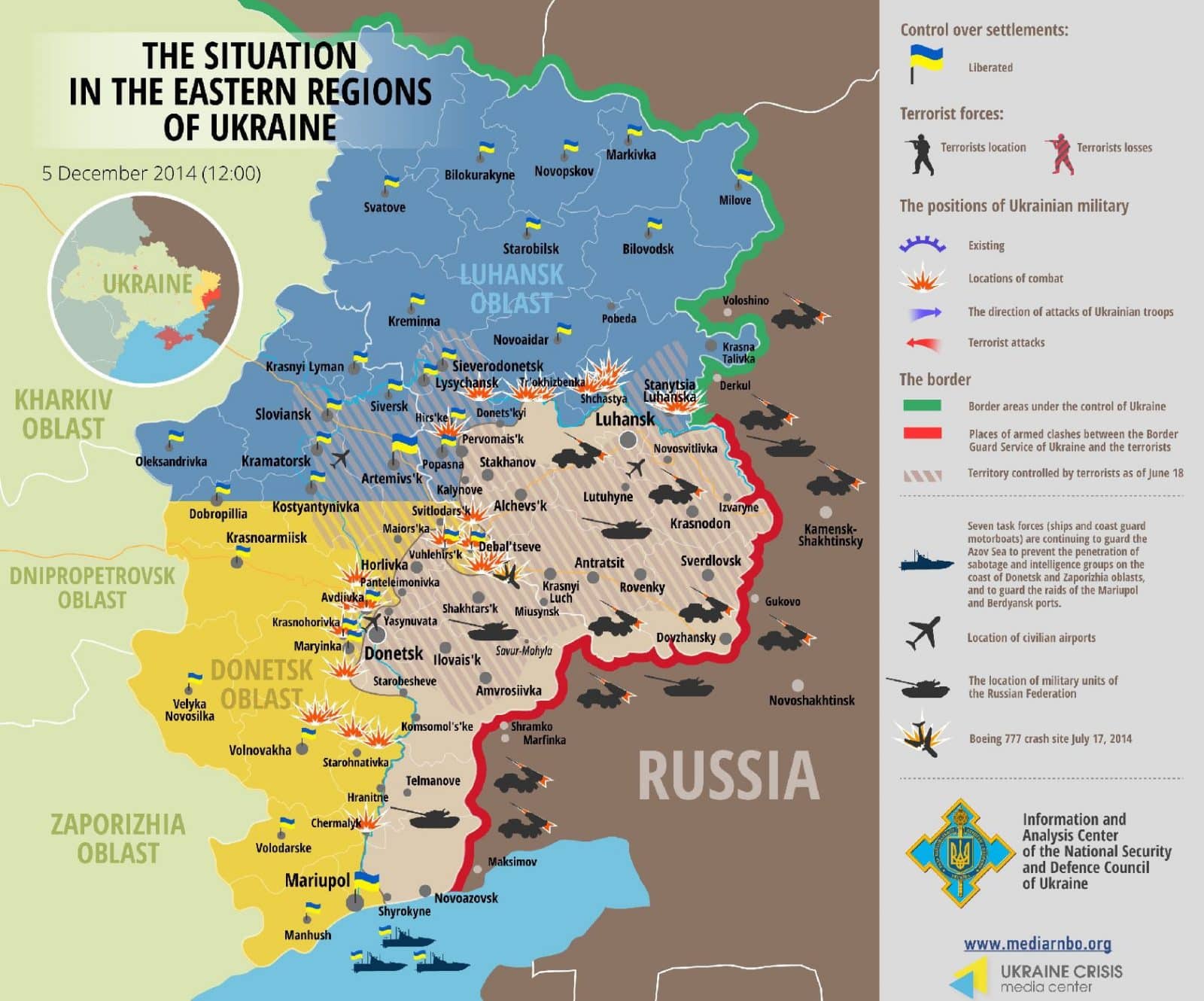 The Russian side keeps moving additional mercenaries’ groups, stocks of armament, military equipment, ammunition, material and technical means to the territory that is temporary controlled by militants. Yesterday information on the deployment of three convoys of (military) equipment from Russia – 200 units in total came in. Yesterday at 8am a convoy of 150 trucks crossed from Russia through Dubrovka directed to Dmytrivka, at 12.10 the second convoy of equipment – 10 fuel tank trucks and 6 combat armoured vehicles. Last night a convoy of 40 trucks (33 of which are fuel tank trucks) was moved through Izvaryne and directed to Luhansk.

At the Donetsk airport terrorists shelled positions of the ATO forces in the area of Pisky population center near Krasnohorivka and Tonenke village with Grad multiple rocket launcher systems. At the Debaltseve direction militants shelled ATO forces positions near Ridkodub population center with BM-21 Grad MRLS. They also used mortars and grenade launchers to fire at the ATO positions near population centers Debaltseve, Vuhlehirsk, Orlovo-Ivanivka, Nikishyne and Mayorske. In all cases provided that there is no threat to civilians our artillery strikes back. Within the past day 6 Ukrainian servicemen were killed, 13 got wounded. UAVs were spotted in the areas of Stary Aydar and Rayhorodka in Luhansk region and near Yalta population center not far from Mariupol.

The President of Ukraine Petro Poroshenko had a phone conversation with the US Vice President Joseph Biden, Vice President Biden said the US is ready to consider further economic and financial support to Ukraine.

US Secretary of State John Kerry in his statement at the OSCE Ministerial Council plenary session said that Russia continues to supply new weapons to eastern Ukraine while Russian soldiers fight and die in a country where they had and have no right to be. “Russia fails to meet its international and OSCE obligations and to live up to an agreement that it actually negotiated and signed,” said Kerry.

Lithuanian Minister of Foreign Affairs Linas Linkevičius calls on the OSCE member states to influence Russia so that it stops threatening its neighbours. “Russian Federation must withdraw its military equipment, weapons, and troops from the Ukrainian territory and seal its borders to the movement of arms and mercenaries into the separatist held areas,” he said.

The House of Representatives of the US Congress adopted a resolution condemning the actions of the Russian Federation that is waging aggressive policy towards its neighbours and aims at establishing political and economic dominance.