Kyiv, 14 March 2015 – Interior Ministry and Security Service of Ukraine specialists have found and seized several caches of weapons and ammunition including man-portable air defense systems, grenades, mines and rounds of ammunition in the cities of Sloviansk, Kramatorsk, Artemivsk and some other locations. 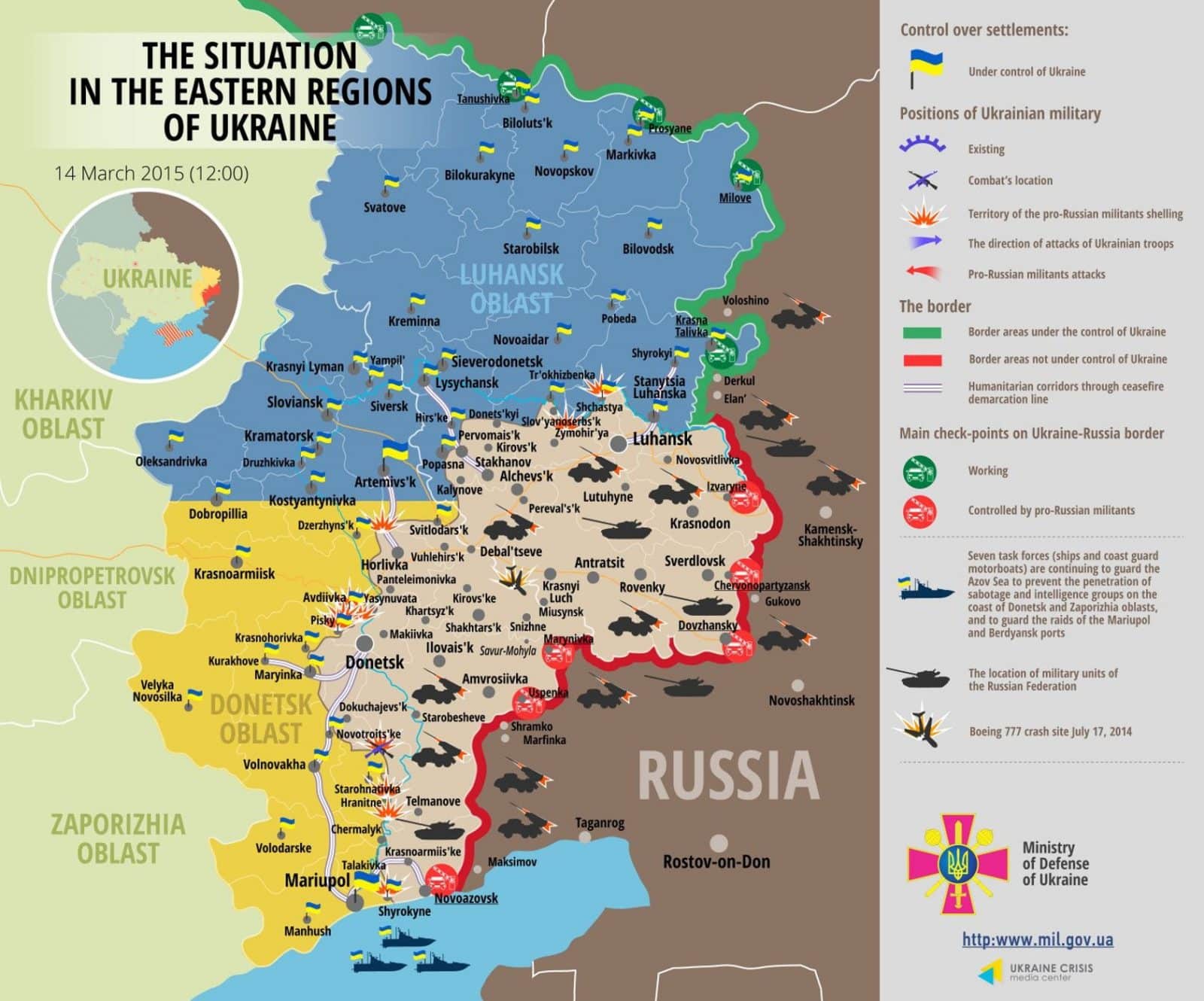 The Russia-backed separatists are trying to destabilize the situation on the government-controlled territory by penetrating into the liberated Donbas areas to conduct provocations. Concentration of the military equipment of the Russian Federation Armed Forces in proximity to the Ukrainian-Russian state border has been observed.

Yesterday, on 13th of March pro-Russian militants have fired 32 times at Ukrainian positions in the ATO zone, including once with artillery in the area of town of Avdiivka. Traditionally the focal points of most intense confrontation are the village of Shyrokyne near Mariupol and the area of the Donetsk airport. On Saturday alone after midnight militants have fired twice at the Ukrainian positions in the area of the Donetsk airport. Over the last day Ukrainian military did not suffer any serious casualties in action, one person was wounded.

Ukrainian border guards detained 4 citizens of Ukraine with fake passes at “Kurakhove” control point, one Ukrainian citizen with the passport issued by the so-called “LPR” illegal criminal group was detained at at “Lysychansk” control point.

Ukrainian servicemen conscripted under the fourth stage of mobilization are currently working out various combat and tactical skills at one of the training grounds in Zhytomyr region. After the training is completed the servicemen will be deployed to reinforce the defense in the ATO area.

There is the continuing delivery of the humanitarian aid, provided by the foreign charity foundations, to Donbas. Representatives of a German charity organization are constantly delivering food and basic items of the first necessity to residents of Donetsk and Luhansk regions. Next consignment of humanitarian aid will be delivered by the state emergency workers within a month. First consignment of the cargo – 14 tons of food has already arrived in Rubizhne of Luhansk region and in Sloviansk of Donetsk region. A total of 46 tons of cargo including food, power generators, chain saws and tents will be delivered.