National Security and Defense Council: Ukrainian Armed Forces do not incur any casualties in the last 24 hours

Kyiv, April 11, 2015. Pro-Russian militants continue armed provocations against the Ukrainian forces; most of them have occurred in the Donetsk sector. Militants have fired from machine guns, automatic grenade launchers and 120-mm mortars in the vicinity of Opytne and Avdiivka. They have also mortared Pisky twice. Ukrainian Armed Forces did not incur any casualties in the last 24 hours. 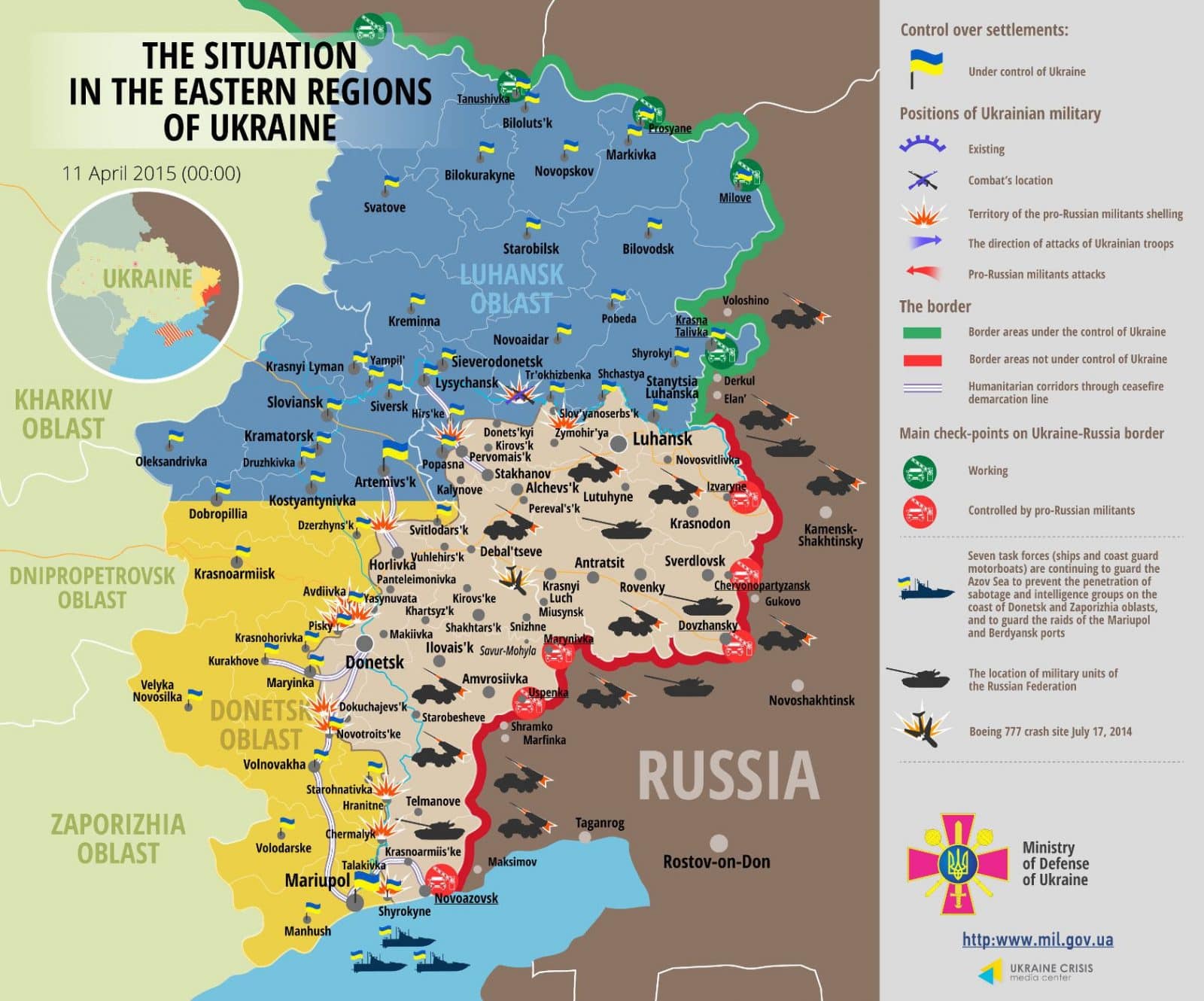 The militants justify their own attacks by spreading the rumors about a potential advance of the Ukrainian forces. We would like to highlight that Ukrainian servicemen strictly observe ceasefire. International monitors from the OSCE Special Monitoring Mission to Ukraine confirm this as well.

Ukrainian border guards spotted 21 enemy UAVs, which indicate that militants are still conducting aerial reconnaissance of the frontline positions. Overall the Ukrainian troops monitored 30 UAVs; one of the militant drones was taken down in the Luhansk region.

The OSCE press-service reported that the “LPR” insurgents illegally transfer coal from the Luhansk region to Russia. Also, members of this militant group disarm so-called Russian “Cossacks” regiments who refused to join the “LPR militia” forces.

70 unexploded ordnances have been deactivated in Donetsk and Luhansk regions over the last day thanks to the efforts of Ukraine’s Emergency Service.

Meanwhile, Ukrainian soldiers detained one of the pro-Russian insurgents in the Luhansk region. He was severely wounded and sent to the Main Military Clinical Hospital in Kyiv. The investigation showed that he did not kill any of our soldiers. It was decided to release him back home. Two more “LPR” militants gave themselves up voluntarily to Ukrainian servicemen in the area of Zolote village, Luhansk region.

Ukraine’s Security Service detained a turncoat policeman who was hired by the Russian intelligence. He was working on an artificial “drug trafficking route via Ukraine”. Russian law enforcers were supposed to catch him on the Russia-Ukraine border, and then spread the news through the Russian media to discredit the Ukrainian state. This Putin’s hireling was promised a reward of $1,700 for such a primitive provocation. His was collecting information about the location of Ukrainian forces in the Dnipropetrovsk region as well. He is now accused of treason.

President of Ukraine Petro Poroshenko awarded 69 Ukrainian soldiers, policemen and emergency workers for their distinguished service. They were honored with the Orders of Merit and Orders of Bohdan Khmelnytsky of various classes.