Kyiv, May 30, 2015. Joint forces of the Ukrainian and Moldovan counter-intelligence detained a pro-Russian field commander of the “Somali” battalion, nom-de-guerre “Academic”, who fought as the artilleryman in the ranks of the so-called “Donetsk People’s Republic”. The militant arrived to Chisinau by plane. 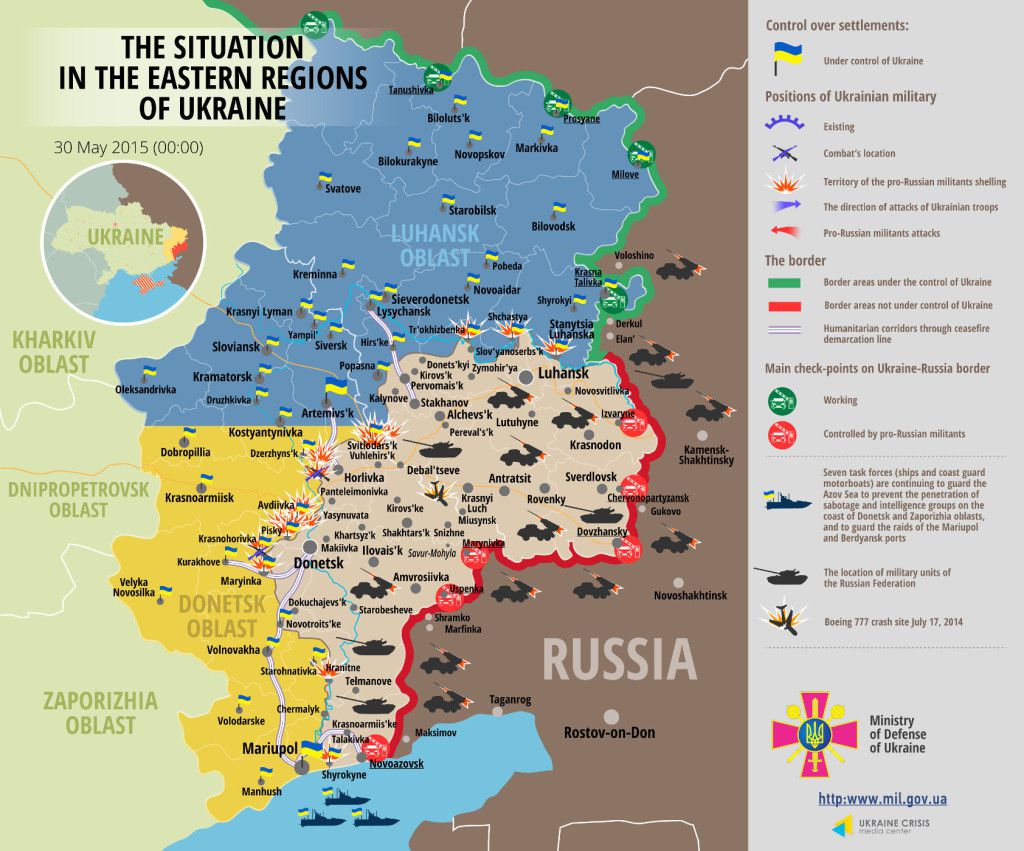 A detained militant completed a course of military drills on one of the training fields near Makiivka, Donetsk region, under the guidance of the Russian GRU operatives. The militant commanded an artillery company of pro-Russian fighters between August 2014 and May 2015. He personally coordinated and led the attacks on the Ukrainian Armed Forces stationed near the Donetsk airport, Snizhne, Ilovaysk, Debaltseve and Avdiivka. Detained militant has been transferred to Ukraine.

Russia-backed militants continue using heavy weapons prohibited by the Minsk agreements. They have fired from 120-mm mortars seven times and five times from the 122-mm artillery. Enemy tanks have been used twice.

Major hotspots of the conflict focused in the Donetsk sector. Most ceasefire violations occurred near the Donetsk airport, in the outskirts of Horlivka as well as on the southwestern edges of Donetsk. Two military clashes took place near Shyroka Balka village and Krasnohorivka respectively. Ukrainian troops retaliated, forcing the enemy to flee after suffering casualties.

Shchastya, Tryokhizbenka and Stanytsa Luhanska have been hotspots in the Luhansk sector, while the intensity of fighting in the Mariupol sector, particularly around Shyrokyne, has decreased. Pro-Russian militants violated ceasefire four times after 6 pm in the area.

The new OSCE report published on May 28 highlights that “DPR” militants use children: “International monitors spotted a child aged between 12 and 14 years old in Makiivka who was wearing a camouflage and carrying an assault rifle. The child was guarding one of the blockposts near the city.”

President of Ukraine Petro Poroshenko awarded Ukrainian servicemen who captured two Russian Special Forces intelligence operatives on May 16. Three officers of the 92th Mizhanized Brigade were awarded with the Order of Bohdan Khemlnytsky (third class). Three soldiers who personally detained Russian soldiers were awarded with the order for Courage (third class). The regiment’s driver, Vadym Pugachev, who died in the clash with Russian operatives, has been decorated with the same award posthumously.