Kyiv, March 25, 2015 – Ukraine’s Security Service neutralized informers of Russian-backed militants. One of them was detained in the district of Stanytsia Luhanska in the Luhansk region. He has gathered intelligence about the location of Ukrainian military blockposts, the number of servicemen and their weapons for the Russian intelligence. Ukrainian operatives detained other two informers in Mariupol and Krasnohorivka, as well as a “DPR” militant in Sloviansk. 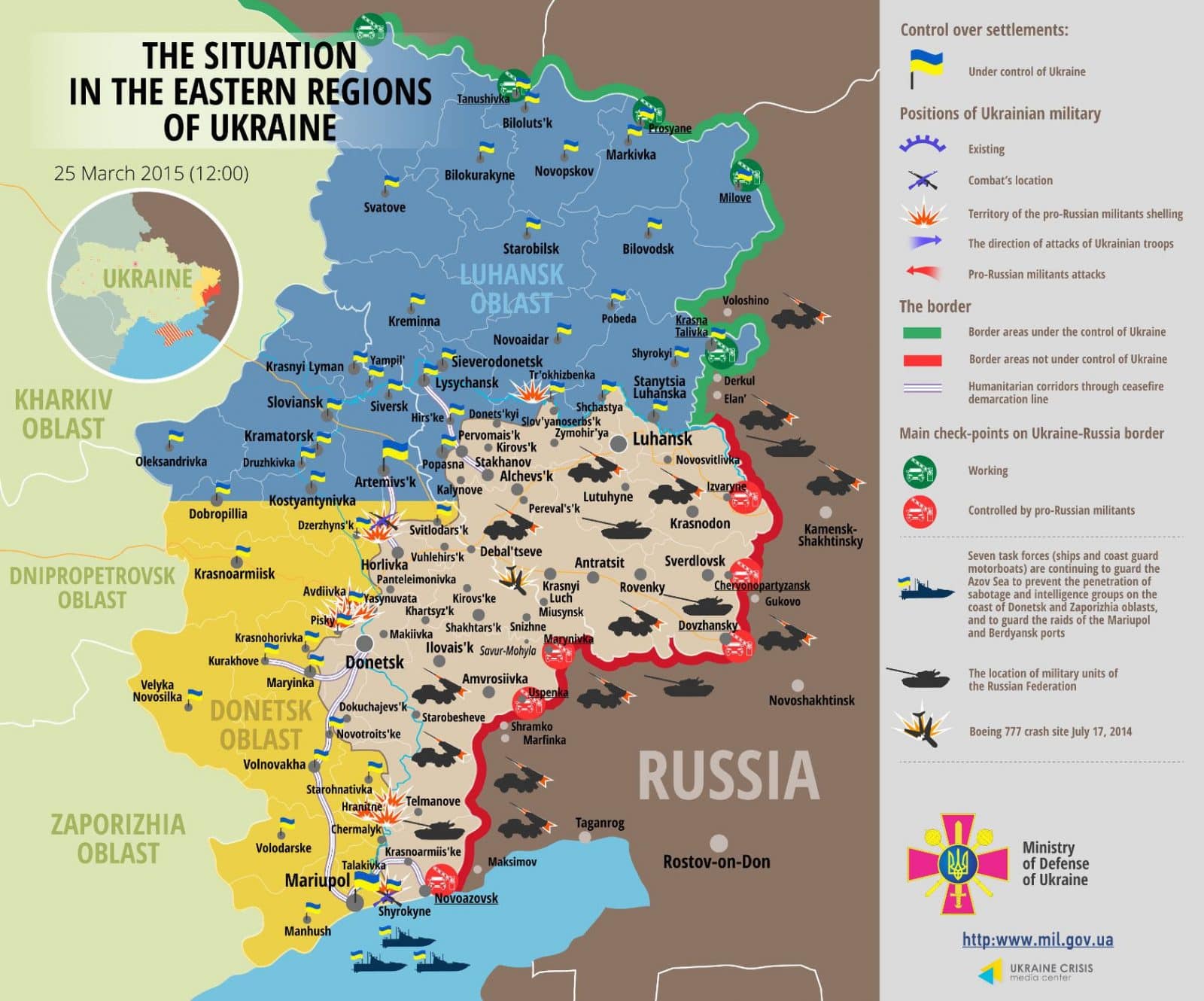 Russia-backed militants fired at the Ukrainian military positions along the entire contact line. The areas around the Donetsk airport remain the hotspot of the conflict. Militants attacked our foothold near Avdiivka from tanks. No cases of artillery shelling by the militants were recorded. After midnight militants have instigated four armed provocations against the Ukrainian troops, using mortars and anti-aircraft systems.

Pro-Russian militants still struggle to take the entire area around Shyrokyne to the east of Mariupol. The observers from the OSCE Special Monitoring Mission recorded the explosion of 82-mm mortar mines above the Ukrainian positions near Bardyanske close to Shyrokyne.

Ukrainian Armed Forces did not suffer any lethal casualties in the last 24 hours; four Ukrainian servicemen got wounded.

Meanwhile, Ukrainian servicemen engage in close contacts with the local population of Donbas. Officers of the military-civic cooperation regiments delivered humanitarian aid to the internally displaced persons who temporarily reside in Velykonovosilkivsky district, Donetsk region. Also, Lviv policemen in the ATO zone are going to meet local civic activists to improve relations between the Donetsk and Lviv regions.

At the end of the briefing Senior Lieutenant Pavlo Solodko of the Ukrainian Armed Forces presented a new website about the military conflict in eastern Ukraine called Ukraine Under Attack, which was designed to become a comprehensive source for the news on the situation in the ATO zone, chonology of the conflict and the database of crimes committed by Russia-backed militants. The website also contains the terms and conditions to get accreditation and the ATO press-card for Ukrainian and foreign journalists. The website is available in English and Ukrainian.