Kyiv, January 8, 2014. This morning, Russia unilaterally sent the 11th “humanitarian convoy” to the east of Ukraine. Representatives of the International Red Cross did not oversee the convoy movement. Apparently, 122 Russian trucks entered the territory of Ukraine through two checkpoints – “Donetsk” and “Matveev Kurgan” (Russian Federation). 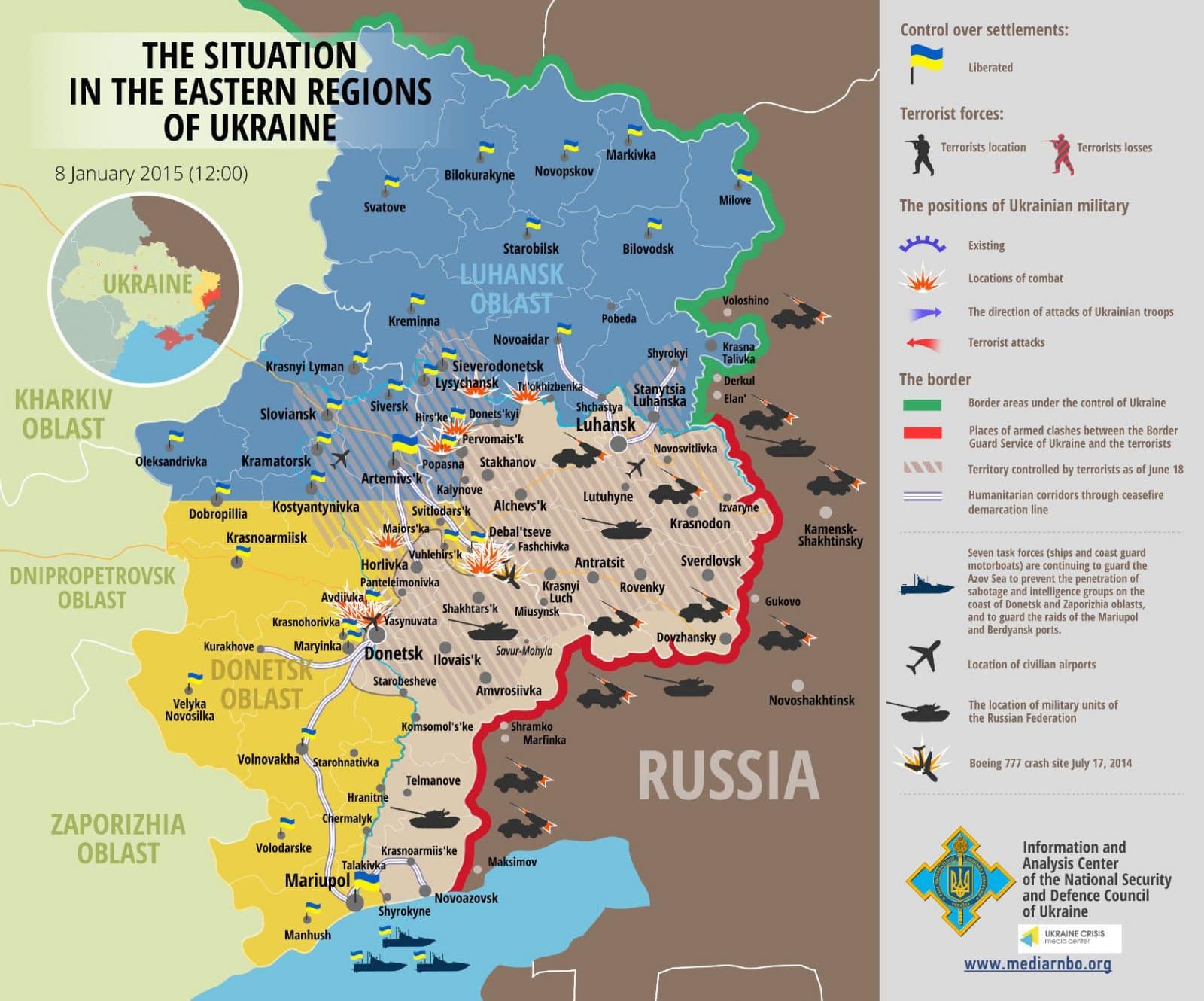 Members of the illegal criminal groups fired on positions of Ukrainian military in Donetsk and Luhansk areas. Beside small arms and mortars, terrorists used multiple “Grad” and “Uragan” rocket launchers. Also, near the village of Krymske in Novoaydarsky district, terrorists attacked a checkpoint of the National Guard of Ukraine, but the military repelled the attack. Two Ukrainian soldiers were injured in the last 24 hours.

Today at 7 am the border guards unit spotted one enemy drone near the village of Velyka Novosilka of Donetsk region. According to intelligence reports, Russia continues to accumulate the military forces by transferring military equipment and personnel to Ukraine. The most active process of forces accumulation takes place in Donetsk region.

In the occupied territories of Luhansk region the terrorists organized smuggle schemes of medical supplies from the Russian Federation through the checkpoint “Izvaryne”.

Terrorists start an information campaign against Ukraine. In the “DPR”-controlled territory, terrorists prepare to issue the newspaper “Peaceful Donbas”. Broadcast of the two Russian channels banned by Ukrainian authorities has started in Donetsk.

A citizen of Ukraine travelling on the “Donetsk-Alexandrovka” bus has been detained by the Ukrainian border guards. During the search the border guards found body armor, “RG-42″ grenade and a certificate of a “DPR police” criminal group.

Military groups of civil-military cooperation visited an art school in Debaltseve and gave children toys and sweets. School students threw a concert for Ukrainian military men. In addition, the Ukrainian soldiers brought more than a thousand units of roofing slates to one of the towns in Luhansk region. The roofing material, so needed by the locals, was purchased with charity funds and delivered by Ukrainian Army trucks.

The volunteers from the city of Pavlograd in Dnepropetrovsk region brought 35 camouflage cloaks for Ukrainian servicemen. Volunteers sewed cloaks themselves. Money for the fabric was donated by doctors and school students of the city.
08.01.2015