National Security and Defense Council: Russian side amasses its military contingent along the Ukrainian-Russian border

Kyiv, 17 January 2015 – In the last day the situation in the anti-terrorist operation (ATO) zone is being characterized by continued fire and attacks at the ATO forces positions by mixed Russian-terrorist groups. Along with blatant violation of the Minsk accords on the part of militants the Russian side is reinforcing its military contingent along the Ukrainian-Russian border. As per the reconnaissance data modern heavy equipment of the Russian Federation Armed Forces is seen deployed near Rostov-on-Don. It includes TOS-1 Buratino, S-300V surface-to-air missile systems, Smerch 9K58 and Uragan 9K57 multiple rocket launcher systems, T-90 and T-72V3 tanks, BTR-80AM APCs. The above weapons are being moved to the Ukrainian territory once in a while and used to fire at Ukrainian Armed Forces positions. New electronic surveillance and reconnaissance systems, electronic warfare systems and small arms are being tested. Thus Russia is cynically using Donbas as a proving ground to test new weapons and equipment disregarding potential civilian victims. 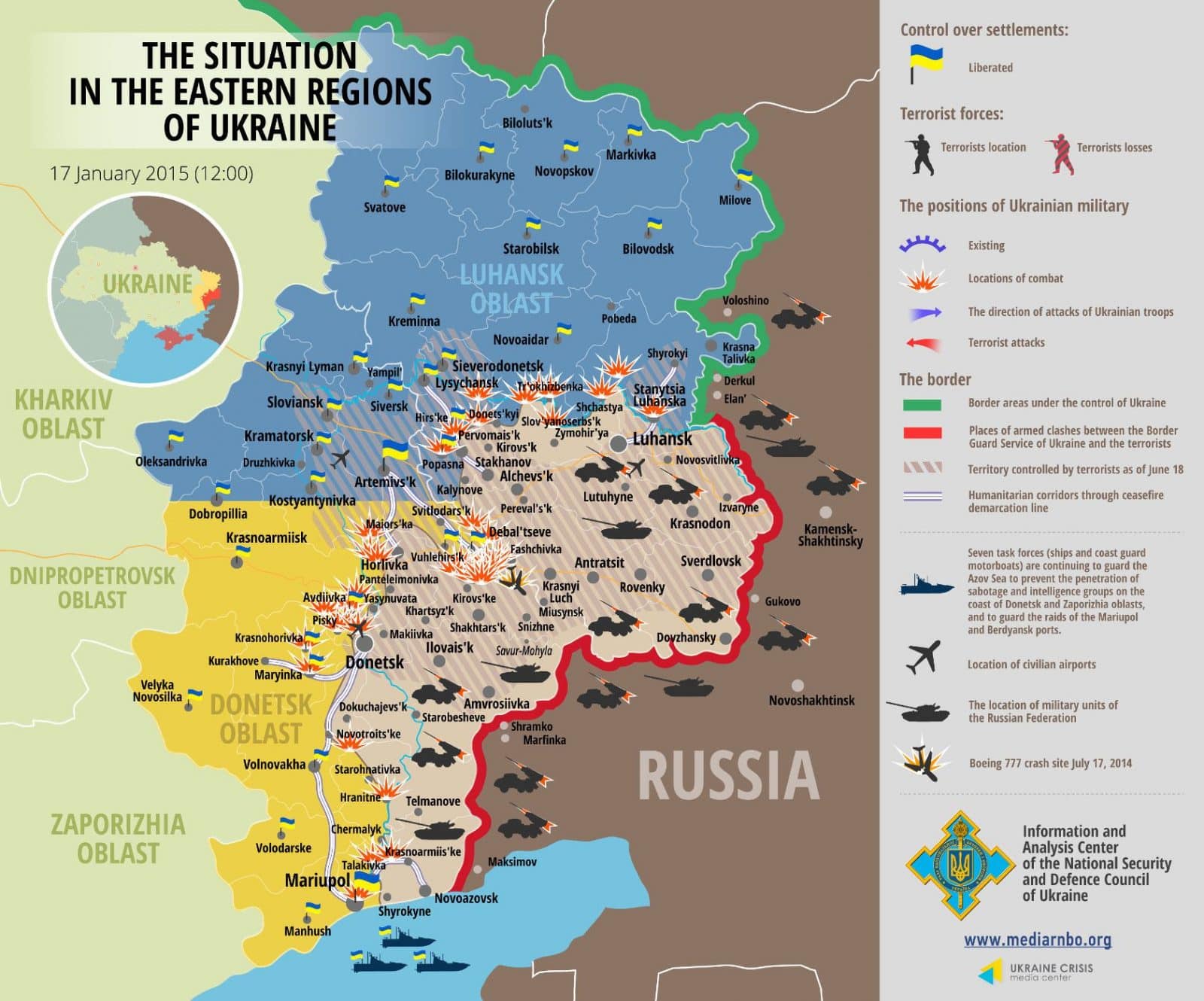 The combat at the Donetsk airport goes on. Militants attacked the Ukrainian troops’ positions at the new terminal and at the air control tower areas. Ukrainian servicemen repel terrorists’ attacks inflicting heavy losses on them. Military doctors of the Dnipropetrovsk military hospital are rendering qualified medical aid to the wounded “Cyborgs”. The military hospital is fully equipped and supplied with the necessary medicines to treat and rehabilitate Ukraine defenders.

At night due to militants firing at the ATO positions and at localities the access of vehicles and persons through Georgiivka and Kurakhove access control points at the Donetsk-Kurakhove road direction was temporarily stopped. We herewith inform that effective 24.00 on 18 January 2015 the road corridor Luhansk-Shchastia-Novoaidar will be closed. At the same time a new road corridor Stakhanov-Parvomaysk-Zolote-Hirske-Lysychansk will be opened with an access control point on both entry and exit at Lysychansk.