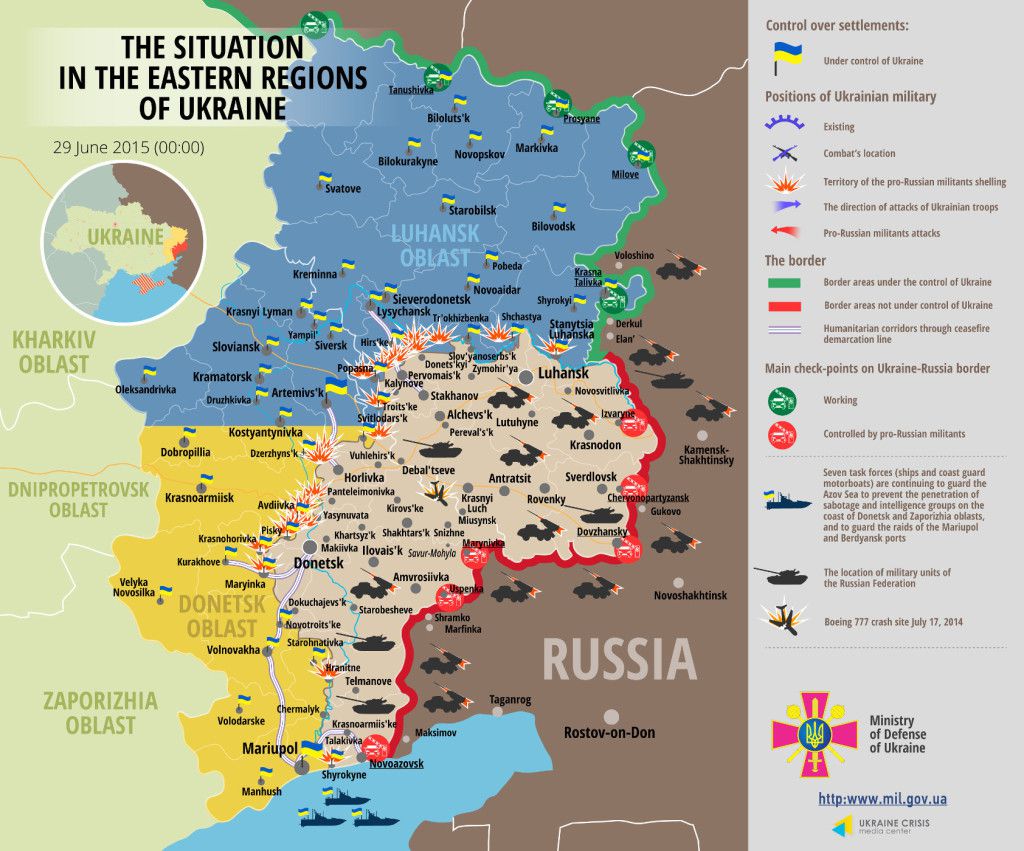 In the Luhansk sector, militants fired upon and tried to advance to government-controlled territories by Novotoshkivske. Power supply to the outskirts of Popasna and several adjacent villages has been suspended due to the militant artillery shelling. Militant groups also fired at Stanytsia Luhanska, Stary Aidar, Krymske and Zolote.

Most of armed incidents occurred in the Donetsk sector where militants used mortars, grenade launchers, tanks, infantry combat vehicles and small arms. Western outskirts of Horlivka, airport area, Maryinka, Krasnohorivka and Avdiivka have been the epicenters of fighting.

Situation in the Mariupol sector has somewhat calmed down; thee armed provocations observed near Hranitne, while intensity of fighting around Shyrokyne has increased in the nighttime.

Ukrainian Armed Forces did not incur any lethal casualties; five servicemen got wounded in action in the last 24 hours.

Mikhail Yemelyanov, Deputy Head of Faction Russia’s Spravedlivaya Rossiya [Just Russia Party] of the State Duma, stated that political authorities of the Russia’s Rostov region would provide all kinds of support to militants of the so-called “DPR” and “LPR”. With such statements the deputy shares responsibility of the Russian authorities for fueling the war in eastern Ukraine.

Ukraine’s Security Service detained three informants of Russia-backed militant groups. Two of them –residents of Velyka Novosilka of the Donetsk region – gained nom-de-guerres Brat Nelson [Brother Nelson] and Staryi Grek [Old Greek]. They were recruited by the so-called “DPR” militant with a nom-de-guerre Smith. Militants were collecting information on deployment sites of the Ukrainian forces, their equipment and weapons. The third detainee underwent military training on the militant-controlled territories in Telmanove last February together with a Russian citizen, nom-de-guerre Kedr, who has joined the militants. Since March 2015, he was part of the militant subversive reconnaissance group.