Kyiv, June 19, 2015. Russia-backed militants fired at a UAV of the OSCE Special Monitoring Mission in the area of Shyrokyne, while a signal of another mission’s UAV was constantly jammed. Mission report notes that militants were possibly using modern electronic warfare systems that proves, once again, that militants are supplied with state-of-the-art military equipment from Russia. 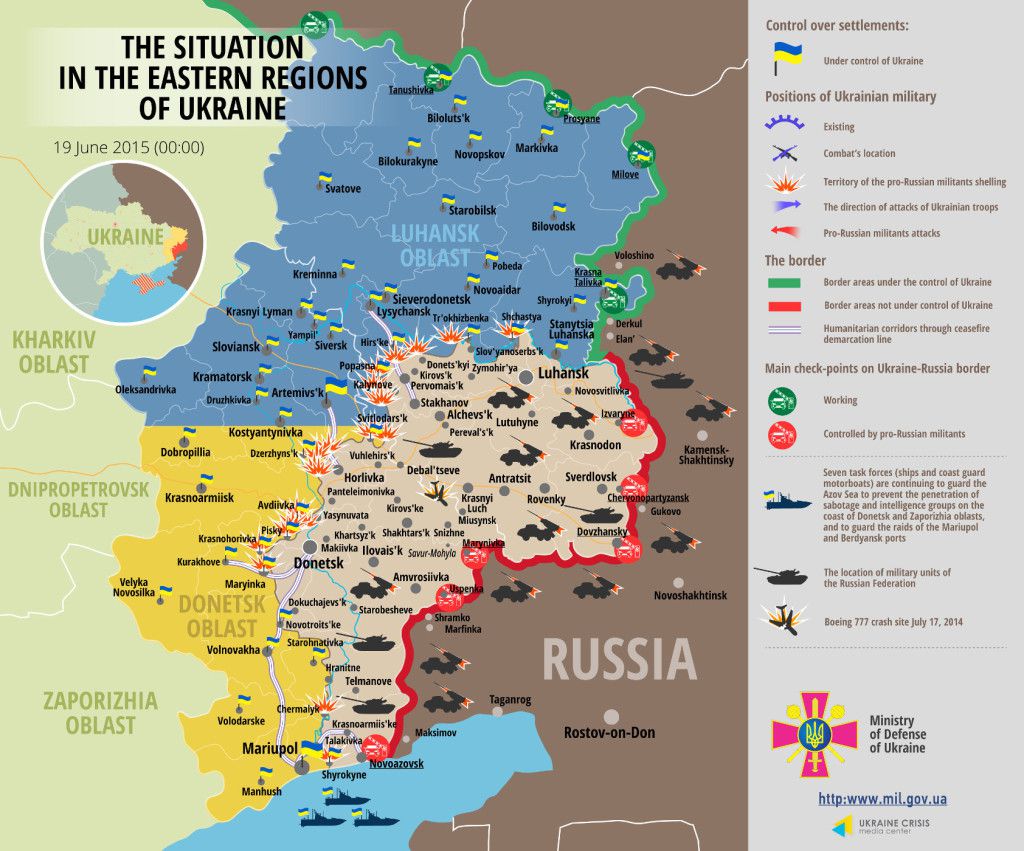 In the Mariupol sector, Shyrokyne was the epicenter of combat actions. In addition to using small arms and mortars militants fired at least three more times at Ukrainian military positions from 152-mm artillery hidden in Sakhanka. They have also instigated several armed provocations in Chermalyk, firing from the eastern bank of the Pavlopil water basin.

In the Donetsk sector, militants attacked Ukrainian troops in the area of Maryinka and Avdiivka; activities of the enemy sniper and 120-mm mortars were observed. Militants kept firing at Luhanske and Svitlodarsk for the whole day as well as attacked Ukrainian positions by Vodyane from tanks and 122-mm artillery at night.

In the Luhansk sector, ceasefire regime was holding only in the area of Stanytsia Luhanska. Militants shelled areas near Novotoshkivske from Grad multiple rocket launchers. The enemy fired at Ukrainian positions from 120-mm mortars near Zolote and Popasna.

Ukrainian Armed Forces did not incur any lethal casualties; one serviceman got wounded in action in the area of Avdiivka in the last 24 hours.

The U.S. Senate approved the country’s defense budget part of which allocates a $300 million worth military aid to Ukraine, including the means electronic warfare and counterbattery systems, anti-tank weapons as well as participation of the U.S. Army servicemen in training of the Ukrainian Armed Forces and the National Guard. The bill still has to pass the presidential approval.