Kyiv, May 12, 2015. Russia-backed insurgents intend to derail the peace plan for conflict resolution in eastern Ukraine as they continue moving heavy military equipment to the edges of militant-held territories. On 9-10 May, monitors of the OSCE Special Monitoring Mission to Ukraine noted 50 militants training on the boundary between the Luhansk and Donetsk regions on the territory controlled by the so-called “Luhansk People’s Republic”. Moreover, the monitors observed the weapons’ movements in violation of Minsk agreements. In the territories controlled by the “DPR” militants, the SMM observed six T-72 tanks, three self-propelled artillery systems, three Grad multiple rocket launchers, three anti-aircraft guns and three 152-mm artillery systems. A number of self-propelled artillery systems, howitzers, tanks, Grad multiple rocket launchers and anti-aircraft guns were also spotted in the vicinity of the frontline in the Luhansk region. 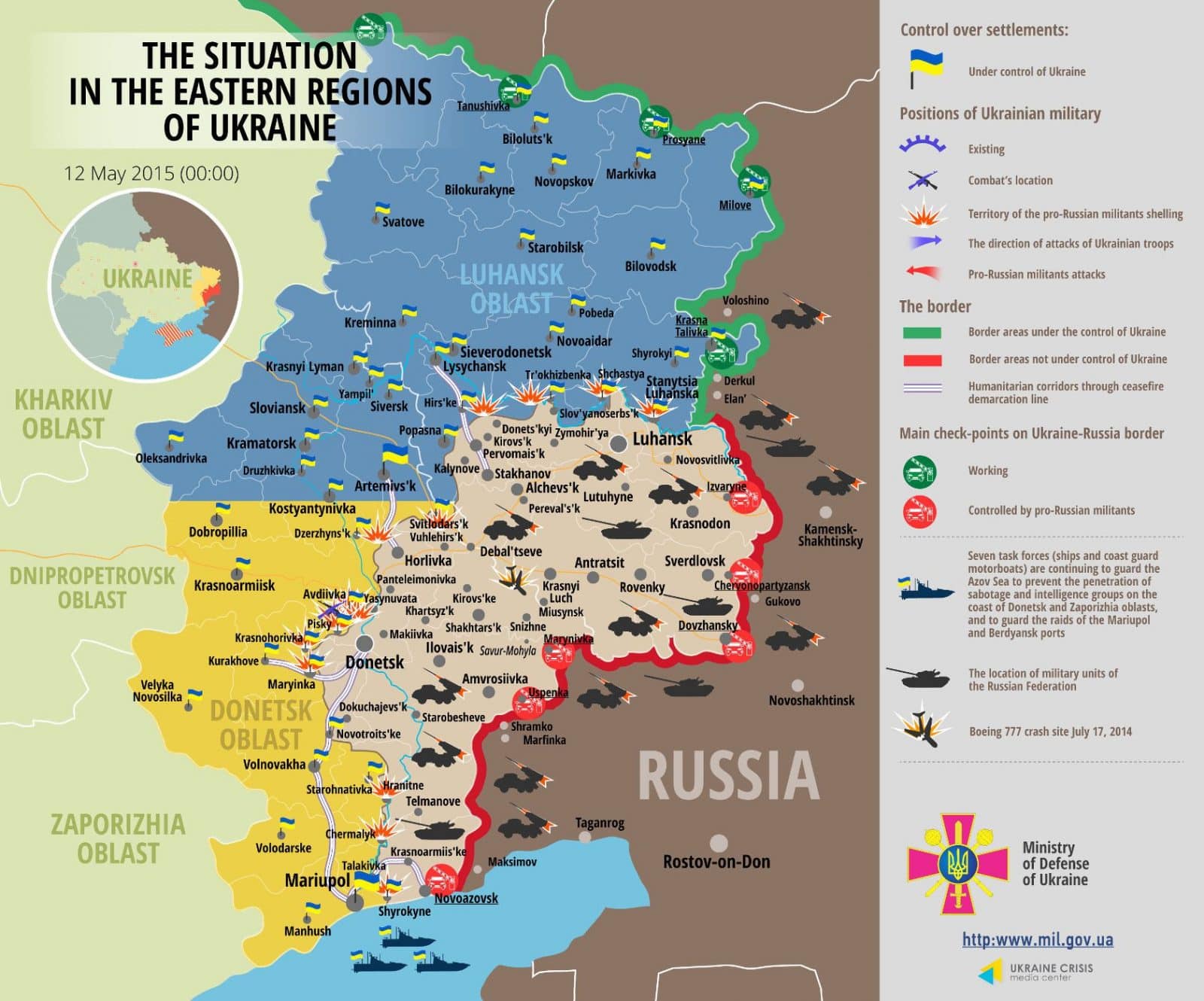 Most of fighting have occurred in the Donetsk sector yesterday, particularly in the area stretching from Maryinka and Avdiivka; pro-Russian militants fired from 120-mm mortars. Ukrainian military positions in the area of Horlivka and Svitlodarsk came under fire as well. Shyrokyne, Shchastya and Stanytsia Luhanska remained the hotspots of the conflict in Mariupol and Luhansk sectors respectively.

Three Ukrainian servicemen were killed in action and one got wounded in the last 24 hours.

Meanwhile, military-civic cooperation regiments of the Ukrainian Armed Forces delivered humanitarian aid and medical drugs to the Artemvivsk hospital where a number of wounded soldiers are treated.

Since the beginning of ATO, the Donetsk police registered 1,409 people as suspect members or informers of pro-Russian militant groups. Charges were presented to 393 persons; 374 of them have been arrested. Furthermore, 1,016 persons are currently in the wanted list.

Minister of Foreign Affairs of Canada Robert Nicholson told during the meeting with the President Poroshenko that is going to provide 30 million CAD to Ukraine for humanitarian purposes.