Kyiv, February, 16 2015. Fighting near Debaltseve direction continues in spite of the ceasefire achieved in Minsk. Pro-Russian militants fired at our positions 88 times in this sector over the last day. The enemy uses Grad multiple rocket launchers, tanks, artillery and mortars against Ukrainian forces. Militants denied access to Debaltseve for the OSCE observers, which is a blatant violation of the Minsk agreements. 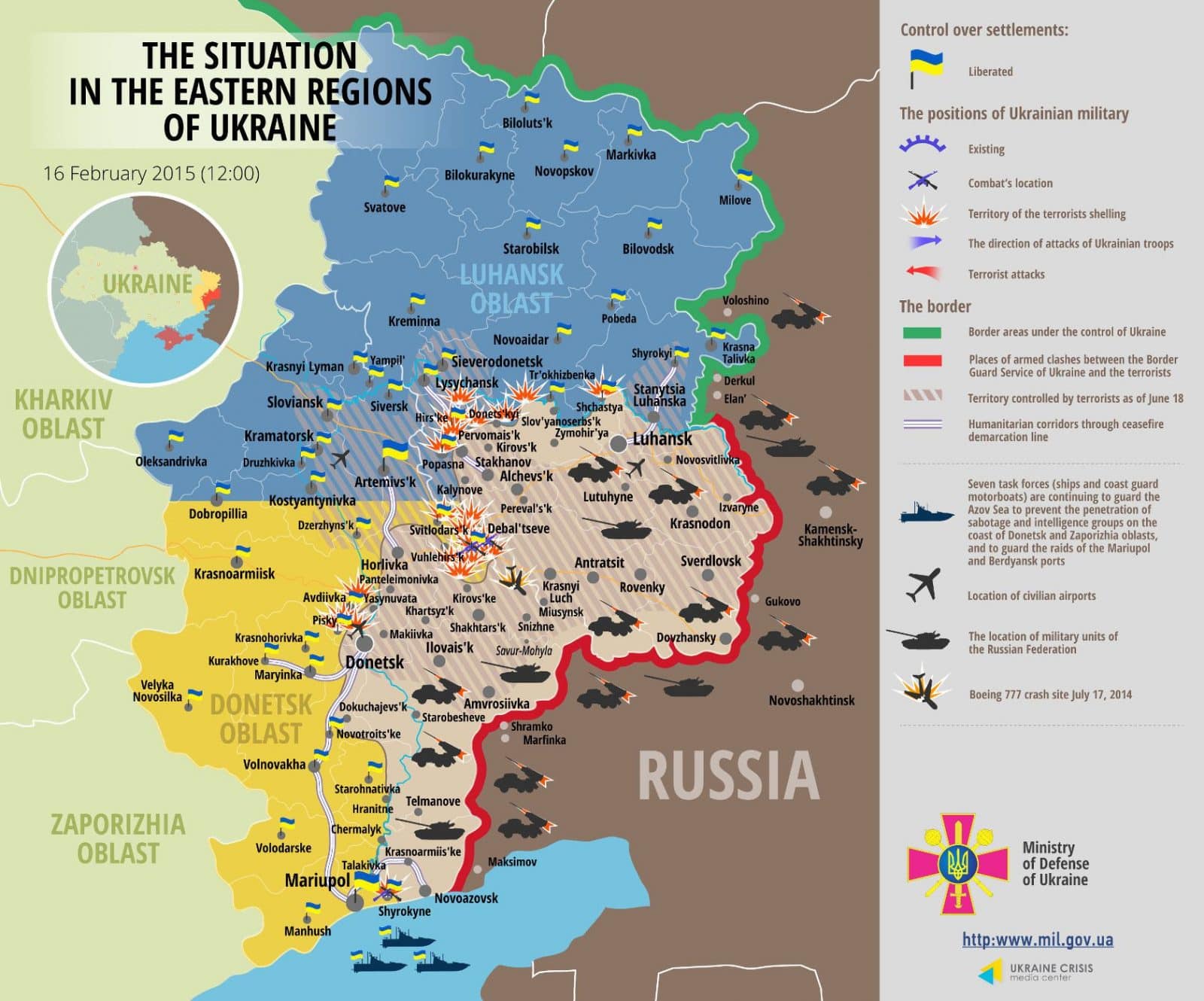 Militants violated the ceasefire regime in Luhansk region: Popasna, Chornukhyne, Zolote and Hirske came under artillery strikes. Skirmishes continue in Shyrokyne at the Mariupol direction . As of 11:00, February 16, insurgents fired 129 times at positions of the Ukrainian forces, aiming to exhaust and gradually force them out of the territories they hold. Ukrainian Armed Forces only returned fire.

Militants are actively conducting aerial reconnaissance –ATO forces noted 6 flights of enemy’s UAVs over the last day; 3 of them in the area of Hnutove and Shyrokyne near Mariupol. Ukrainian Armed Forces downed 7 UAVs at the areas of the ATO zone over the last month 5 Ukrainian servicemen were killed and 25 were wounded in the last 24 hours.

Another “humanitarian convoy” from Russia invaded the territory of Ukraine. 176 trucks crossed into Ukraine via Russian checkpoints “Donetsk” and “Matveev Kurgan”. The Russian side has notified Ukrainian authorities only about 150 trucks. Considerable part of vehicles were not carrying a humanitarian cargo. It contained fuel and automotive oils, rolled paper for printing and unidentified printed materials. The convoy traditionally split in two parts: 90 vehicles headed towards Donetsk, and the rest toward Luhansk. The cargo was brought in and transported in breach of the international and Ukrainian laws; a joint group of Ukrainian border guard and customs officers conducted only visual inspection of the vehicles as they passed. Representatives of the International Committee of the Red Cross did not take part in clearing and inspecting of the cargo either.