Kyiv, April 8, 2015. Militants of the so-called “DPR” stopped a vehicle of the OSCE monitoring mission at a block post near Shyrokyne, Donetsk region. The mission’s report notes that an SMM member approached the block post on foot when he encountered warning shots of heavy machine gun fire to his right, and semi-automatic rifle to his left. We want to highlight that threatening the lives of the OSCE observers and restricting their freedom of movement is a blatant violation of the international law and Minsk agreements. 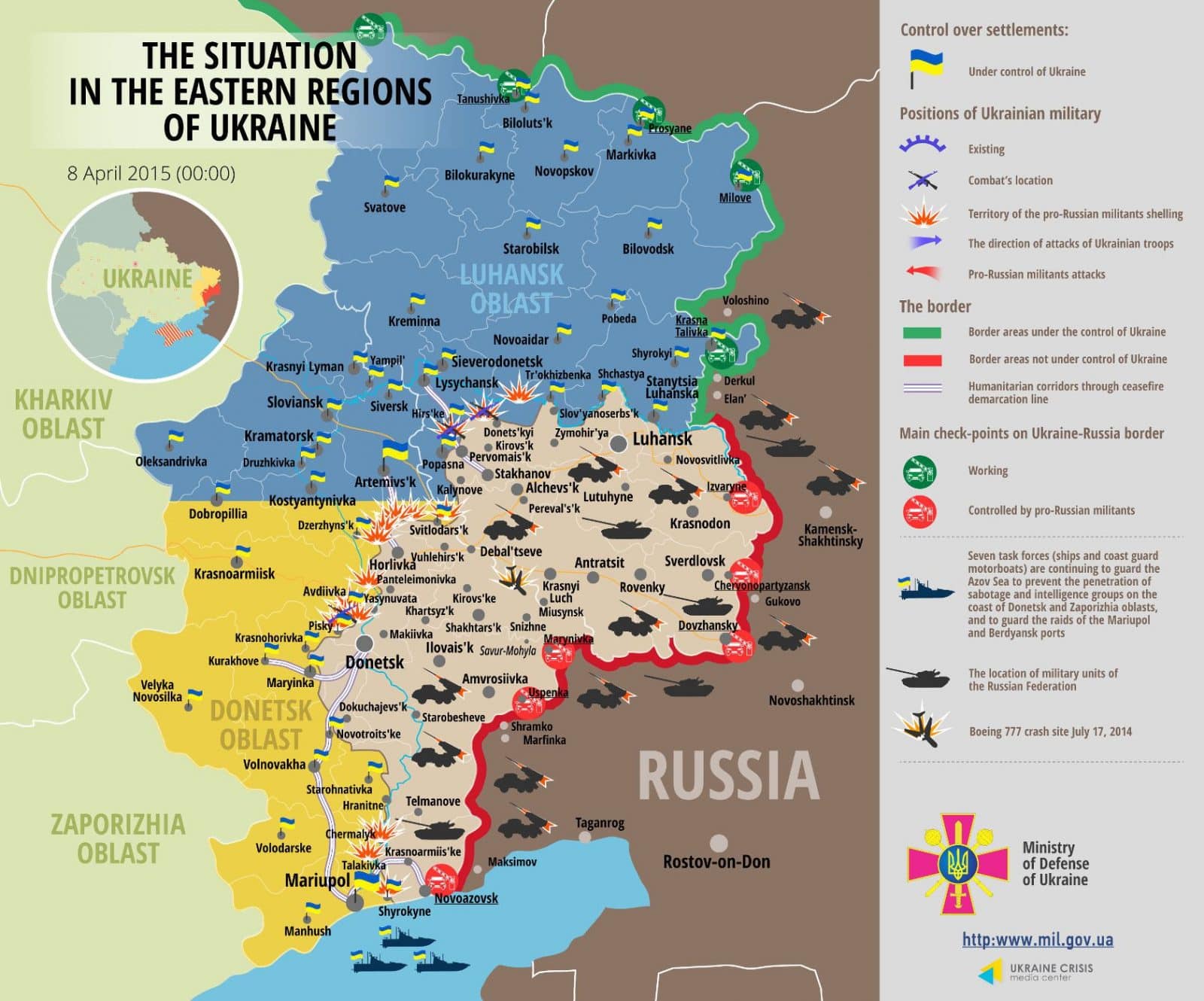 While Ukraine has been adamant in its compliance with Minsk agreements, including the withdrawal of heavy weapons from the demarcation line, pro-Russian militants continue attacking the Ukrainian troops. Russia-backed militants attacked our positions from 120-mm mortars five times, three times from the artillery, and at least five times with tanks and IFVs yesterday. The hotspots of the conflict ranged from Shyrokyne and Chermalyk in the Mariupol sector to the towns of Opytne, Avdiivka, Mayorsk and Luhanske in the Donetsk sector, and Novotoshkivske and Sokilnyky villages in the Luhansk sector.

Two Ukrainian servicemen were killed in action and four got wounded in the last 24 hours.

Russia keeps supplying militants with weapons; a convoy of 10 tanks was spotted, crossing the Russian-Ukrainian border at the Izvaryne checkpoint on the way to Luhansk. Moreover, there is an increasing flow of personnel, military equipment, ammunition and fuel that arrives to Debaltseve by rail. Meanwhile, militants dismantled the industrial equipment from the Luhansk mill roll factory and Zuyiv electromechanical plant and sent it to Russia.

Ukraine’s Security Service detained a Russian citizen who was part of the “Ministry of State Security of DPR” militant group. She is suspect in organizing a series of explosions in the city, including the recent explosion of the monument column that has occurred on April 7.

The humanitarian aid was delivered to the government-held territories in eastern Ukraine. Two trucks with 5 tons of hygiene products bought by the International Committee of the Red Cross have crossed2 the Novoaydar checkpoint, heading to Stanytsia Luhanska to distribute the goods among the local population.