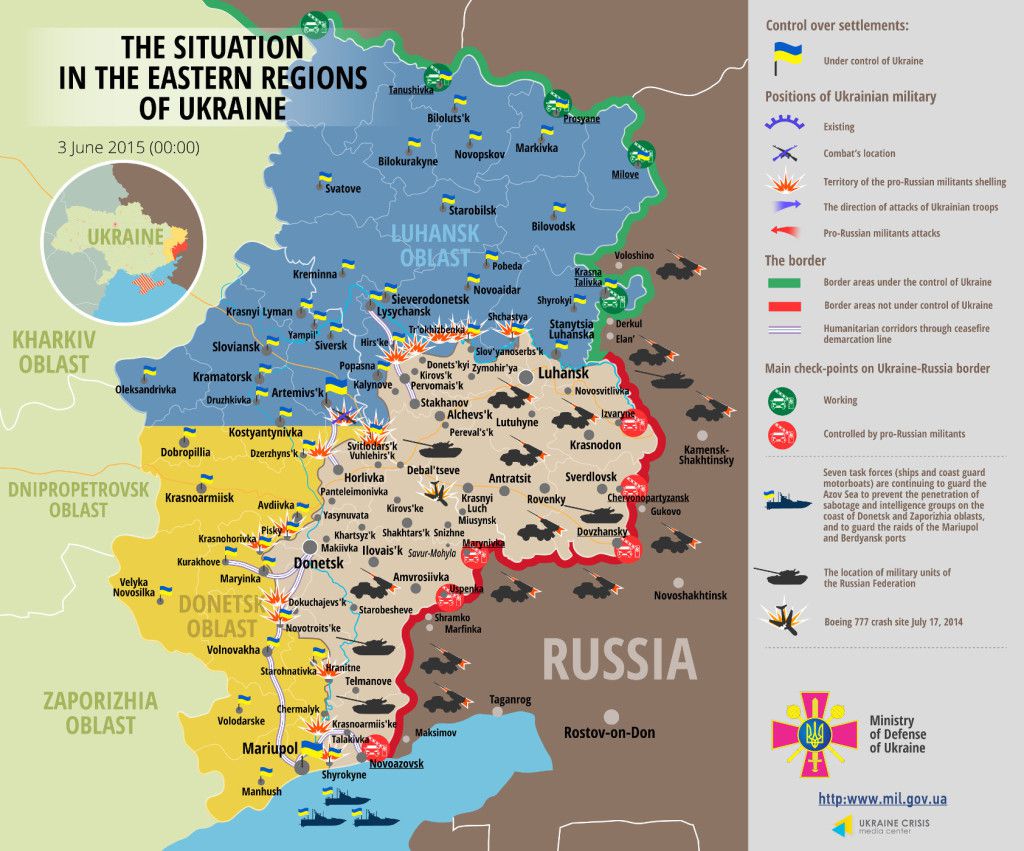 In the Mariupol sector, Russian proxies shelled Shyrokyne and Chernenko from 82-mm and 120-mm mortars. Meanwhile, militants focused their artillery shelling on the areas around Svitlodarsk, Donetsk sector. Skirmishes took place in the outskirts of Kirove, Pisky and areas south of Donetsk.

In Luhansk sector, Ukrainian troops did not observe armed incidents involving heavy weapons by militant groups. The enemy has conducted a series of armed provocations in the area of Zolote, Shchastya and near the Bakhmutska road.

Three Ukrainian servicemen got wounded in action in the last 24 hours.

“Hnutove” and “Bugas” checkpoints have been temporarily closed due to the militants’ shelling. This was done to ensure the safety of civilians who cross the checkpoint. These two checkpoints has been reopened already.

Ukraine’s Security Service detained three persons suspect in committing nine terrorist acts in the Kharkiv region, including blasting the railway tracks, shooting at military enlistment offices and of the volunteer organization office from a grenade launcher. Pro-Russian subversives have been recruited by the Russian intelligence and who underwent training courses on the Special Forces military field based in Krasnodar. Ukrainian operatives confiscated a sniper SVD rifle, MRO-A reactive flamethrower, Kalashnikov assault rifles, pistols, over 1 kg of TNT and over 2,000 rounds. A Vintorez sniper rifle has been found in the militants’ arsenal too, which is in service of the Russian elite military units. Another “Vintorez” was seized from Russian servicemen of the GRU’s Special Forces 3rd Brigade of the Russia’s Armed Forces who were detained on May 16 near Shchastya.

Three trucks with 20 tonnes of food and hygiene items collected by the International Committee of the Red Cross moved through the Novoaidar checkpoint, which is to be distributed among civilians in the Luhansk region..