Kyiv, March 20, 2015. Russia-backed militant groups have blatantly violated the Minsk agreements by attacking Ukrainian servicemen from the “Grad” multiple rocket launcher for the first time since the last month. They used tanks to fire at the Ukrainian positions four times near Sokilnyky village in the Luhansk region. The militants further violated ceasefire five times after midnight. Meanwhile, Russia keeps supplying weapons and ammunition to its proxies through the uncontrolled parts of the Russian-Ukrainian border. 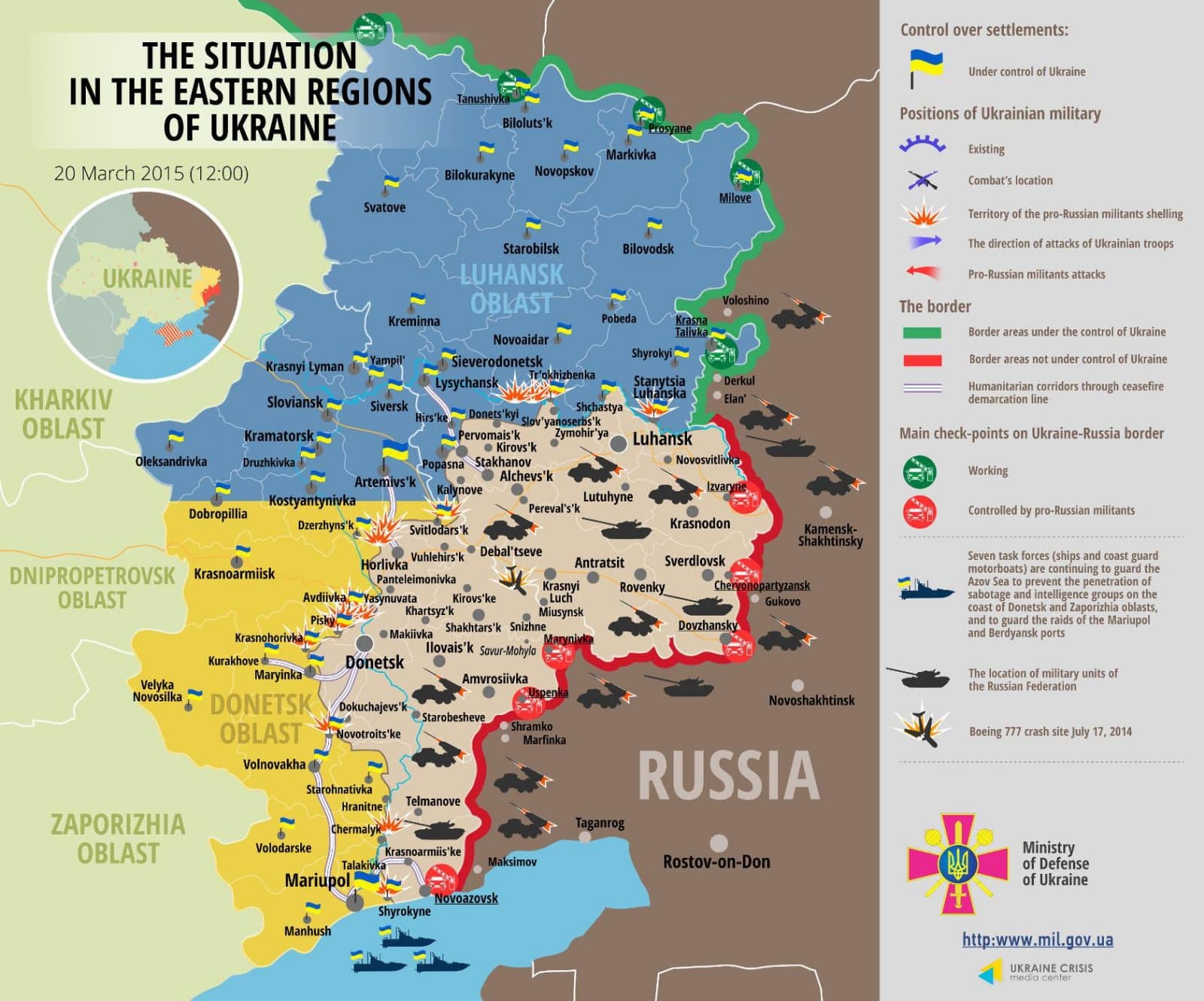 Ukrainian Armed Forces did not suffer any lethal casualties; 3 servicemen got wounded in the last 24 hours.

The Ukrainian Armed Forces have been meritoriously complying with the terms of the Minsk accords with respect to withdrawal of heavy weapons. This was confirmed by the international observers from the OSCE Special Monitoring Mission after visiting the sites where the Ukrainian heavy weapons have been relocated. On the other hand, the militants of the so-called “Donetsk People’s Republic” and “Luhansk People’s Republic” did not provide any information about the location of their heavy weapons.

Ukrainian Armed Forces engaged in a military action with the militants in the area of Stanytsia Luhanska. The Ukrainian positions came under fire from mortars and anti-aircraft weapons. According to Gennadiy Moskal, governor of the Luhansk region, the bridge over Siversky Donets River has been completely destroyed as a result of fighting.

Ukrainian servicemen spotted 5 enemy UAVs in the vicinity of Mariupol over the last day.

The Russian military instructors train militant forces in eastern Ukraine. They are also setting up communication systems with the frontline positions. Militants received 50 B-11 recoilless rifles from Russia to reinforce their forces.

Ukrainian security services detained two militant informers in the Luhansk region. One of them, a female resident of Rubizhne, was working for the pro-Russian insurgent group “Vostok-13”, collecting information on the location of the Ukrainian forces in the Luhansk region. Another insurgent has been detained at one of the Ukrainian checkpoints in the region with an RGD-5 grenade and rounds for Makarov gun, which were confiscated from him. Moreover, Ukrainian policemen seized 3 rifles, a shotgun, 9 grenades, 29 explosive boosters, 19 signal flares and 174 rounds during the search of a private house in Khlibne village, Kharkiv region.