Kyiv, May 27, 2015. Protest moods are spreading on militant-controlled territories in eastern Ukraine. Local residents took to the streets, protesting against the aggressive policy of self-declared “authorities” in Stakhanov, Antratsyt and Dyakove, Luhansk region. 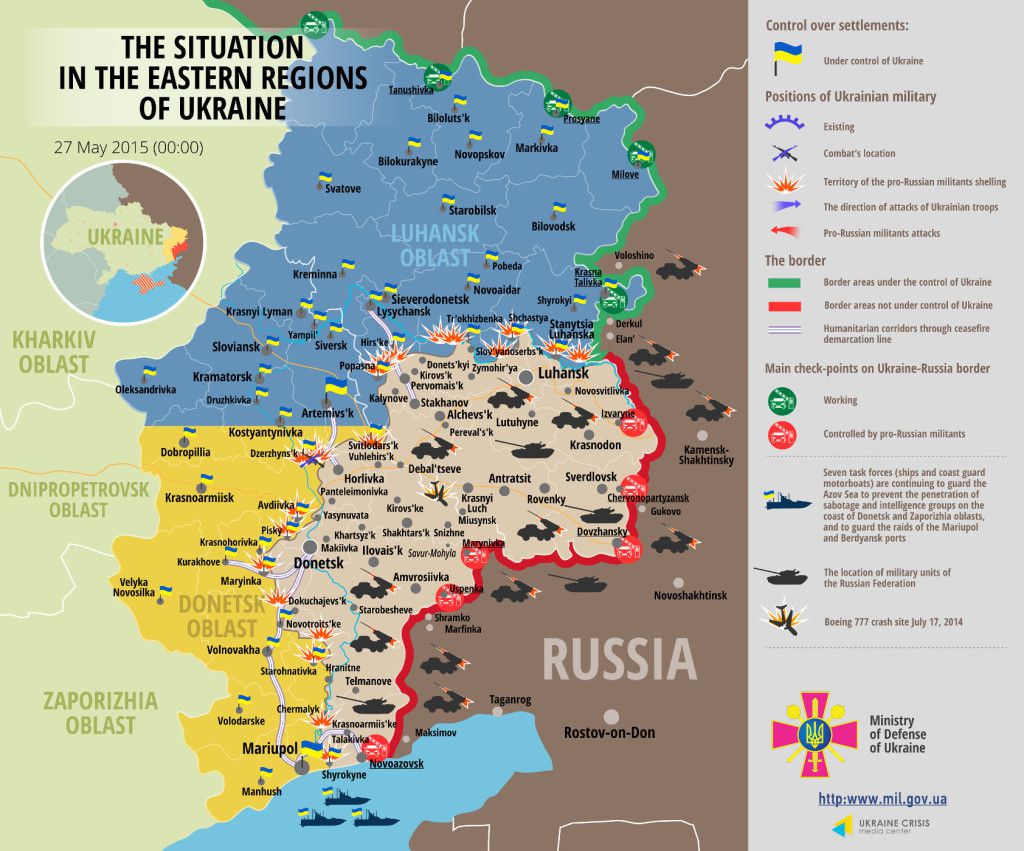 Skirmishes between the Ukrainian troops and pro-Russian militants continue in Shyrokyne. Major hotspots of the conflict focused in the Donetsk: fighting goes on in the airport area – Pisky, Avdiivka and Maryinka. Ukrainian Armed Forces came under fire in Kirove and Lozove as well. Russia-backed militants shelled the Ukrainian military positions with Grad multiple rocket launchers twice.

In the Luhansk sector, active fighting was observed along the entire frontline, stretching from Zolote to Stanytsia Luhanska. Major hotspots in the area were the militant-held Pervomaysk and towns near the Bakhmutska road.

One Ukrainian serviceman was killed in action and eight got wounded in the last 24 hours.

Ukraine’s counter-intelligence detained a resident of Shchastya who was a militant artillery fire spotter an informer for the “LPR” insurgents.

Ukrainian border guards detained three kidnappers who have abducted a resident of Mariupol. Two persons were detained and arrested in Artemivsk, they are suspected of murder of Ukrainian Armed Forces major.

Ukraine’s Security Service in cooperation with policemen of Krasnoarmiysk detained a local resident who was gathering intelligence on the location and movements of Ukrainian servicemen, passing information to the “DPR” militants.

Senior Lieutenant Dmytro Ivakh and Major Dmytro Stepancheko were posthumously awarded with the Order of Bohdan Khmelnitsky (third-class) for their heroic military service and defense of the territorial integrity of Ukraine.