National Security and Defense Council: Ceasefire regime comes into effect in the ATO zone from 10:00 today

Kyiv,9 December 2014 – Сeasefire regime in the anti-terrorist operation (ATO) zone comes into effect starting from 10:00 today as a part of the Peace Plan by the Ukrainian President. The Ukrainian troops are strictly complying with it. By 12:00 at least two cases of the agreements violation on the part of terrorists were spotted. 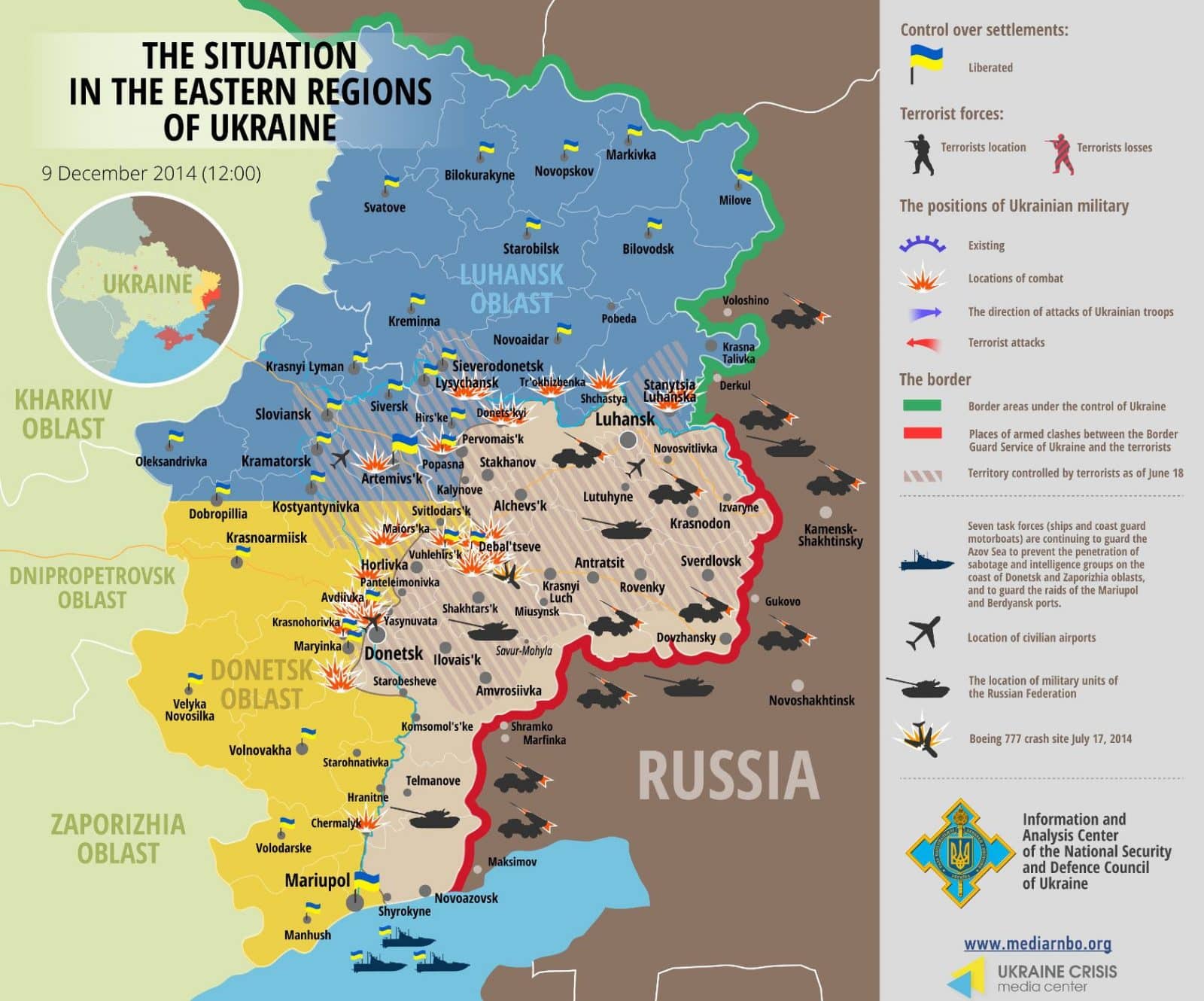 During the last 24 h situation in the ATO zone was not subject to considerable change. Militants were most active at the Donetsk and Debaltseve directions as well as in the area of Bakhmutka road. At the Donetsk direction terrorists used artillery and mortars to fire at the Ukrainian military positions at the territory of the Donetsk airport as well as near towns of Pisky, Opytne, Krasnohorivka, Taramchuk and Novomykhaylivka. On 7-8 of December in fight outside Avdiivka 5 enemy’s tanks were hit with the return fire by Ukrainian artillery, 2 of the tanks were destroyed. The enemy also suffered considerable losses in manpower.

At the Debaltseve direction positions of Ukrainian military near Olkhovatka village were twice shelled with Grad. Areas outside of villages of Artemove, Mayorske, Shumy, Vuhlehirsk and Chornukhyne were intensely shelled with artillery and mortars. Outside Horlivka Ukrainian artillery precisely shelled the enemy’s artillery positions. 2 Uragan multiple rocket launcher systems and 2 D-30 howitzers were destroyed. The shell hit a vehicle with ammunition. The enemy lost not only equipment but the trained artillery men who were conducting the shelling.

Over the last day intensity of shelling in the area of Bakhmutka road was increasing. Terrorists fired at positions of ATO forces near Tryokhizbenka, population centers Krymske, Nyzhne and Frunze with tanks, artillery and mortars. Grad MRLS were used against the Ukrainian servicemen near towns of Donetsky and Toshkivka. North of Luhansk Ukrainian positions near Shchastya, Verkhnya Vilkhova and Stanytsia Luhanska villages were shelled. Within the past day illegal armed groups fired at the ATO forces 64 times. 6 Ukrainian servicemen were killed, 7 got wounded.

Yesterday as artillery fire was launched at Horlivka 6 civilians were killed, 3 got wounded. After that a protest was conducted in Horlivka – locals were out demanding militants to leave the city immediately. Terrorists dispersed the civilians with shots from small arms. Within the last month there was a number of protests organised on the territories seized by terrorists including Amvrosiivka, Torez, Yenakieve, Horlivka as well as in Sverdlovsk of Luhansk region.