Kyiv, 19 December 2014 – Militants continue active redeployment of manpower and equipment, reinforce their firing points. Arrival of new equipment and of the enemy’s forces from Russia was noticed. 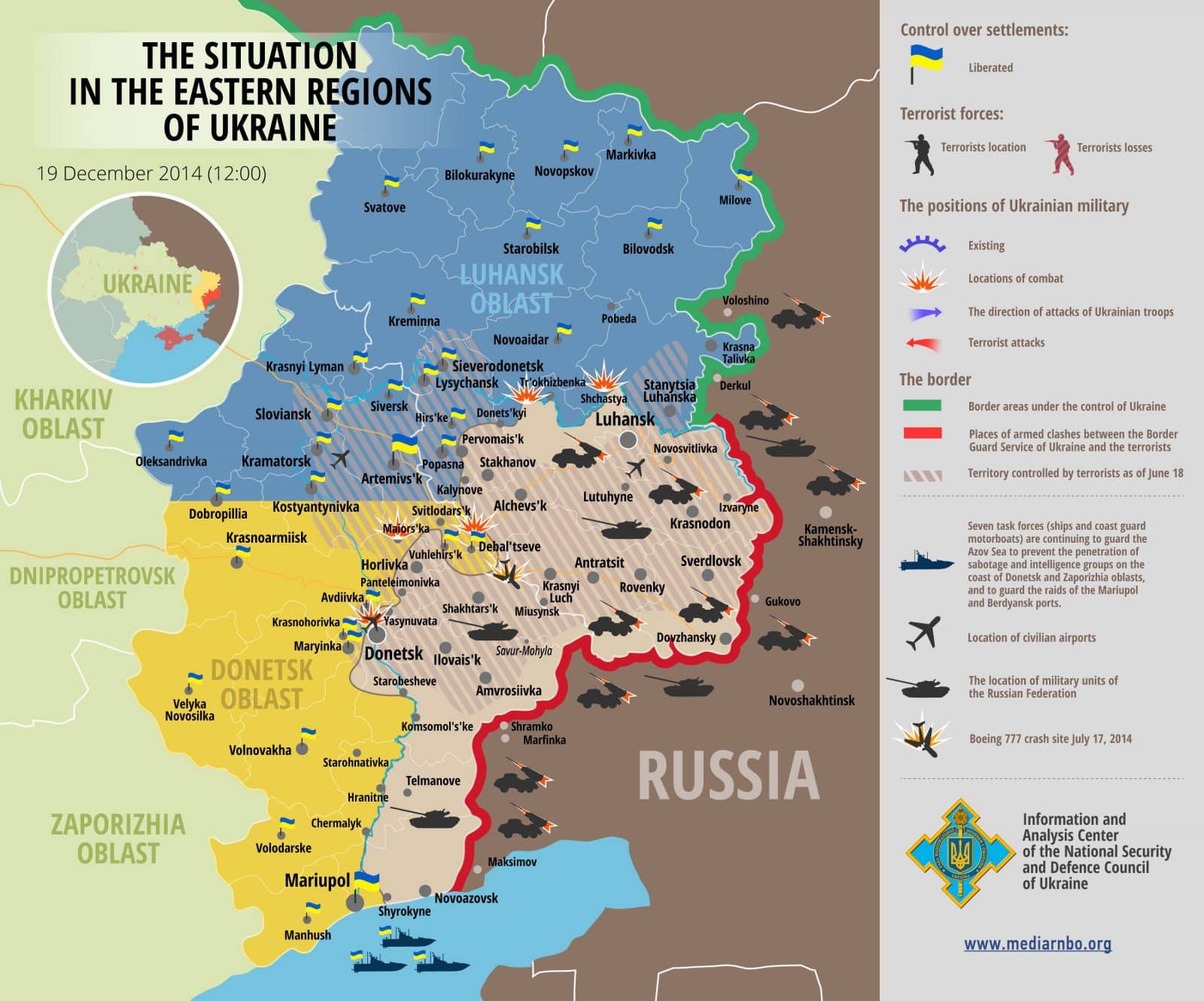 The decision to extend the OSCE monitoring mission mandate at the 2 Russian border crossing points “Gukovo” and “Donetsk” until 23 March 2015 was adopted yesterday. Due to the counter-productive position of the Russian side the mission will continue its work in the limited format, as its area of responsibility was not expanded to other Russian border crossing points including to the part of the Ukrainian-Russian border which is currently controlled by illegal armed groups.

Within the last day in the Donetsk airport area militants fired three times at the ATO forces positions from sniper weapons and small arms. Terrorists were also firing with small arms at the stronghold of the Armed Forces of Ukraine near Novohryhorivka village of Volnovakha district. In Luhansk region terrorists fired with mortars at the stronghold near Frunze settlement of Slovyanoserbsky district. From the side of Horlivka terrorists fired with small arms at “Mayorsk”checkpoint. Within the last day illegal armed groups made 9 armed provocations in total against the ATO forces. Within the last day 5 Ukrainian servicemen were killed, 7 got wounded in the ATO zone.

Yesterday at “Kurakhove” and “Vynohradne” control points border guards let in the humanitarian cargo of the International Committee of the Red Cross, “People in Need” fund and of the Eparchy of Ukraine of the Armenian Apostolic Church aimed at assisting the population of Donetsk region. The vehicles were filled with food, personal hygiene items, household supplies and construction materials. A total of 12 vehicles were let in, the overall weight of the cargo is over 130 tones.

The situation at the control points on entry to the temporary occupied Crimea is escalating. At the control points “Kalanchak”, “Chaplynka” and “Chongar” 400 trucks are standing. The main reason for such queues is the intentions of the Russian side to introduce mandatory declaration of all goods without exception heading from mainland Ukraine starting from 1 January, 2015. The State Border Guard Service of Ukraine makes everything possible to decrease waiting time. There are no queues on exit from the occupied Crimea.
19.12.2014