Ukraine expects reaction of Polish government to slogans “Death to Ukrainians!” during the March of eaglets

On the “March of eaglets of Przemysl and Lvlovski”, which was held on December 10 in the Polish city Przemysl, the participants near the building of the Ukrainian National Center chanted “Death to Ukrainians.”

UaPosition memo:
Eaglets (Polish: Orlęta) is a term of affection applied to the Polish teenagers who fought against Ukrainian army in Lviv (the capital of West Ukrainian People’s Republic) and Przemysl, during the Polish-Ukrainian War (1918–1919).

Ukraine’s Embassy in Poland condemns anti-Ukrainian slogans of the annual “Przemysl and Lviv eagles” march that was held in Polish town of Przemyśl on Dec. 10.

“We condemn any acts and calls that lead to ethnic strife and we will turn to the Polish official structures to investigate the incident,” Deschytsia said.

The ambassador added that the Ukrainian side expects the reaction in this regard not only from the Polish authorities but also from civil society organizations.

“Such provocations in the statements of one person can destroy the legacy of official and public work of Poland and Ukraine,” the Ukrainian diplomat said.

This year the eaglets march was organized not only by right-wing organizations such as Polish Youth and the National Radical Camp, an informal group of “Partiotic Przemysl”, but also the establishment of Województwo podkarpackie – Cultural Centre in Przemysl. 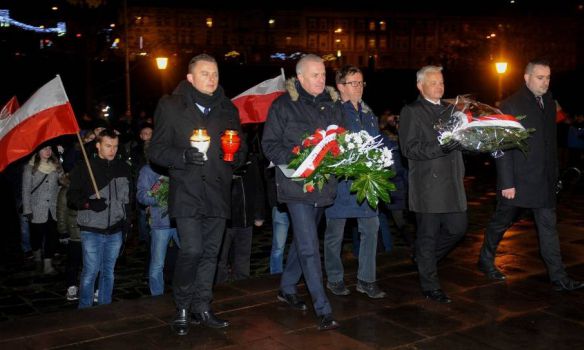 The march was held under the patronage of the Mayor of Przemysl Robert Homa.

See also: The appeal of the scientists and intellectuals concerning the resolution of the Polish Parliament about “genocide” in Western Ukraine