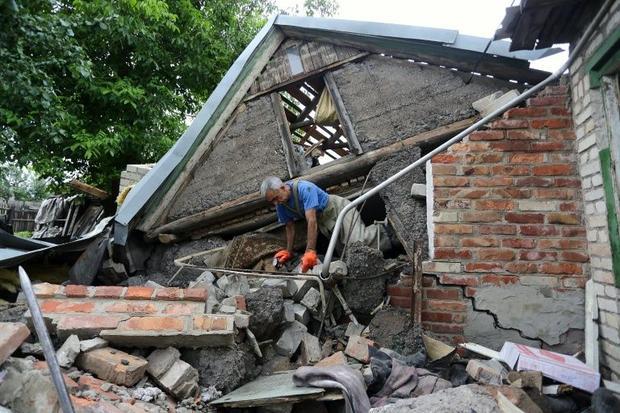 PHOTO: A rescue worker tries to locate the body of a woman trapped under the rubble of her house in the village of Golmovsky near Gorlivka in the Donetsk region after shelling between Ukrainian forces and pro-Russian separatists on July 28, 2015. Source

On July 29 2015 the ATO Press Center informs that over the past day, July 28, 2015, Russian terrorists very actively shelled at Ukrainian troops’ positions.

There were more than 80 cases of shelling of the anti-terrorist operation (ATO) forces’ positions by pro-Russian terrorists. Two times Ukrainian soldiers repulsed assaults of Russian mercenaries near villages Shchastya and Avdiivka.

“Defenders of Ukraine have repulsed two assaults of Russian mercenaries. This occurred near the cities of Shchastia, the Luhansk region, and Avdiivka, the Donetsk region. Yesterday, between 6 p.m. and midnight, terrorists shelled our positions near Krasnohorivka, Avdiivka, Pershe Travnia, Maiorsk, Mykolaivka, Marinka with cannons and mortars. At other directions, small arms were used for firing,” reports ATO Press Center.

“It was specified that Ukrainian positions near Shchastia were assaulted by Russian mercenaries under cover of 120-mm and 82-mm artillery and a tank. The mercenaries’ unit counted up to 100 people. The clash lasted for three hours. After incurring losses, the enemy retreated. After 8 p.m. near Avdiivka, a unit of 30 terrorists attempted to seize a strong point of the Ukrainian army. Having received a fitting rebuff from the ATO soldiers, the bandits escaped,” informs ATO Press Center.

Ukrainian army incurred no losses in Avdiivka and Shchastia combats.