Russian occupation forces opened fire on the positions of the Armed Forces of Ukraine in Donbas 59 times on Saturday, which included the wide use of banned weapons, according to the press center of the Anti-Terrorist Operation (ATO) headquarters.

”Twenty-six cases of violations of the truce were recorded in the Donetsk sector. The enemy used mortars, including the 120 mm caliber shells proscribed in the Minsk agreements, as well as grenade launchers of various systems, heavy machine-guns and small arms to shell strongholds in the town of Avdiyivka and the villages of Pisky [near the demolished Donetsk airport], Myronivsky, and Mayorsk. They used 82mm mortars and grenade launchers in the town of Svitlodarsk, and automatic heavy rocket launchers and anti-tank grenade launchers in Verkhniotoretske and Luhanske,” the ATO HQ said.

The heaviest fire in the afternoon was reported in the village of Zaitseve, close to the militant-controlled town of Horlivka. The enemy lobbed some 100 shells whose caliber is 120mm into the village, simultaneously using other types of weapons. Further, Zaitseve and Mayorsk were attacked by infantry fighting vehicles. The occupiers used heavy artillery against Ukrainian positions twice, having fired thirty-five 122mm projectiles while shelling the villages of Pisky and Luhanske. 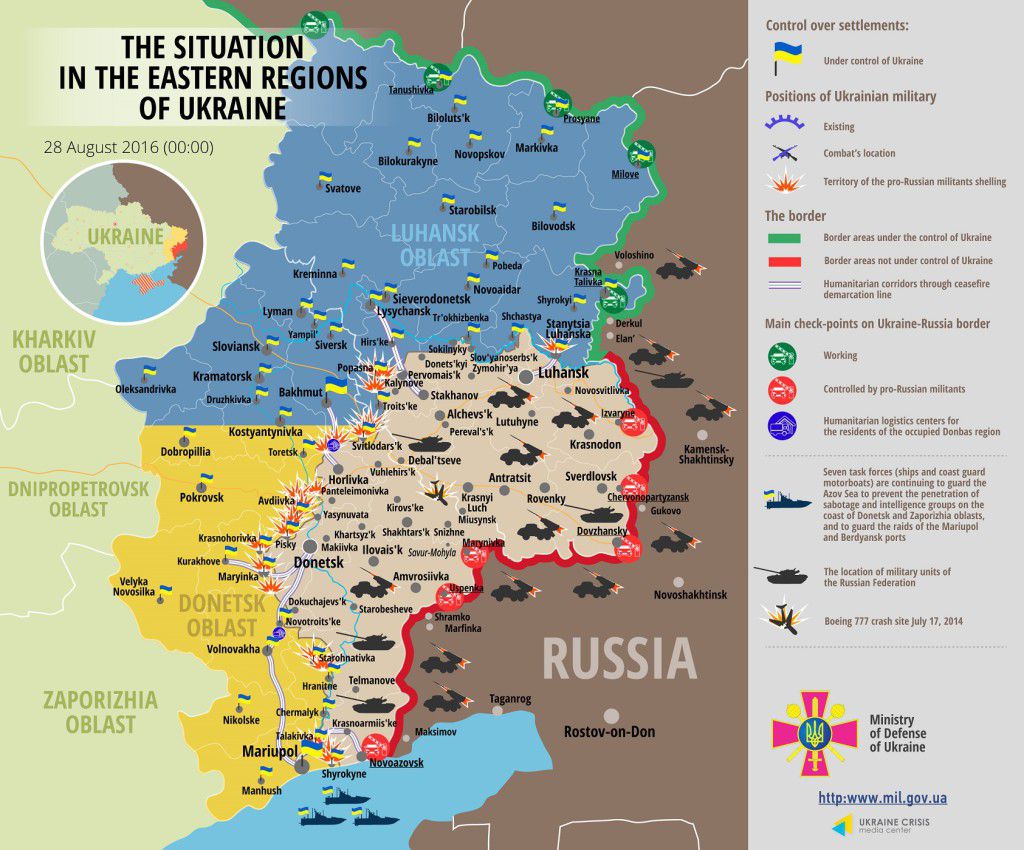 The Mariupol sector also saw 24 violations of the ceasefire. Ukrainian defenders of the town of Krasnohorivka, and the villages of Shyrokyne and Talakivka, came under heavy fire from 120mm mortars. Grenade launchers and heavy machine-guns were also used.

ATO positions in the village of Novohryhorivka were attacked by large-caliber machine-guns. Further, the villages of Vodiane and Taramchuk came under 82mm mortar fire. Also, the enemy fired small arms on the village of Starohnativka. The town of Maryinka and the village of Talakivka were attacked by enemy infantry fighting vehicles. Maryinka also came under sniper fire. Close to midnight, the enemy fired heavy artillery while shelling Shyrokyne, which is 22 km from the Ukrainian-controlled strategic port city of Mariupol, having fired about forty 122mm projectiles.

Meanwhile, in Luhansk region, the enemy opened mortar, grenade and machine-gun fire on the strongholds of the Ukrainian army in the villages of Novo-Oleksandrivka, Novozvanivka and Stanytsia Luhanska, which was also attacked by infantry fighting vehicles. ATO troops stationed near the town of Popasna and Stanytsia Luhanska also came under sniper fire.

”From about eleven o`clock in the morning to half past four in the evening, there was a relative lull along the contact line. Enemy drones were spotted twice in the past day,” the ATO HQ reported.