The situation in the zone of the Anti-Terrorist Operation has become more intense as Russian-terrorist forces have attacked 88 times the positions of the Armed Forces of Ukraine in the past day, according to the ATO Headquarters.

The shelling was most intensive on the Mariupol line, the ATO HA wrote on Facebook. 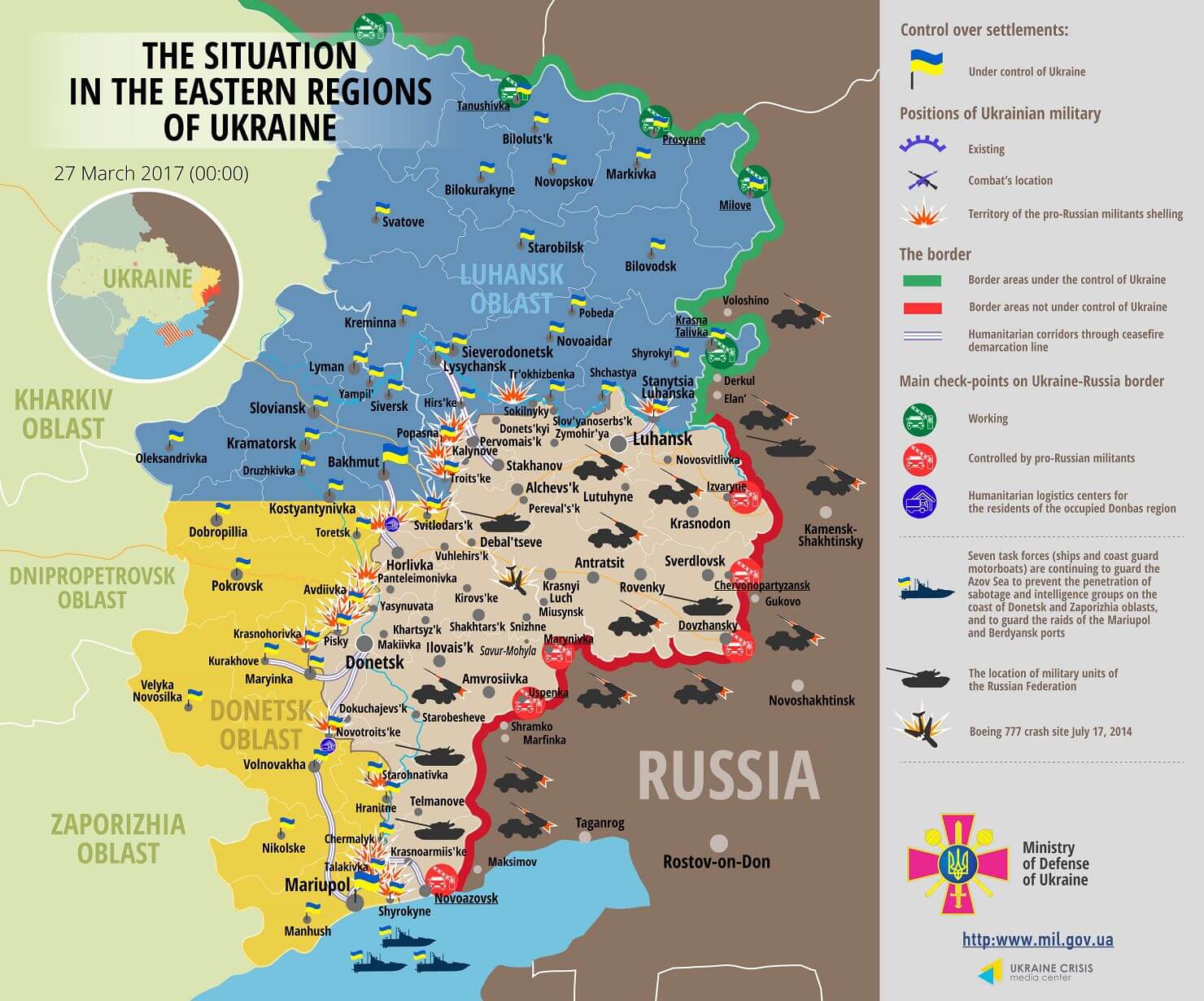 The epicenters of fire confrontation were in Shyrokine and Vodiane as these settlements` defenders came under enemy fire from 122mm artillery systems, 120mm mortars, grenade launchers of various types, and large-caliber machine guns. Marines stationed in Shyrokine were shelled from an enemy tank and fired at by snipers.

”The enemy fired 120 mortars on the defenders of Hnutove, Pavlopil, Lebedinske, and Talakivka. In the area of Novotroitske, the Russian-occupation forces fired from infantry fighting vehicles. Near Krasnohorivka and Maryinka, the enemy actively used grenade launchers and large-caliber machine guns,” the HQ reported.

The situation was also intense in the Donetsk direction, where the enemy used a wide range of heavy weapons against Ukrainian soldiers.

”Russian-occupation forces hit the defenders of Troitske from 152mm artillery systems, 120mm and 82mm mortars. 120mm mortars were also used by the enemy near Avdiyivka and Luhanske. 82mm mortar rounds were fired at the defenders of Kamenka, Verkhnetoretske and Avdiyivka. A tank fired at Ukrainian soldiers near Kamenka, and an IFV – at Ukrainian strong points near Verkhnetoretske and Pesky. Enemy snipers were active near Troitske,” the report said.

”In order to suppress enemy fire, our units opened fire in response. Over the past day, three Ukrainian soldiers were killed, eight were wounded,” the Headquarters said.

On March 26, Russian-occupation forces shelled 81 times the positions of Ukrainian troops in the zone of the Anti-Terrorist Operation, leaving 6 Ukrainian troops wounded and another 2 injured, the press center of the ATO Headquarters reported Sunday morning. 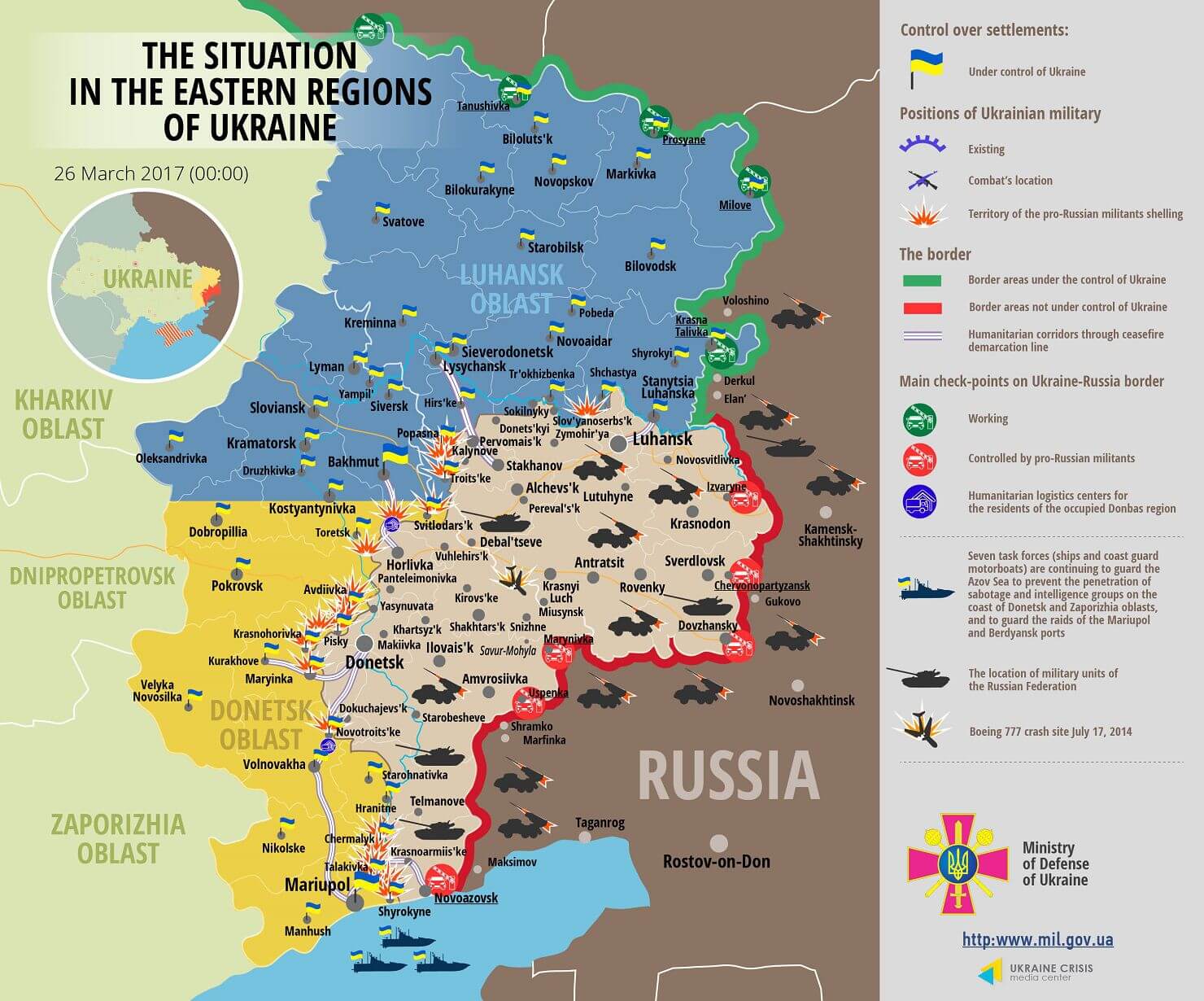 The shelling remained most intense in the Mariupol direction, where the enemy used weapons banned by Minsk Agreements. Ukrainian positions near Vodiane and Chermalyk came under enemy fire from 122mm artillery, machine guns, and grenade launchers of various types. Defenders of Shyrokine and Pavlopil were shelled from 120mm mortars. Russian-ocupation forces also used 82mm mortars firing at the defenders of Shyrokine, Pavlopil, Vodiane, Talakivka, and Krasnohorivka, fire was fired from mortars of 82 mm caliber.

On the Donetsk line, the enemy was most active under Avdiyivka, Novhorodske, Opytne, and Troitske. In the past day, the enemy shelled positions of Ukrainian troops from large-caliber machine guns, grenade launchers, and 120mm and 82mm mortars. Near the settlements of Zaitseve and Peski, the enemy fired from small arms and 82mm mortars. Large-caliber machine guns and grenade launchers of various types were fired at Ukrainian strongpoints near Nevelske and Kamenka.

In the Luhansk region, the situation remained tense near Novozvanivka, where the enemy used grenade launchers, machine guns and 82mm mortars.

The Ukrainian forces returned fire to reduce the intensity of the enemy shelling.