Ukraine`s state-owned enterprise Antonov, the only Ukrainian designer and manufacturer of cargo and passenger planes, on December 20 presented the first prototype of a new An-132 transport aircraft 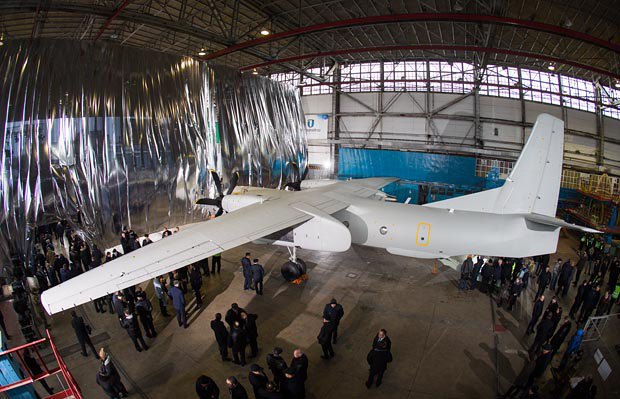 The ceremony was also attended by top management of Ukraine`s state-owned defense giant Ukroboronprom and Antonov design bureau, which is part of the Concern.

The representatives of the Kingdom of Saudi Arabia, which are customers and partners in the project, were also present.

The production of the first sample of An-132 was launched in September 2015. At the same time, Antonov has signed a number of agreements with Saudi Arabia on the deliveries of these aircraft from 2017, as well as on the joint design and production of aircraft plant in its territory where mass production of An-132 is planned.

Ukrainian company management has assessed the needs of the world market in such aircraft to about 900 units over the next 20 years.

The aircraft was ”propelled by Pratt & Whitney Canada PW150 engines, with six-bladed Dowty Propellers Company R408 propellers; the fully digital avionics system was delivered by Honeywell, while the life support system was provided by the Liebherr company.