Russian troops fired at Ukrainian army positions and civil objects in Donbas in all sectors 67 times in the past 24 hours. 2 Ukrainian soldiers reported as killed in action (KIA) and 14 wounded in action (WIA), 2 civilians were killed and 6 injured, according to the press service of the Anti-Terrorist Operation (ATO) Headquarters.

Russian troops continued to shell the town of Avdiyivka with the use of heavy weapons, i.e. Grad multiple rocket launchers, 152mm and 122mm artillery systems and tanks. Shells have directly hit points distributing humanitarian aid to locals. Russian troops have fired on a stadium in the heart of the town, where there is a tent site with heating stations. They have fired on school No. 2, which was used as a humanitarian aid collection point. A wounded woman was found near the No. 2 school building, which came under fire. She was rushed to hospital but died of wounds. This is the second dead person in Avdiyivka in the past hour. A foreign press photographer Christopher Nunn from the United Kingdom had a face injury, according to Pavlo Zhebrivskyi, the head of the Donetsk regional military-civil administration of Ukraine. 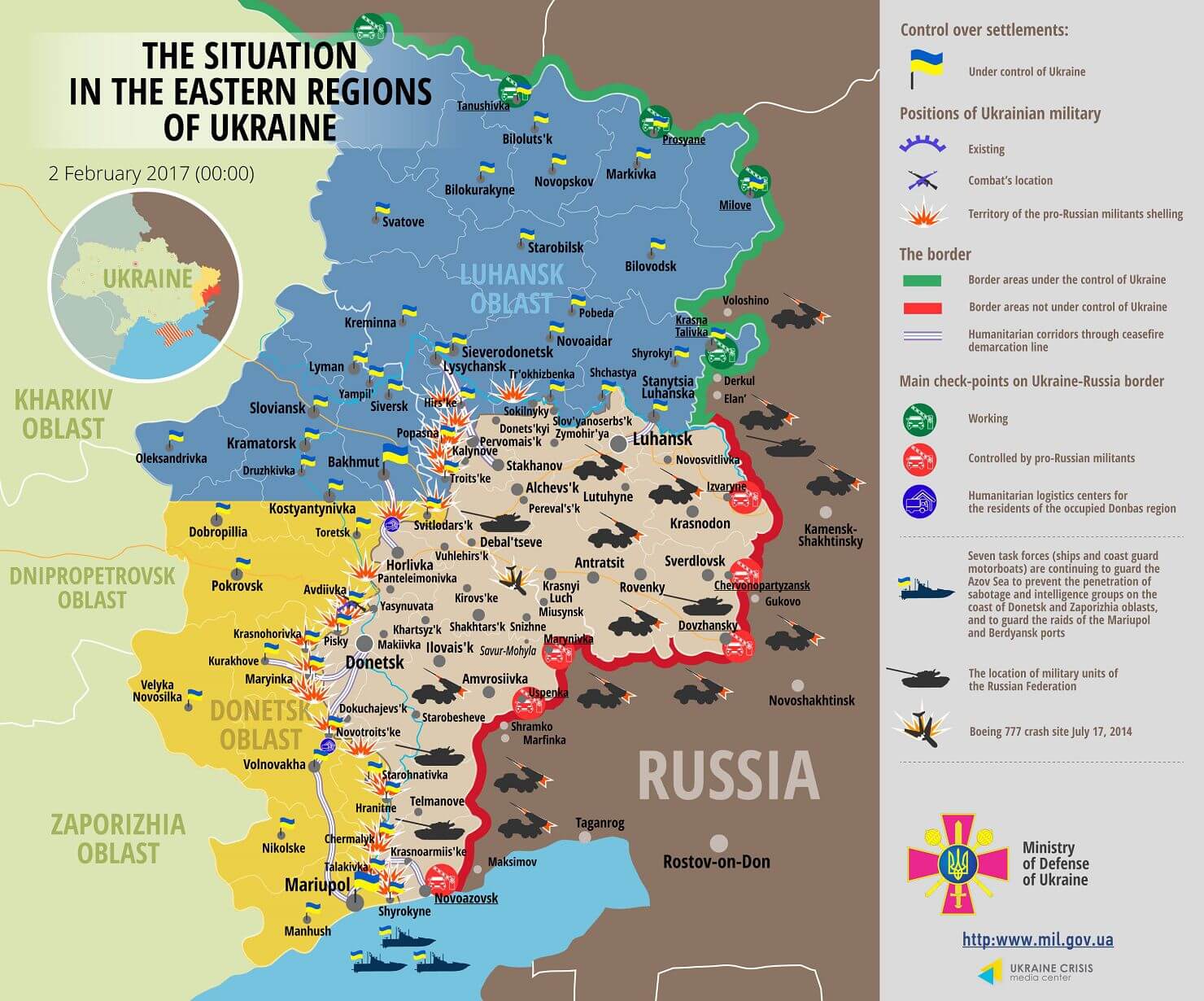 Russian troops made a direct hit on a house at 19 Molodizhna Street in the town of Avdiivka. A gas pipeline and the heat transport system have been damaged. One shell has hit a vehicle of Ukraine’s State Emergency Situations Service, among the dead was an emergencies service worker, reports Hromadske TV.

In the Donetsk sector Russian troops near Avdiivka continue shelling day and night non-stop. Russian troops are intensively using heavy armor near Popasna, Avdiivka, on Butivka coal mine-Pisky position, in Krasnohorivka, in the vicinity of Dokuchaevsk and near the Azov Sea. Russian troops intensified their attacks at Butovka coal mine flak position. Tank shooting attack from Spartak direction lasted many hours there yesterday. Russian troops opened fire from mortars, cannons and Grad MRLS from the settlement itself. The situation was especially restless at the Svitlodarsk bulge, in Zaitseve, Verkhniotoretske and Pisky yesterday. Russian troops are also using heavy armor in this area, trying to split Ukrainian forces and distract commanders’ attention from the point of main effort.

In the Mariupol sector, the Russian troops fired Grads and 122mm artillery systems on the village of Vodiane. A series of hostile provocations was instigated along the entire frontline, involving use of small weapons, cannons and mortar launchers. Russian troops opened fire from a tank, 122mm artillery systems, 120mm and 82mm mortars, rocket-propelled grenades and small arms on the town of Krasnohorivka. The enemy also used 122mm artillery systems and mortars in the villages of Hranitne, Bohdanivka and Shyrokyne. The town of Maryinka and the village of Chermalyk were attacked with the use of mortars of various calibers. The Russian troops fired rocket-propelled grenades, heavy machine guns and small arms on the villages of Shyrokyne, Novotroyitske, Novomykhailivka and and used armored personnel carrier in Novohryhorivka.

In the Luhansk sector, the Russian troops fired 152mm and 122mm artillery systems on the villages of Krymske and Vrubivka, mortars on the town of Popasna, and the villages of Katerynivka, Novozvanivka and Troyitske, and small arms on Krymske. Russian troops’ 152-mm projectile damaged two power transmission lines in Vrubivka, Popasna district. School premises on the territory of Triokhizbenka village council were damaged and a roof of a building ruined as a result of Russian troops’ attacks.

See also: Kremlin states the escalation in Donbas is the additional opportunity to improve relations with the U.S.