Russian militants were mortaring Ukrainian positions in Avdiivka for two hours from two different directions. 37 mines were launched. Russian militants attacked Ukrainian army positions in Donbas 41 times in the past 24 hours with one Ukrainian soldier reported as wounded in action, according to the press service of the Anti-Terrorist Operation (ATO) Headquarters. 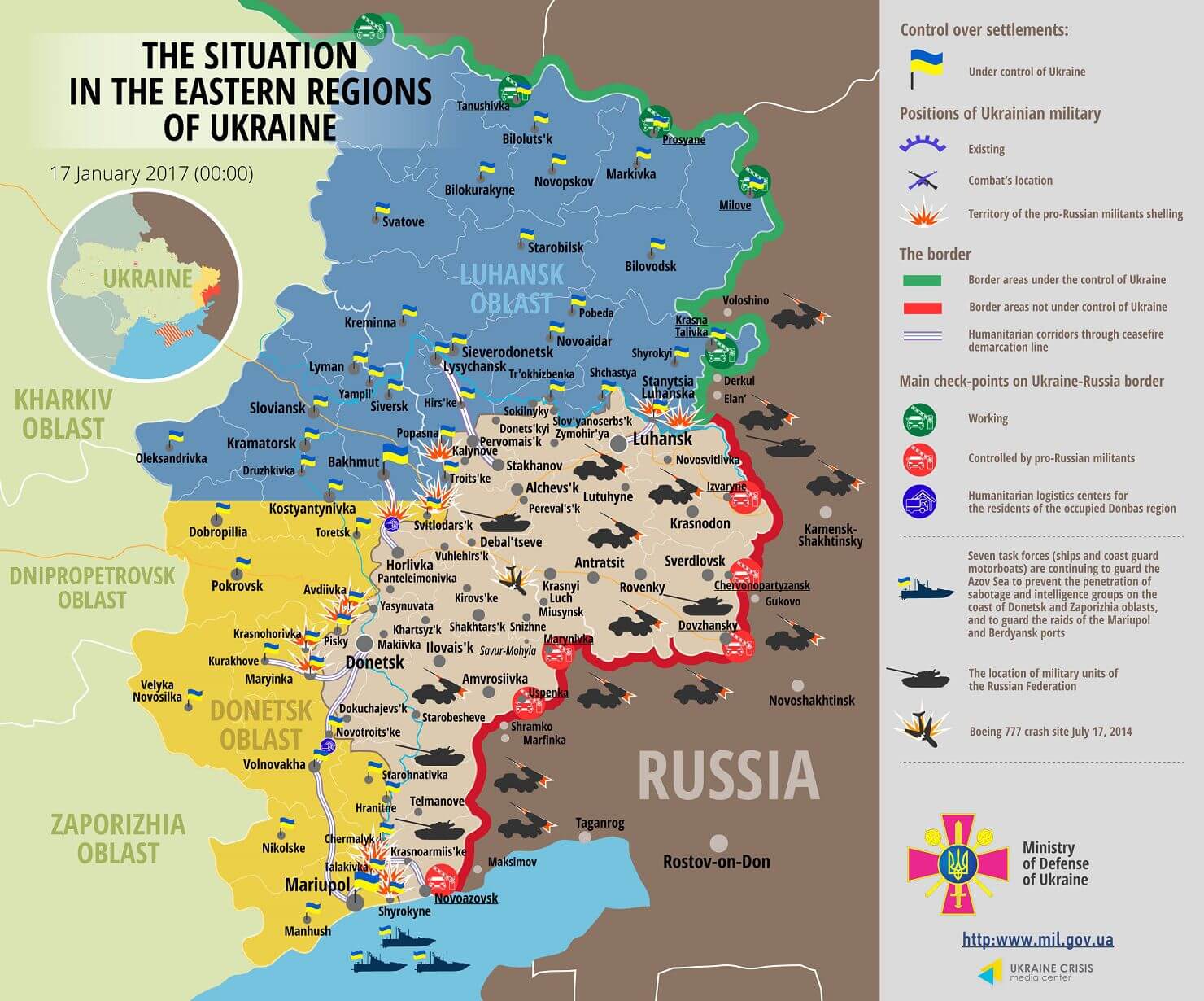 Russian militants continued shelling of the Ukrainian positions in all directions. In the Mariupol sector, the militants fired 82mm mortars on the village of Pavlopil, as well as grenade launchers and small arms on the towns of Maryinka and Krasnohorivka, and the villages of Pavlopil, Hnutove, Vodiane and Shyrokyne.

Russian militants attacked Ukrainian army positions in Donbas 60 times on January 16, 2017, with one Ukrainian soldier reported as wounded in action , according to the press service of the Anti-Terrorist Operation (ATO) Headquarters. 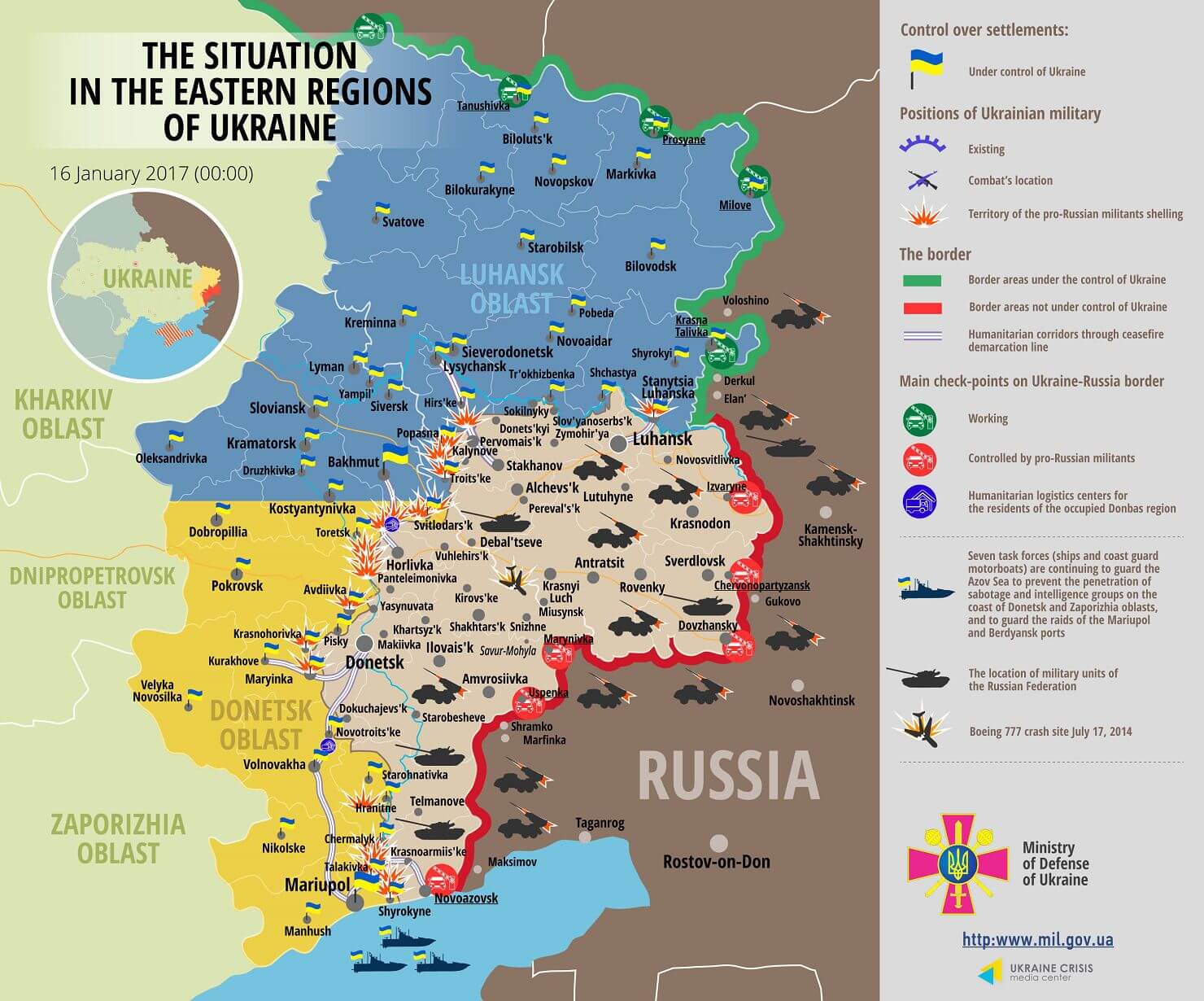 The number of Russian militants’ attacks in the Mariupol sector exceeds the other two sectors together. Russian militants are violating the armistice along the entire frontline area. Adversary traditionally used mortar launchers and cannons in Mariinka district and near the Azov Sea. Krasnohorivka, Mariinka, Pavlopil. Hnutove and Shyrokyne remain the traditional flashpoints. Ukrainian troops intensively responded with fire. Russian militants made 37 attacks in this sector yesterday, and 6 of them involved use of heavy arms.

The situation in the Luhansk sector was the most restless in Troitske yesterday. Insurgents were firing from grenade launchers and 120 mm mortar launchers. Moreover, they made a mortar attack in Novooleskandrivka. Russian militants used light weapons in Stanytsia Luhanska and Zolote. In total over 20 shells were launched at our positions in this sector.

A number of powerful mortar attacks at Ukrainian positions from different directions took place in Novhorodske in the Donetsk sector. In total, Russian militants launched 54 shells at our positions in Novhorodske. Moreover, the situation was restless in Avdiivka: Russian militants were shooting from mortars and artillery from the direction of Yasynuvata during six hours and used mortar launchers in Novoluhanske. In total, Russian militants carried out 14 attacks in the Donetsk sector yesterday, using heavy weapons six times.

Ukrainian Armed Forces incurred no losses in combat yesterday, and one serviceman was wounded. At the same time, 7 militants died last week and 14 were wounded.

The Security Service of Ukraine liquidated a militants’ agent network in Krasnohorivka. Three criminals were collecting information on composition, weapons and movement of Ukrainian troops in the combat zone in East Ukraine. A Russian citizen Yaroslav Yefendiev (nom de guerre Effendi) has been found to be the curator of the agent net. He is an assistant chief for intelligence at so-called “5th brigade” of Russian occupational troops.