Journalism, as part of the information war 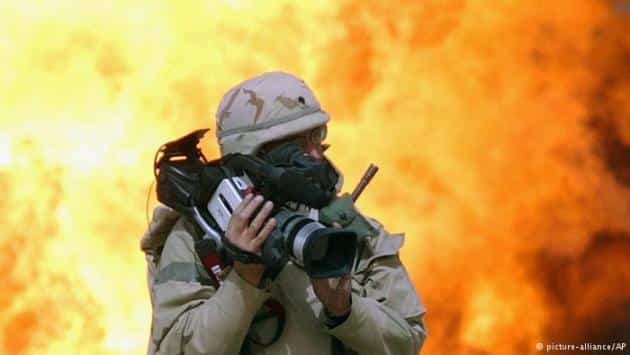 Words can hurt, kill or cure.

In the war that is going on now in Ukraine information battles take the leading place. Shots and explosions, reports and comments have become an instruments of hybrid war in the Donbas. The reporter at war – is the fighter too, word is his main weapon.

I must say, that not only Ukrainian army, but also Ukrainian media were unprepared for the war. Therefore, war reporters also had to acquire experience from scratch.

Understanding the specifics of war does not come immediately to peaceful journalist. We already wrote that the desire of some journalists to submit exclusive report regardless of the situation often has the unwanted effect – creating a real threat to our military units.

Hippocrates’ “do no harm” principle is still very relevant, because journalist at war is a source of information that can be used by military intelligence.  It is well-known that analysis of open sources nowadays allows the specialist to get up to 90% of the necessary information.

Intelligence agencies study literally everything that is available in the public domain. In that regard landmarks, weapons, details of ammunition and security, even tone of the voice in the dialogue in the video clip can be very informative. Some “frank” reports from the area of ATO can easily provide enemy with information about the mood of soldiers, fortifications or vulnerable areas of our defense.

Here are some 2014 examples, which are not hard to find on YouTube (names of TV channels and journalists, as well as people’s faces are hidden): 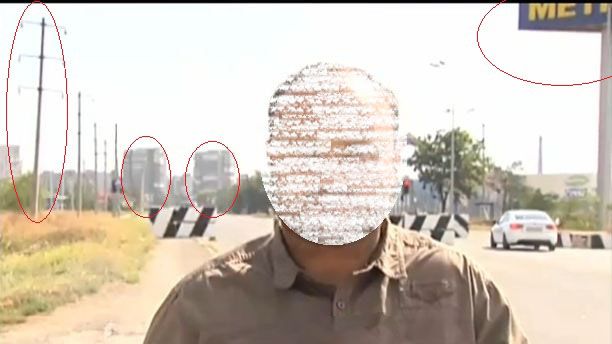 Journalist from well-known TV channel is giving quite a detailed account of the defense system of the city of Mariupol.

Fortification barriers and landmarks are clearly visible in the picture: there is the power line to the left, billboard of the supermarkets “Metro” – to the right, 250 meters behind the reporter there is a residential area.

This information allows one to determine the exact coordinates of the checkpoint, and to use this data for the purposes of sabotage. 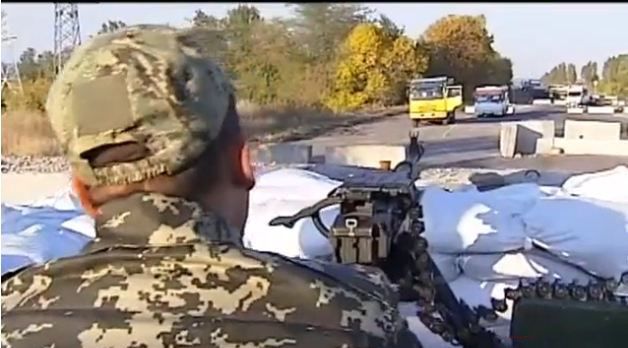 Angle, used by a cameraman, shows the shooting sector and the view from the checkpoint shelter. Using this data, it is easy to determine places, hidden from view. It may be used by the enemy for planning attacks on a checkpoint. 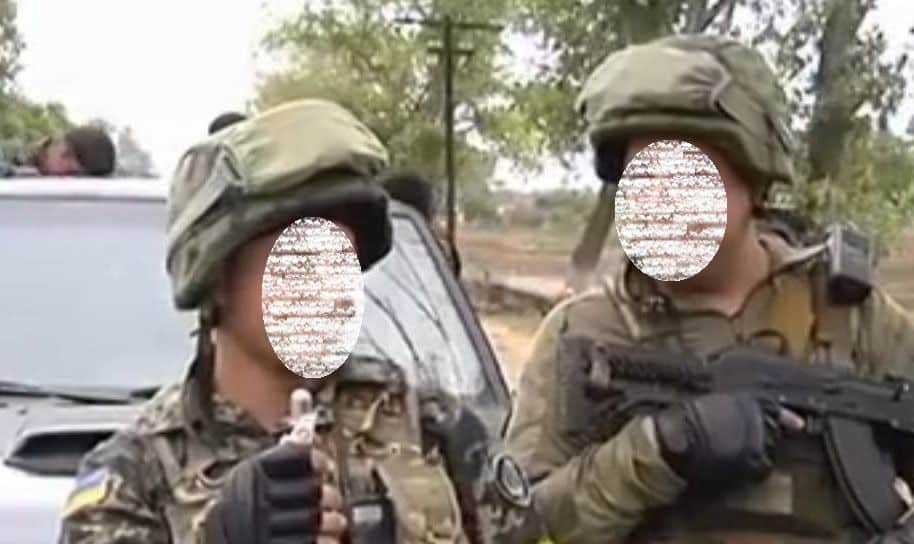 Here is another story with a striking soldiers’ revelation.

– Yesterday fifty tanks came from Russia here, and we have only seven RPGs. That’s it. That’s all we have against the tanks – said the first soldier.

– And what else have you got besides RPG? – asks the journalists.

Such confessions of fighters are considered a real treasure for enemy spies, allowing them to determine combat potentials of the units and to plan activities during attacks.

The journalist should not submit the material to the news section. It would be better to use such information in the final news release, say in two weeks.

Report starts with the words: “This is – the easternmost defensive checkpoint on the outskirts of Mariupol. It is about 10 km west rom the village Shirokino where fighting takes place.”

This story again has the data about the arms that are “insufficient when dealing with the tanks.”

From the landmarks in the background, distances and directions information and the arms data altogether the enemy intelligence may get a good idea about defensive capabilities of the unit. 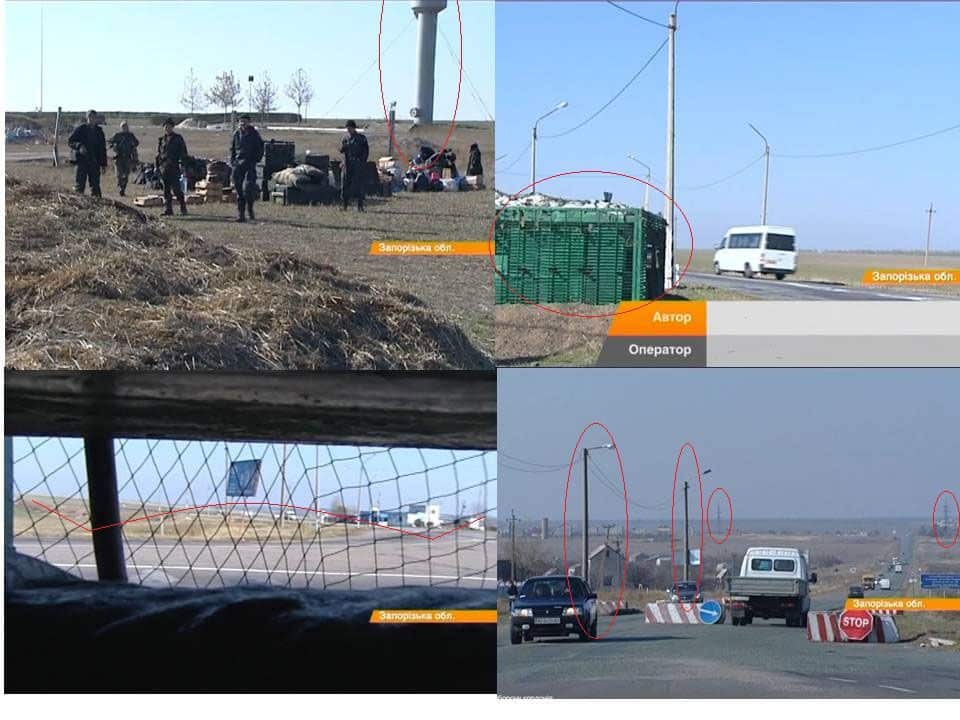 This story begins with the words:

“Checkpoint in Lunacharsky – is one of the seven existing checkpoints of Berdyansk resort. Here passes the route Kherson-Mariupol-Rostov. This is a strategic road to Crimea. ”

In this case both – Berdyansk general defense system and a separate mission of the checkpoint – are partially disclosed. Moreover, the video serves as an accurate source of intelligence information for the enemy. It shows the markers, shelters equipment, road obstacles, observation views and more.

A story from the checkpoint in the village Mar’jinka shows a panoramic view of fortifications. In addition, the report indicates approximate distance to some of the landmarks. Such information may also be used by intelligence and artillery units of the enemy. 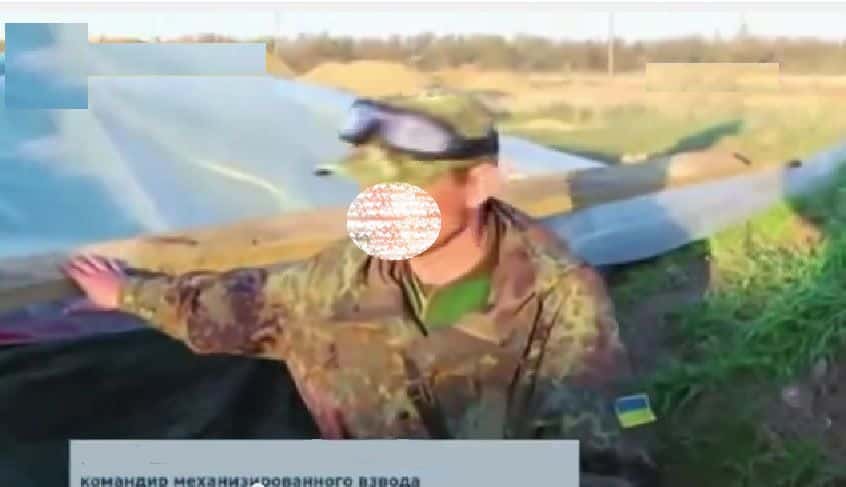 This story was about conditions of life in the battleground for one of the units of fighters. The soldiers expressed dissatisfaction with logistical support in combat.

– The men say that to live in such conditions is not only uncomfortable but also dangerous, – said the journalist of one of the TV channels and gave the microphone to the platoon commander.

– It is a tent, not a bunker. It definitely cannot survive in the battle – platoon commander confesses.

And again, video makes it very easy to identify location of the place.

Such cases, as we see, are not unique. For many journalists in the ATO zone it was not clear that in their materials they cannot disclose the number of troops, standard weapons, positions and coordinates of deployed military units.

War has the rules. Many soldiers do not want to appear in the photo or video. They are also afraid that the material will reveal their position.

Journalists who visited the combat conditions, transfer their experience in workshops. Here are some tips:

1. Verification of information is a delicate matter. Я считаю, что о событиях, свидетелем которых ты стал, нужно сообщать руководству. I believe that you need to inform the management about events you witnessed.

2. The report cannot contain names of places where our military forces are located, it cannot have panoramic shots pointing to location – the enemy is constantly monitoring all the information that gets available. It would be better to give your footage to the military officer for preview: they do not usually remove a lot.

2. The military report should not harm its heroes.  Filming has to be done so that the enemy could not determine the position of the military from the video.

3. If a reporter wants to talk about the life of soldiers – he should not add any information about the tasks and arms of this subdivision.

1. Ask everyone if his picture can be taken. Если люди с оккупированных территорий, тогда применяйте размытое лицо. When taking pictures of people from the occupied territories, use the blurred face.

2. Taking pictures of military equipment on the positions is prohibited. Comments that the position of such a team on a certain date had such a technique are unacceptable.

3. It is strictly forbidden to shoot at checkpoints. A person who does it is a potential spy.

4. If the tragedy occurred, someone was killed or injured, there is no need to ask: “And what do you feel …?”

6. Senior officers possess valid information. Всю информацию надо сверять с ними. It is necessary to have your work checked by them. This way your report would not look like soldier’s yearbook.

7. Not to interfere! This is the greatest asset of the war reporter.

The war is going on in Ukraine. The information frontline is as important as is the military frontline in the Donbas. And the war reporter is a small link in the chain of information victories.

During the war journalism is needed the same way machine guns are needed. Journalism is obliged to work for victory in this war.

However, we must remember that neglect of simple rules covering military actions makes the journalist an informant for the enemy’s intelligence.