There is a lot of fake information about Ukraine and Ukrainian events, especially in Russian Mass Media. All these false photos, videos, articles, interviews are made on order of Russian Government and are the part of information war against Ukraine.

These are the 10 the most defamation facts of Russian propaganda with proofed links and video:

1. The website KM.ru wrote the article with fake news in which claimed that UN had accused Ukrainian government of crimes and hatemongering (if the original webpage is deleted you can see it in the web archive).

In the real UN report in English was written that armed people physically occupied the majority of key public and administrative buildings in cities of Luhansk and Donetsk regions; and that they later declared virtual “independence”

There was also written in the fake article that “from April to June, both sides of the conflict have kidnapped 387 people, including 39 journalists.” But in fact, the UN was writing about kidnappings carried out not by both sides, but only by armed groups.

Actually the UN mission did not claim that Ukrainian security services kidnapped Russian activists and the subject paragraph in the report was preceded by discussion of kidnappings performed by separatists.

2. There is the video of Iraq in 2004 that is presented as that of real events in Sloviansk. In this video there is the false information that Ukrainian army bombarding Semenivka village (near the city of Sloviansk, Donetsk region), using incendiary shells.

But in fact this video was filmed in November of 2004, in Iraq and contained footage of American bombardment during the Second Battle for Fallujah (8 Nov – 20 Nov, 2004).

3. In the another fake article there was the false information that Russian Delegation to OSCE presented fake photo of helicopter with UN markings in Ukraine

The photos were shown as examples of Ukraine’s undertaking of the Anti-Terrorist Operation (ATO) in the country’s east (in Sloviansk and Donetsk) in late May. 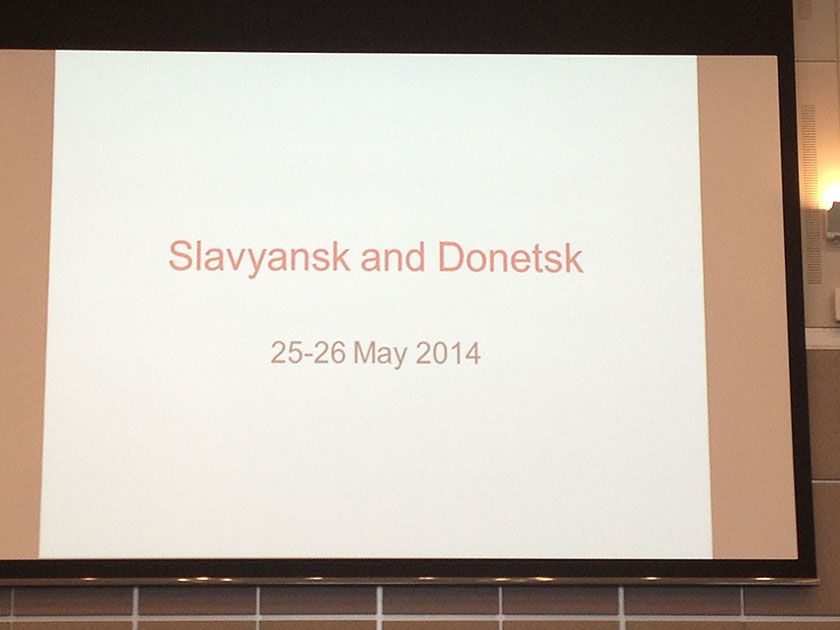 4. Russia Today declared a marginal blog, which accused Ukraine of Malaysian airliner tragedy, as “Western media”. On one website of the International Russian TV channel was published the article in which the assertion of Russia Today that the Western media questioned the involvement of separatists in the tragedy of Malaysian airliner, was a clear and deliberated exaggeration (if the original webpage is deleted you can see it in the web archive of this Russia Today’s page ). The information source was pointed as the German edition Der Freitag but in fact text was a blogging entry in the section Community.

5. On September 20, the official Twitter account of the Permanent Mission of Russia in Geneva published a photo entitled “Modern Ukraine. Human Rights on the Upgrade”, showing a building with Ukrainian and Nazi flags.

In fact it was taken during the shooting of a movie in Kharkiv in 2011. The film was about The Death Match  – a football game on 9 August 1942 in Kyiv occupied by Nazi. It was between the local team FC Start — former professional Ukrainian footballers  and Flakelf, a team of German air defense artillery. After the win Ukrainian players were soon arrested and a part of them executed in Babyn Yar on 24 February 1943

6. There are different proofs how in real the fake stories on Russian “First Channel” are created. For example there is a video about the place where Maidan militants are prepared in a house with a street sign in Lithuanian. (starrting at 1m 30s)

In fact it is a vacation house «Aerodream» for tourists and there is no any secret base there.

Journalist Liz Wahl spoke against propagandist nature of state sponsored Russia Today. She told about cutting off by management of channel RT America such words as “Russian intervention” from interviews and representing Ukrainian opposition as “fascists” and “neo-Nazis”

8.The article of the reporter Stephen Ennis for BBC about fake information on the website of Russian TV channel REN TV. It gave fake news about “mass graves” said to contain victims, including civilians, “tortured”, “executed” and “raped” by retreating Ukrainian troops. I the article were used images of victims of the MH17 Malaysian airline disaster from the Argumenty i Fakty material to illustrate reports about the alleged discovery of “mass graves” in East Ukraine. In reality the OSCE report on 24 September about the graves mentioned by the Russian media said that two of them contained two bodies apiece. It said that at another site there was a mound resembling a grave marked by a plaque bearing the names or initials of five individuals and suggesting they had been killed on 27 August.

9. Another big fake presented the Russian Channel One TV when on November 14 told about the “sensational image”, supposedly made by a foreign spy satellite in the last seconds of Malaysian Boeing flight over Ukraine.

There are a lot of different reasons why the photo is fake such as the fake picture of the airplane with overwing symbols which MH17 Boeing 777-200 didn’t have, and in the picture is definitely not an Su-25 ‘Frogfoot’ ground attack aircraft, as previously claimed by Russian media to have been involved in the downing of MH17. Wrong weather and place on the photo, the scale of the aircraft in relation to each other show that Russian Channel lied. Actually the satellite photo itself is the combination of different satellite map imageries which were published before the tragedy and a lot of other details indicate photo as montage and fake.

10. Even in 2012 Russia was on the 1st place of government financing for newspapers, news agencies and TV channels.

Russia intends to increase propaganda media budget by 250%. In 2015, the federal budget will allocate 41% more to Russia Today TV, its draft budget for 2015 points to 6.48 billion rubles. Subsidiaries of Russia Today will also receive more funding, thus totalling 2.5 times more altogether. Subsidies for the autonomous non-profit organization TV Novosti (TV channel of Russia Today) will amount to 15.38 billion rubles. RIA Novosti, on the basis of which the new agency was created, would get 2.67 billion rubles in 2014, and in 2015 – 2.35 billion rubles. The increase amounts to 142% and 176%, respectively.

In fact the Putin regime makes huge efforts in representing events in Ukraine in its own favour. Actually the most part of propaganda is made by financing all fake information about Ukraine and representing it on TV and by all kinds of media.

For over six months Russian propaganda was more and more losing touch with reality. Stories about the crucified child, and slaves sound so breathtaking; now the world is expecting some more creative and anecdotic news to come. 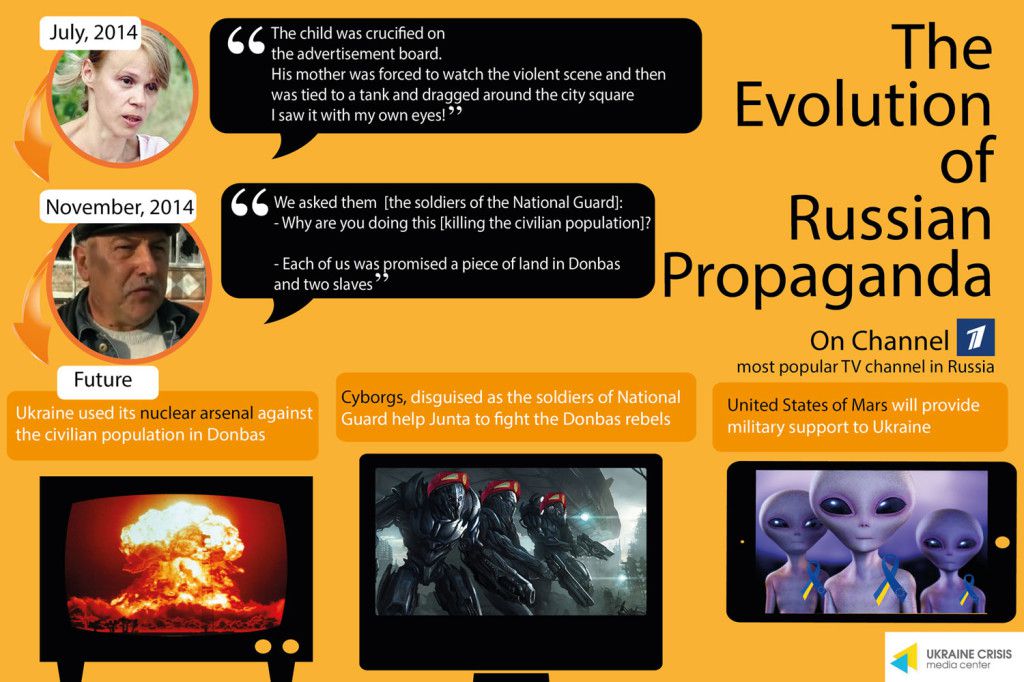