The hopeless situation using the war against Ukraine in order to get Russia to the big stage of geopolitics made Kremlin start another “winning’’ campaign in order to free the next “brotherly’’ nation, this time – Syrians.

However, the Middle East has never been a convenient place to resolve a geopolitical deadlock. On the contrary, the complexity and specifics of the region has always attracted the naïve and unprepared to learn players of “the global team’’ in a long, exhausting and in advance loosing for the uninitiated military – political games.

The Middle East has always been torn by opposites, with the major conflict between the two main sects in Islam – Sunnis and Shiites, each of them competing for the ultimate dominance.

Events in the region, starting from the strategically failed American Iraq intervention in 2003 and the demise of Saddam Hussein regime, transformed the traditional opposition of the radical Islamists on a new level. If before the ruling regimes in Iraq and Syria (during Assad father rule) would not allow the militants for the both groups the freedom for the actions on their territory, currently these countries are practically transformed on the field of war by the religious fanatics. Shiites backed by Iran, Sunnis by Saudi Arabia – both happy with the situation.

The Syrian conflict began as an internal opposition only between the ruling minority and the oppositional majority, but it outgrew into a full religious war between Alawites marhials, backed by Shiites from Iran and the Sunnis who form the majority of the country – the war, a scope of which would spread far beyond the national border of the Syrian state.

Kremlin ‘’Plan B’’ for Syria

Continuation of the sanctions regime, strengthening of the NATO defence potential with the American military presence and the clear reluctance of the USA to reposition the influence regions in Europe and around the World made Moscow look for the alternatives in order to win back the super state status for Russia. 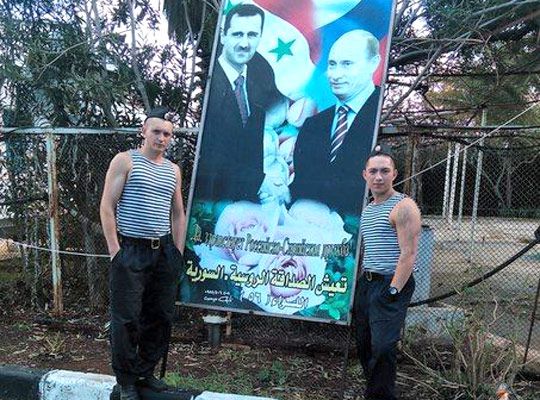 It was important to form a crisis in order to influence the Washington position. This was meant to be a situation where

Kremlin’s “Plan B’’ was planned and presented on the anniversary of the UN General Assembly as if it was a playground Putin would be at least heard from, if not listened to. The triumph did not happen in New York. On the background of the democracy leaders from the civilized world appeal for the protection of the nations from the dictatorships, only Russian leader chose to side the dictatorships from the nations that were oppressed by dictatorships themselves. The idea of the new world coalition just like anti Hitler, hinting on “Yalta – 2’’ and the redisposition of the spheres of influence all pointed to the logical question: who and what does modern Russia win, if it competes for the USSR laurels, one of the winners the Second World War? Putin attempts to shift the focus of the geopolitical agenda on Syria and the fight with the terrorism looked awkward and badly enacted.

It is really clear, neither the geography of the situated Russian military stations in Syria nor their placement would allow the acknowledgment of the active role of Moscow in the war against “Islamic State ’’; its more about supporting the ruling regime of Assad Junior in the fight with the opposition. The USA and its allies air strike campaign creates more losses for ‘’Dzhaish’’, than the attempts of the Russian Air Force and the bombings of “ultra-precise’’ rockets, landing not only on targeted aim but also on the territory of the neighbouring countries.

The following development of Syrian events only proved what the West suspected already: Putin’s actions were not directed to help fighting against jihadists of the “Islamic State’’. They could never be helpful – without a serious land operation, the group “Islamic State’’ would stay fragmented, which makes mass attack difficult, although, of course, it is impossible to win purely with the air strikes. Putin revealed his cards when he claimed that land operation will not take place in Syria, and pointed out the “stabilization of the lawful government’’ was the main aim of Russia in the country.
All Kremlin attempts to somehow replicate its own influence in the region, again proves political impotence of Moscow. The Pentagon duly ignored the arrogant demand of Russia, for the American planes to leave Syrian air space. And the spread of the traditional Russian military- air provocations in the Middle East region was met with a harsh reaction from Turkey, NATO and official statements about readiness to take down any offenders and to use the fifth article of the Washington agreement for the protection of the Turkish territory if required.

The protest against the military actions of Putin regime in Syria, Australia, Sydney, 11 October 2015

Teheran factor and the trap for Moscow

The main Damask and Moscow’s calculation in carrying out the land operation in Syria is in order to help neighbourly Iran. However, the hopes for the Syrian and Russian friends are worthless. Syria is only a strategic springboard for Teheran, in order to spread the influence of Shiites and to have a direct exit to Iraq and Israel.
Iran needs Assad as a way of weakening the Sunnis majority of the country – using Russians. Once this aim is achieved, Iran will appoint the new Syrian ruler, and he will not be an alawite as Bashar and certainly not the Sunnis, but devoted to the religious fight Shiite. Therefore, Assad days are counted, and Teheran is situational in solidary with Washington – that is why Obama is wrapping up the support program for the Syrian opposition fighters. 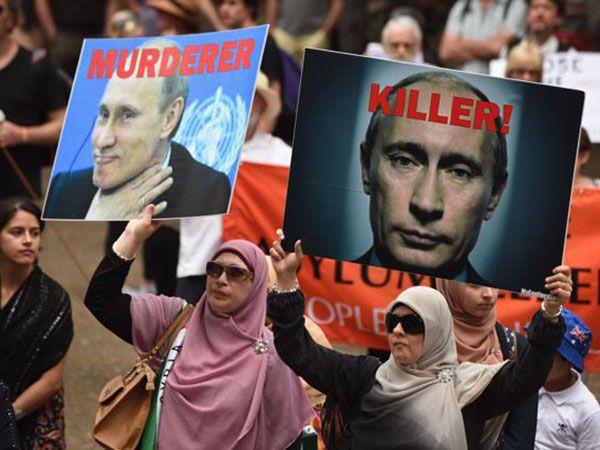 However, Iran strategists do not stop with Syria – the appeals to spread the air strikes to the Iraq territory, made by the local Shiites, Putin is engaging in another war.

Moscow’s participation in the Middle East religious wars siding with Shiites could have another rather unpleasant aspect for Kremlin –Sunnis oppose the Russians in Chechnya, they are not excited about strengthening positions of their eternal enemies…
Bit by bit Russia is engaging in a different war Putin was planning for. Instead of heroic campaign with the winning return of Kremlin to the main geopolitical game, Moscow is becoming an instrument of the radical Islamists and the convenient target for the terrorist attack.

This article was written before the terrorist attacks in France on November 13, 2015. Now Putin is actively using these events as a pretext to return to world big politics and the creation of the antiterrorist coalition with Russia. This was also caused by the active position of far-right parties in Europe, which are partly funded by the Kremlin. It should be recalled that the campaign against terrorism is a favorite instrument of Putin: in the wake of fighting terrorism Putin came to power in a 1999. Terrorist attacks in Russia in 1999, in the organization of which are suspected Russian secret services are still unsolved.