Self-censorship on Ukrainian TV: how do the most viewed TV channels report Poroshenko’s activities

VoxUkraine has analysed the references to President Petro Poroshenko in the weekly TV news bulletins on Sunday and has reached a very surprising conclusion. Either the editorial policy of the four most popular TV channels is biased in relation to the president, or their editors or reporters are prone to the simultaneous self-censorship.

“Either well or not at all”. This is how a manager of a Ukrainian TV channel has described the editorial policy on the reporting of the activities of the president of Ukraine in a private conversation. It is difficult to believe in this given that all TV viewers in Ukraine know that Ukrainian channels criticize the government with no mercy. The desire to check the insider’s information, which seemed not very likely to be true, was one of the factors that motivated this research.

In order to check the hypothesis about the biased reporting of the President’s activities, we have analysed the main news bulletins of the most viewed Ukrainian TV channels in the prime time on Sunday in the last two years. The sample includes the four biggest TV groups in Ukraine: 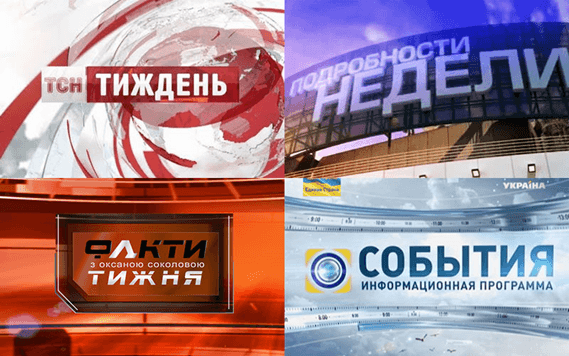 We have gathered the transcriptions of all weekly news bulletins in the period from the inauguration of Petro Poroshenko (June 7, 2014) until July 2016. We have focused on the context in which the most popular TV channels mention the president. We have chosen the surname “Poroshenko” as a unit of analysis, but have excluded the references to the “Petro Poroshenko Bloc” from the results. We have defined as critical those mentions that included a direct or indirect critique. For instance, the mentions of Petro Poroshenko’s political past (particularly about his role in founding the Party of Regions and his work in the Azarov’s government) are also viewed as negative, even though they are not directly critical. Negative mentions have also included the staffing policy of the president (nepotism), breaking his promises, accusations of inactivity and authoritarianism.

In the analysed period, Petro Poroshenko was mentioned 768 times in the weekly news bulletin on 1+1. Only 17 mentions can be viewed as critical or negative. Moreover, the channel’s correspondents themselves made only few remarks: e.g. claiming that “Poroshenko rushed with the terms of creating the coalition” or hinting that Poroshenko wanted to create a controlled parliament in order to “remain the most influential power centre in the country”. One mention was the call for reforms in the light of Poroshenko’s cancelled visit to Brussels: “either real reforms do start or Ukraine disappears”. Another mention was made of Poroshenko’s secret meeting with Firtash and Klychko in Vienna. Three other critical remarks concerned the nepotism (“kumivstvo” in Ukrainian) in relation to Ihor Kononenko and Yuriy Stets. Other critical mentions of Poroshenko were made not by reporters: by Oleh Lyashko (“Poroshenko is trying to suppress the opposition”), Oleh Korban (regarding Hennadiy Korban’s arrest), Ihor Palytsia (Petro Poroshenko is “Yanukovych squared”), Taras Beresovets (regarding “the failure with a non-visa regime”) and Aivaras Abromavichus (regarding his resignation). 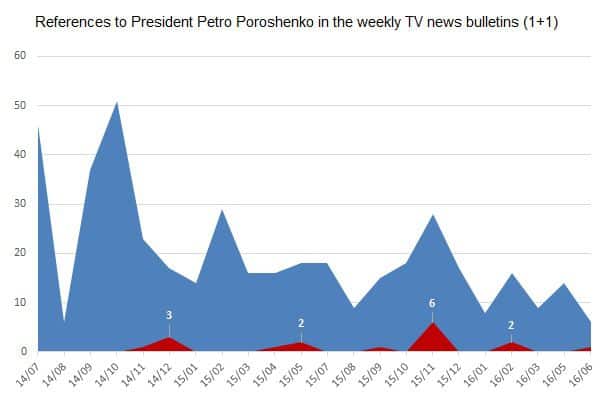 Inter channel has mentioned Poroshenko 803 times in its main news bulletins in two years. Only 12 mentions can be viewed as critical. Two came from the channel’s reporters. The first one concerned the demonstrative arrests in Odessa before Poroshenko’s visit (“an ethnical Lebanese Moris Ibrahim thinks that the recent arrests is an attempt to scare the activists on the eve of May holidays and, in addition, are demonstrative arrests before Petro Poroshenko’s visit to Odessa”). The channel also produced a report named “Petro Poroshenko’s peace plan has not stopped the terrorists”. 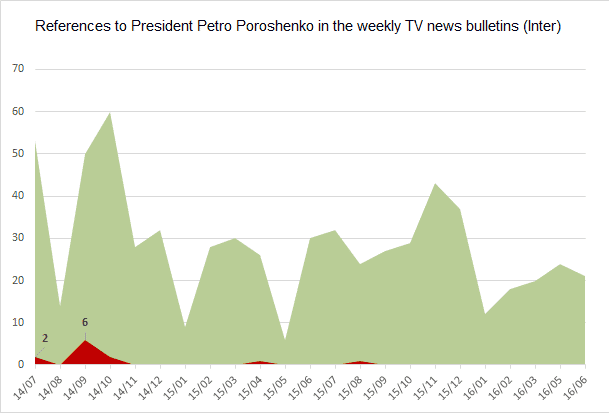 Other critical remarks were made by outsiders, e.g. Oleh Lyashko (about a probable cessation of the ATO), Anatoliy Hrytsenko (twice, about “presidential lies”), Mykola Tomenko (about a prolonged war), Anton Gerashchenko (about state procurement in the defence sector), Diana Gordaya (a volunteer, about the President’s inactivity), and Yuriy Boyko (about the rights of voters in Mariupol). 791 mentions were neutral or positive. Lutsenko was mentioned even more often than on 1+1 in connection with Poroshenko (191 times), while Yatseniuk was mentioned 61 times.

It is interesting that offshores were mentioned 31 times, but not even once in connection with the President.

The President was mentioned 624 times in the main news bulleting on the Ukraine TV channel. Nine mentions can be viewed as critical. Five critical remarks were made by the reporters themselves. All of them concerned the staffing decisions of the president (in particular, the appointment of the President’s close friend Yuriy Stets as a minister). 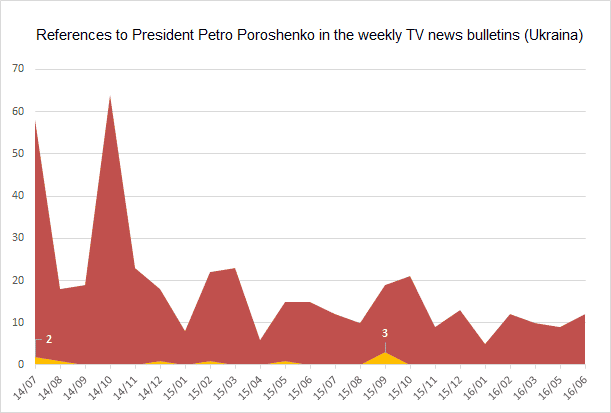 Other negative mentions (four) were made not by the reporters: three of them by Oleh Lyashko and one comment by a military from the ATO zone. Offshores, for instance, were mentioned only twice, with no connection to the president.

Poroshenko was mentioned 742 times in the weekly news bulletins on this channel. 18 mentions were critical. First of all, ICTV stands out among other channels as it has paid some attention to Poroshenko’s political past. For instance, eight mentions concerned Poroshenko’s political careers as a co-founder of the Party of Regions and a minister in Azarov’s government. Other news bulletins on other channels has ignored his political past completely, as if he came into politics from nowhere. Only two mentions are quotes (of a passer-by and a harsh critical remark by Vadim Rabinovych). The rest were made by the channel’s correspondents. Five concern the nepotism problem, which consists in the appointments of old friends of Poroshenko.

Offshores were mentioned 23 times. Unlike on other analysed TV channels, two mentions linked Poroshenko to offshores. Other 724 mentions can be viewed as positive or neutral. Both channels, TV Ukraine and ICTV, mentioned Yuriy Lutsenko more often than Arseniy Yatseniuk in connection to Poroshenko (96 times compared to 83 on ICTV and 63 compared to 47 on Ukraine).

The dynamics of mentions of the president are quite similar on all four channels. The shares of negative mentions are also similar across all channels, with only some minor variations.

Can the low share (1-2%) of negative references to the president point to the (self)-censorship on the top Ukrainian TV channels? For a comparison, a similar research on the reporting of President Obama’s activities can be considered. The report analysed the mentions of Obama’s name during the first year of his presidency in the evening bulletins of the top TV channels in the USA (ABC, CBS and NBC) and on the first pages of New York Times, Newsweek and Time. Media Monitor concluded that “the reporting of president’s activities in the popular media was almost ideally balanced, as 52% of the mentions of Obama were positive”. The reporting of Obama’s activities was more positive than that of Bush, Clinton and Reygan during their presidencies. The balance shifted somewhat during the second semester of his presidency, as the share of negative mentions increased to 62%. As expected, the balance was skewed on the opposition republican FOX channel. 79% of mentions were negative.

Certainly, our research has certain limitations. We have analysed only the main news bulletins of the most popular TV channels and not the whole news content. Yet even if there were an error, e.g. equal to 10%, would this change much? Why is the president given a ceremonial role in the Ukrainian news? “The president has entrusted, met, signed, visited, arrived, stated” – all this as if the president were not an independent political figure that deserves for an assessment of his policies.

The context of references to the president of Ukraine 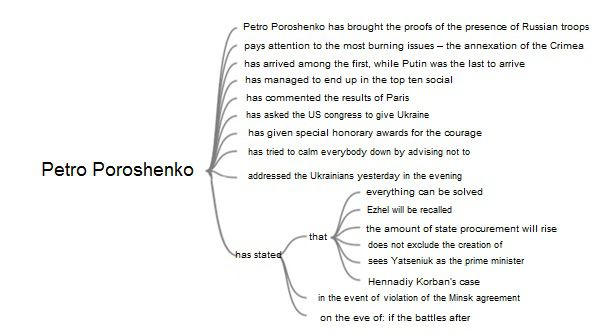 This research poses more questions than answers: what does the low share of critical mentions of the president imply? Does it mean that the owners of TV channels impose such a policy on the editors? Or is this rather a total self-censorship, as the news editors decide not to aggravate the situation in the country with negative reporting during the war? The answer to these questions has still to be found. In the meantime, one can safely say that the president is depicted as a ceremonial figure in the Ukrainian TV news.

In partnership with Nonviolent Solutions Agency