Safety Board of the Netherlands (also known as DSB, Dutch Safety Board) published a preliminary report of the causes of the MH17 flight crash in Eastern Ukraine

Document contain the factual information obtained from different sources including data of onboard flight records and radar stations, as well as satellite imaging and other visual sources.

“The preliminary report is not subject to any criteria in terms of structure or scope. The content is partly dependent on the progress of the investigation and the need to report certain findings,” the DSB website said,

DSB also prepare video with explanation of the preliminary report by Chairman of the Safety Board Tjibbe Joustra (previously,  he was National Coordinator of Nationaal Coördinator Terrorismebestrijding).

Flight MH17 with a Boeing 777-200 operated by Malaysia Airlines broke up in the air probably as the result of structural damage caused by a large number of high-energy objects that penetrated the aircraft from outside.  This is mentioned  in the preliminary report on the investigation into the crash of MH17 that has been published today by the Dutch Safety Board. There are no indications that the MH17 crash was caused by a technical fault or by actions of the crew.

The cockpit voice recorder, the flight data recorder and data from air traffic control all suggest that flight MH17 proceeded as normal until 13:20:03 (UTC), after which it ended abruptly. A full listening of the communications among the crew members in the cockpit recorded on the cockpit voice recorder revealed no signs of any technical faults or an emergency situation. Neither were any warning tones heard in the cockpit that might have pointed to technical problems. The flight data recorder registered no aircraft system warnings, and aircraft engine parameters were consistent with normal operation during the flight. The radio communications with Ukrainian air traffic control confirm that no emergency call was made by the cockpit crew. The final calls by Ukrainian air traffic control made between 13.20:00 and 13.22:02 (UTC) remained unanswered. 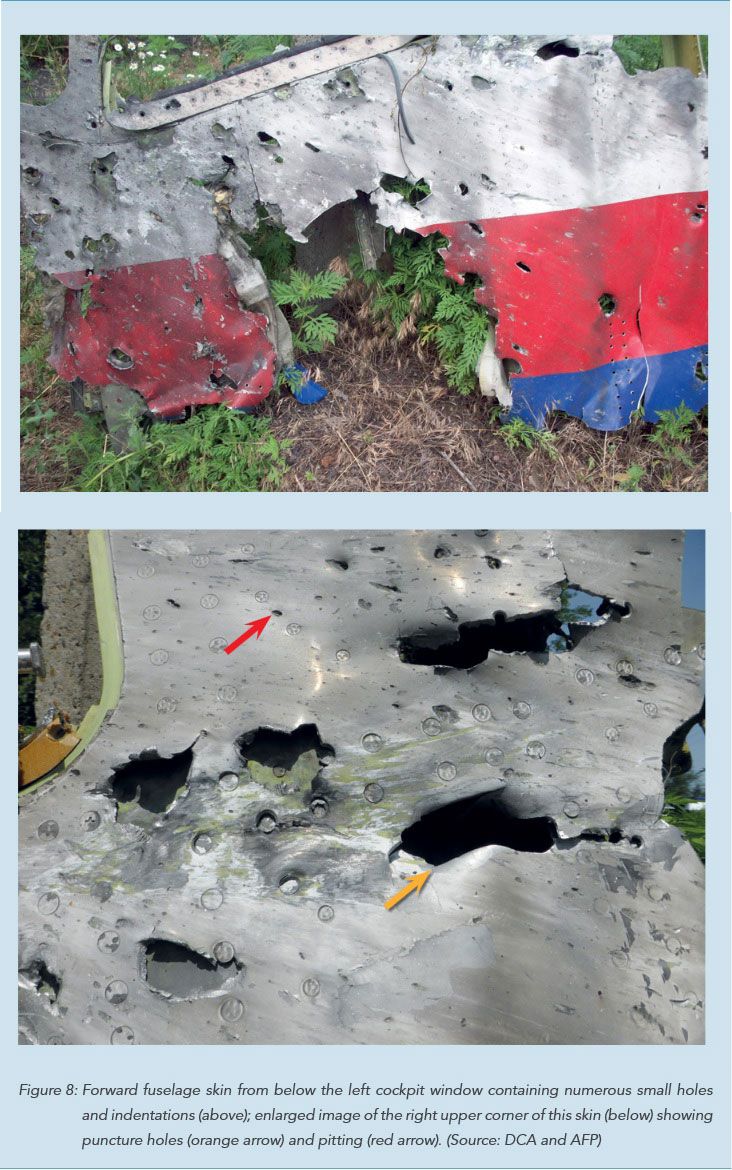 The pattern of wreckage on the ground suggests that the aircraft split into pieces during flight (an in-flight break up). Based on the available maintenance history the airplane was airworthy when it took off from Amsterdam and there were no known technical problems. The aircraft was manned by a qualified and experienced crew. Pattern of damage
As yet it has not been possible to conduct a detailed study of the wreckage. However, the available images show that the pieces of wreckage were pierced in numerous places. The pattern of damage to the aircraft fuselage and the cockpit is consistent with that which may be expected from a large number of high-energy objects that penetrated the aircraft from outside. It’s likely that this damage resulted in a loss of structural integrity of the aircraft, leading to an in-flight break up. This also explains the abrupt end to the data registration on the recorders, the simultaneous loss of contact with air traffic control and the aircraft’s disappearance from radar. 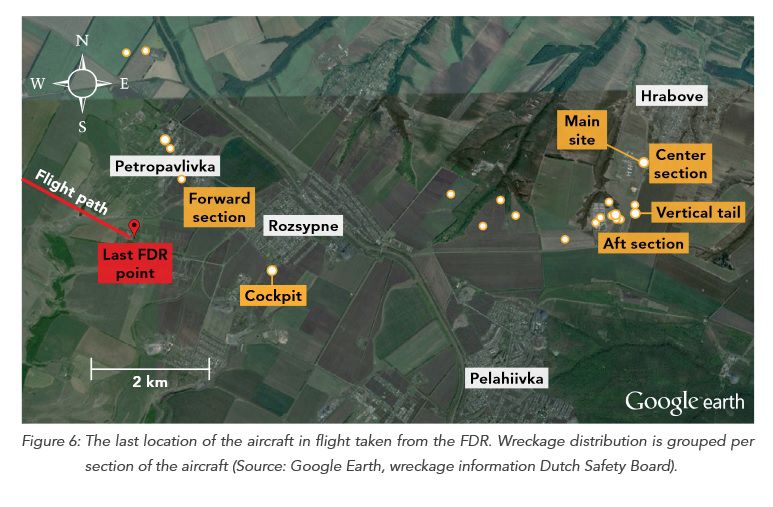 Further investigation
In its preliminary report, the Safety Board presents the initial findings of an investigation that is still fully underway. More research will be necessary to determine more precisely what caused the crash and how the airplane disintegrated. The Board believes that additional evidence will become available in the period ahead. From this point on, the research team will start working towards producing the definitive investigation report. The Board aims to publish the report within one year of the date of the crash.

Procedure
The draft preliminary report has been sent to the Accredited Representative of the states that participate in the investigation (Malaysia, Ukraine, the Russian Federation, the United Kingdom, the United States of America and Australia) for review. All Accredited Representatives have sent a reaction. The Dutch Safety Board assessed the provided suggestions and amended the report where appropriate.

Tjibbe Joustra, Chairman of the Dutch Safety Board:

“The MH17 crash has shocked the world and raised many questions. The Dutch Safety Board wishes to determine the cause of the crash, for the sake of the loved ones of the victims and for society at large.”

“The initial results of the investigation point towards an external cause of the MH17 crash. More research will be necessary to determine the cause with greater precision. The Safety Board believes that additional evidence will become available for investigation in the period ahead.”

“The preliminary report issues the first findings in a ongoing investigation. From this point on, the investigation team will be working towards producing its final report. The Board aims to publish this report within one year of the date of the crash.”

Full report you can find here