Mobile station for heating and humanitarian aid distribution organized by local Ukrainian authorities, Ukrainian military troops and charity organizations continue functioning in Avdiivka. 5 Ukrainian soldiers were wounded in action, 1 got injuries in last day, according to the press service of the Anti-Terrorist Operation (ATO) Headquarters. 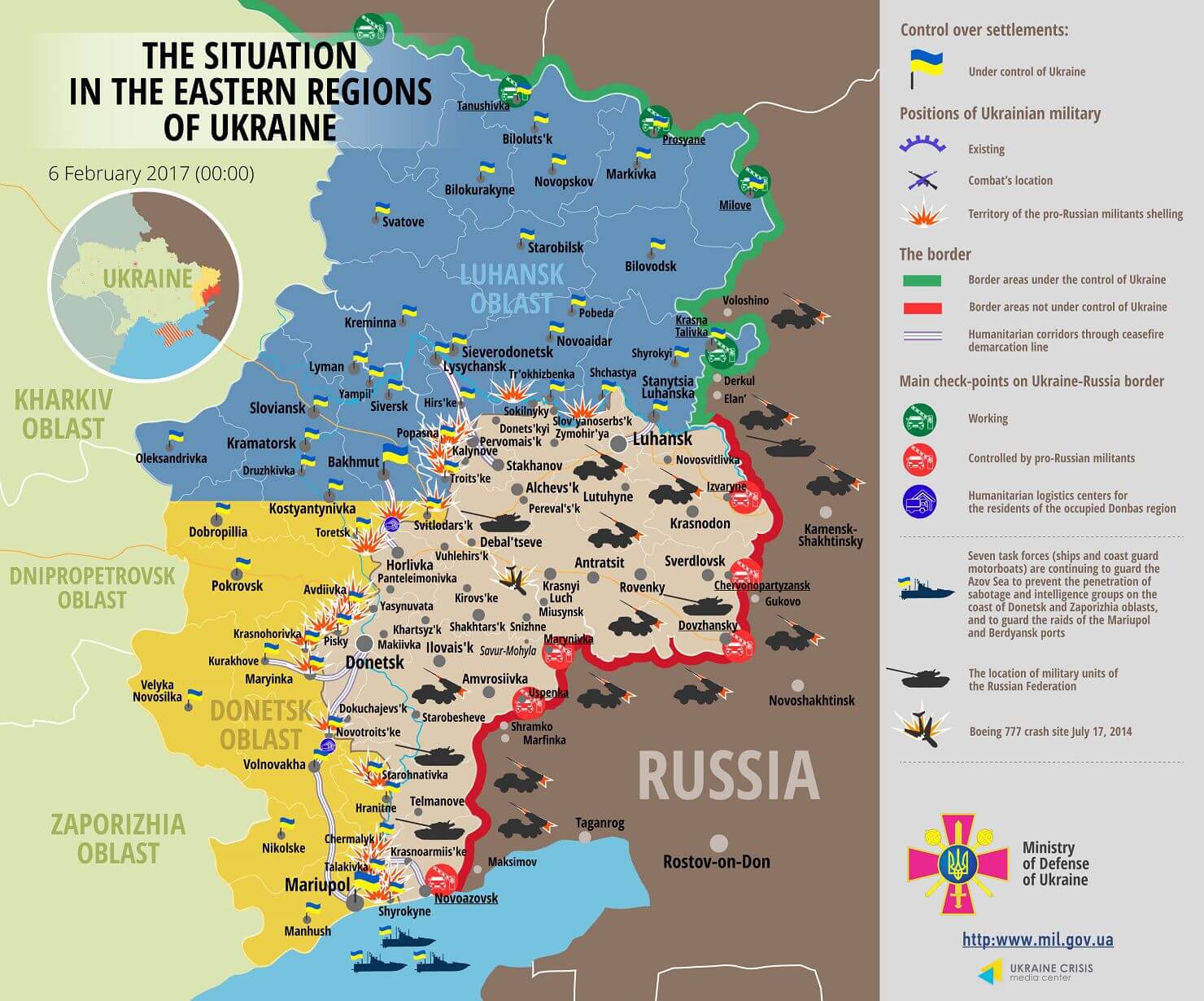 In the Donetsk sector, Russian troops fired at the flanks of Avdiivka in Kamianka area and Butovka coalmine. The situation is similar at the Svitlodarsk bulge, near Horlivka and in the Donetsk airport. Russian troops used heavy armor in every shooting attack from Yasynuvata and Yakovlivka. 12 buildings were damaged in the town. Russian troops repeatedly opened fire from tanks, 120mm and 82mm mortars, rocket-propelled grenades and small arms on the Ukrainian positions near the town of Avdiivka, and the villages of Pisky, Kamianka, Zaitseve, Opytne, Novhorodske, Zalizne, and Luhanske. Nevelske was under sniper fire, and Luhanske was attacked by infantry fighting vehicles.

In the Mariupol sector, Russian troops violated ceasefire along the entire frontline, and militants used heavy armor day and night. Russian troops launched over 180 mortar shells, 55 artillery and 30 tank projectiles. Russian troops used banned 152mm and 122mm artillery systems to shell the villages of Berdianske, Lebedynske and Talakivka. The towns of Krasnohorivka and Maryinka, and the villages of Pavlopil, Vodiane, Shyrokyne, and Hnutove came under mortar fire. They also used rocket-propelled grenades and small arms to fire on Krasnohorivka and Mariinka, and the villages of Lebedynske and Novotroyitske. Snipers were active in Hnutove and Pavlopil. Shyrokyne and Krasnohorivka were attacked by infantry fighting vehicles and tanks. 53 Russian troops’ attacks took place in the last 24 hours in the Mariupol sector, and 19 of them involved use of heavy armor.

In the Luhansk sector, Russian troops were shelling Ukrainian positions in Zhovte, Krymske and in Katerynivka-Troitske frontline area. They use mortar launchers in Novyi Aidar and Popasna districts. Russian troops shelled mortars on the town of Popasna, and the villages of Katerynivka and Novozvanivka, as well as rocket-propelled grenades and small arms on the villages of Krymske, Novo-Oleksandrivka and Troyitske. The villages of Krymske and Zhovte were under sniper fire. In total, 15 hostile attacks took place in the Luhansk sector yesterday, and 5 involved use of heavy armor.