The Ukrainian governmental portal reports that Prime Minister of Ukraine Arseniy Yatsenyuk set out for USA with working visit on June 8-10, 2015.

On Tuesday, June 9, 2015, in the framework of the working visit of Ukrainian delegation to Washington, Prime Minister of Ukraine Arseniy Yatsenyuk met with the United States Deputy Secretary of State Antony Blinken. 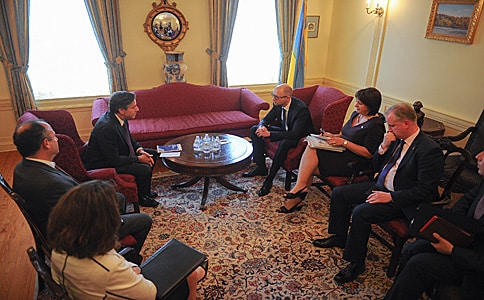 “Antony Blinken noted he highly appreciates and welcomes extraordinary efforts of the Ukrainian Government, who, facing exceptional challenges, demonstrate firm commitment to reforms and have already reached tangible results. During the conversation the parties raised issues of international efforts to support Ukraine. According to the U.S. Deputy Secretary of State, this stance was clearly reaffirmed during the recent G7 summit in Germany. Apart from that, decentralization and positive changes in Ukraine were considered by the interlocutors,” the Ukrainian governmental portal

On Tuesday, June 9, 2015, in the framework of the working visit of Ukrainian delegation to the USA, Arseniy Yatsenyuk met with United States Secretary of Energy Dr. Ernest Moniz.

“The parties discussed topical issues of energy cooperation between Ukraine and the USA.In particular, the talks concerned diversification of energy sources to strengthen the energy independence of Ukraine and cooperation in the field of nuclear energy. They also exchanged views on the complex of issues regarding attraction investments and development of the Ukrainian energy sector,” reports the Ukrainian governmental portal.

“During the event the parties discussed support by the American side of the reform programme the Government of Ukraine had embarked on. The Secretary of the Treasury assured readiness of the US to promote the implementation of the IMF program in Ukraine, including the restructuring of commercial debt. Among the issues considered was granting to Ukraine additional loan guarantees worth USD 1 billion,”- reports the Ukrainian governmental portal.

Arseniy Yatsenyuk on the results of G7 summit: “Support for Ukraine confirmed, no single… http://t.co/F44TadZe3b

Ukrainian Prime Minister Arseniy Yatsenyuk said in the interview with CNN, that US investments will become another protective shield for Ukraine.

“US investors in Ukraine will become another protective shield. This is the way to raise our economy and make Ukraine successful,” said Arseniy Yatsenyuk.

In his interview to the Washington Post Arseniy Yatsenyuk tells that Ukraine is fighting with Russian troops in Eastern Ukraine and with corruption inside the country:

“Ukraine is fighting a war on two fronts. The one you see on television is taking place in the east of our country, where thousands of Russian troops are engaged in an armed aggression against Ukraine’s territorial integrity, including the illegal annexation of Crimea. Less visible, but just as important, is Ukraine’s war against the Soviet past and the legacy of corruption and misrule that has held us back for so many years. These battles must be fought and won together because they are essentially about the same thing — Ukraine’s desire to build a prosperous and democratic future,” Ukrainian PM Arseniy Yatsenyuk.