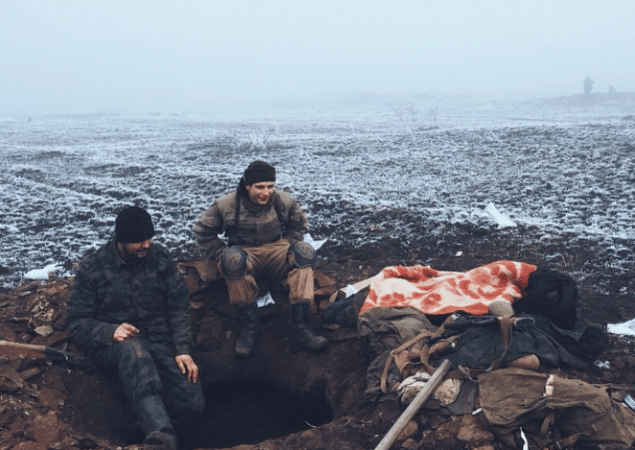 Russian-terrorist troops in Donbas continue grossly violating the terms of the “truce.” Over the last twenty-four hours, the positions of Ukrainian troops and civilian objects were shelled particularly intensely in the Debaltseve and Mairupol directions (the enemy used small arms, tanks, mortars, cannon artillery, and multiple rocket launcher systems [MRLS]). Insurgents, Russian mercenaries, and Russian military servicemen also opened fire in other areas (mainly using 82-mm and 120-mm mortars). We also noted several attempts of Russian-terrorist troops to mount an offensive. Ukrainian troops open fire exclusively in retaliation. In the first half of yesterday (02.16.2015), the Ukrainian side only used small arms (and started using artillery only after mid-afternoon).

In the area east of Horlivka, the accumulation of a battalion tactical group [BTG] of Russian-terrorist groups is de facto complete. This BTG is staffed with military servicemen from two brigades of the Russian Armed Forces (place of permanent dislocation –Southern Military District of the Russian Federation), and consists of up to 350 personnel, 15 tanks (2 of which are out of commission and need repairs), approximately 35 combat fighting vehicles, several ZU-23-2 anti-aircraft units (at least 6), and two dozen specialized motor vehicles. This BTG is supported by an artillery unit (six Akatsiya 2S3 self-propelled artillery units, one of which is out of commission).

Another tactical group is deployed in the area of Vuhlehirsk, staffed by local insurgents (mainly from the ‘Vostok’ gang and the former so-called ‘Donbas People’s Militia’ commanded by Ihor Bezler in Horlivka). The group includes up to 150 personnel, 6 tanks, up to 10 CFVs, 2 armored BTS-4 tow trucks, 6 army trucks, 3 jeeps, and 3 buses. Due to technical faults, the group lost one BTR-80 APC and one MT-LB tow truck during the march from Horlivka.

A company tactical group of Russian-terrorist troops, staffed by Russian mercenaries (of non-Slavic appearance) has been transferred to the area of Verhulivka. The group is pointedly offense-oriented (including at least 15 tanks, up to 10 tented army trucks, six 120-mm mortars, two infantry fighting vehicles BMP-2, and one command and control vehicle based on a BTR-80 armored personnel carrier).

Russian-terrorist units are firing on the positions of Ukrainian troops in the area of Debaltseve, from several directions at once, using cannon and rocket artillery. We recorded positions of cannon artillery northwest of Alchevsk; MRLS fire from the area of Stakhanov; firing from positions to the north of Shakhtarsk and northeast of Makiivka; and occasional MRLS activity from the eastern outskirts of Horlivka. Over the last three days, the enemy’s artillery fire in this area became more organized and systematic; it is highly probable that a specialized artillery command point has been set up in this area.

At the same time, a Russian-terrorist artillery group was spotted moving towardsPervomaisk. The artillery group consists of two batteries (one battery of towed D-30 122-mm howitzers, and one of ‘Gvozdika’ 2S1 self-propelled artillery units).

A convoy of enemy armored vehicles and towed artillery arrived from the direction north of Luhansk and passed through the city to its eastern outskirts. The convoy includes approximately 25 units of equipment and 220-250 personnel.

On the territory controlled by the ‘LNR’ [Luhansk People’s Republic], there is another surge of “gasoline wars” between ‘LNR’ [Luhansk People’s Republic] and so-called ‘Cossack’ formations, which control up to 80% of the gas stations south of  Luhansk oblast. Fuel is delivered to these regions from Russia, by one of two methods: in convoys (10-15 gas trucks in each convoys, with an armed escort) and via contraband “pipelines” laid down earlier. The “LNR” leadership demands that the ‘Cossacks’ hand over part of the contraband fuel “for the needs of the republic,” while the ‘Cossacks’ are unwilling to share their “business.” In late January, two gas stations controlled by the ‘Cossacks’ were ‘sabotaged’ and burned down, as a result of an upsurge of this conflict.