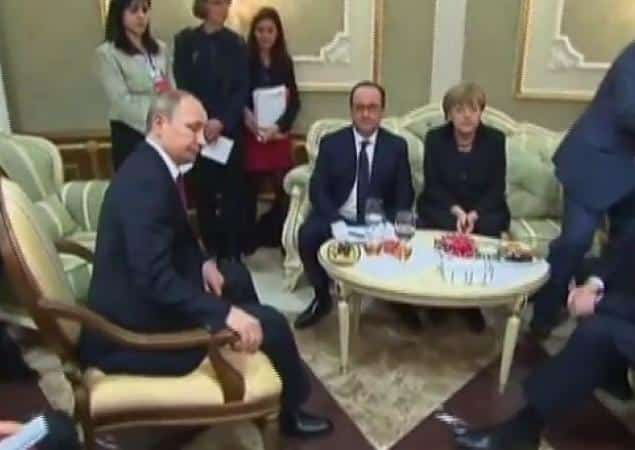 Once again, concerning the “Minsk Agreements:”

As one should have expected, since the Minsk agreements were signed, Russian-terrorist troops have been frantically trying to expand their control zone in Donbas. However, it is crystal clear to us all that, whatever the result of these attempts, there is no point hoping that after 02.15.2015 the terrorists will honor the agreements.

Nevertheless, the society, the expert circles, and the political quarters have been debating for two days now, the question being – did Ukraine win or lose from these agreements?

Allow me to voice my opinion. I allow the possibility that in terms of a “peaceful settlement of the conflict” (a scenario I am highly skeptical of, by definition), the latest signed document is far from a worst-case opinion. With one disclaimer: the agreements are drawn up in a way that the entire subsequent course of events depends on Putin. That is their main flaw.

This means that should the master of the Kremlin decide to continue demonstrating his lunacy, Ukraine will lose. Starting from the fact that, according to the document, “local elections” in Donbas must be held BEFORE the border is closed. Which means [they will be conducted] “according to the Ukrainian legislation” (what a joke), but under supervision of the “little green men” from Russia. This is a “Crimea-2″ scenario, where the election results are determined in Moscow.

This brings up the issue of “lack of autonomy,” something that, according to the persuasions of the Ukrainian government, is supposed to be the case. What “non-autonomy” can we talk about, if the territories in question will have “local” armed formations (the very same “people’s police”) not subordinated to Kyiv? If THAT is not autonomy, I don’t know what the term “autonomy” even means. Plus, this whole “non-autonomy” will stay under powerful Russian influence, and therefore, will remain a potential springboard for Moscow’s new bouts of aggression.

Should Putin act sanely (which is hard to believe, considering his mental problems), and use this opportunity to get out of Donbas without any more fuss and forget the “Novorossiya” project – then the situation will look much more optimistic for Ukraine. Even given all the negative aspects of the Minsk agreements, Kyiv will be able to regain complete control over Donbas, over the next 2-3 years. Granted, only if it implements a wise and balanced strategy (active information work with local population, neutralization of Russian propaganda, forming a public opinion in the region, influencing local government authorities, combating corruption on the local level, the social element, etc.) – which, sadly, is something the Ukrainian government has always been not that good at.

But all of that is theory. The reality is, if someone decided to relax after the Minsk documents had been signed – they are doing the stupidest thing possible. The signatures under the Minsk agreements are nothing, while the arms are everything. As soon as Ukraine shows weakness in Donbas, as soon as our military allow the terrorist to advance, the negotiation results will be worth nothing.