It is expected that next week a number of steps will be taken in order to re-establish the “real” control over the Ukraine-Russia border. Such measures come to force as the result of negotitions, held in Milan. Such statement was released by President Poroshenko, during his press interview with the leading TV channels of Ukraine.

Namely, it is planned that the heads of the border control services of Ukraine and Russia will hold a meeting, during which they will discuss the technical measrues, needed to re-establish the work of checkpoints at the border. Ukrainian border guards as well as customs officials will return to the checkpoints to monitor the movements of people and cargo across the border. It is expected that the border service checkpoint “Izvarine” will re-start its work by the end of the week.

In addition, the President of Ukraine has emphasized that during the meeting in Milan, European leaders expressed deep support to Ukraine. “As of today, there is a firm and clear position, that without the real [conflict resolution] progress, sustainable peace and the implementation of Minsk accords, the question of cancelling sanctions against Russia will not be posed,” commented Ukrainian President. He added, that “the EU has showcased that there is a unitary position within the EU and that the EU expresses its solidarity with Ukraine.”

The main steps to be taken within the Minsk accords are the establishment of the ceasefire regime and implementation of sustainable peace. These measures will serve as the prerequisites to the withdrawal of heavy artillery and the creation of buffer zone in the region. President Poroshenko told that it has been agreed that the special groups of the OSCE monitoring mission will be placed to monitor the situation in nearly 15 spots of the separation line. Such complex of measures will enable the precise determination of who is shelling, who is being shelled and who is violating the Minsk accords.

Other than this, the President has pointed out that all members of the negotiations in Milan emphasized the importance of implementing all points of the peace plan, including those, about upholding elections in the separate regions of Donetsk and Luhansk regions, according to the laws of Ukraine. “The so-called fake elections, which will be held on the 2nd of November or any other day, will be violating the laws of Ukraine, without the upholding of the ceasfire regime, without the presence of international observers cannot and will not be recognized by any of the negotiation’s members,” told the President of Ukraine. 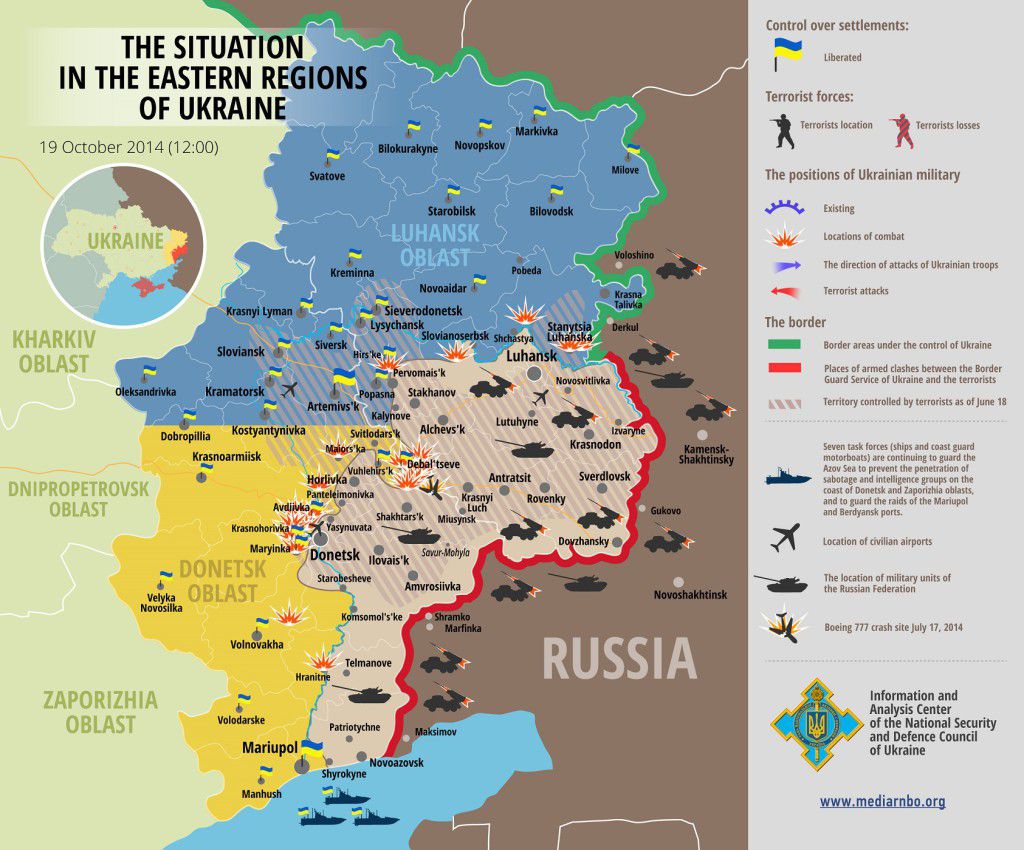 Ukrainian military established full control over the checkpoint number 32 near the Smile locality. The Minister of Defense of Ukraine Stepan Poltorak has reported to the President of Ukraine that neutralize the threats to the checkpoint one raiding fight was held. As the result of the combat, one enemy tank was destoryed; the terrorists suffered great human losses. Ukrainain military did not have any losses; earlier, during the shelling two Ukrainain militarymen got injured; they have already received the necessary medical assiatnce. Two tons of water, food, ammunition and all the necessary products were transported to the checkpoint. Also, additional reinforcement was deployed to the checkpoint to help to defend the position in case terrorists will start the siege. A number of measures have been taken to identify and defuse terrorist saboteur groups in the adjuscent regions. Also, the military dislocation positions get better equipped. No siege attampts have been and are recorder up until now. The spirit of Ukrainian militarymen is high and they are ready to perform tasks of the higher commanders.

For the past 24 hours the terrorists were active in a few spots of the ATO zone. Namely, the terrorists made another false attmpt to siege the Donetsk city airport. The attack was repelled, the terrorist’s forces were damaged and were forced to flee.

On the border positions, controlled by Ukrainian military, no attackes were recorded.

At 22.20 near Sartana locality (near Mariupol), Ukrainian military recorder the flight of one UAV, which was flying on the Mariupol-Kominsternove route. The situation in Mariupol is stable and is under control.

For the past 24 hours, Ukrinain military suffered no losses, 13 militarymen were wounded.

Today, at 13-00 on the Sofiyivska Sq. In Kyiv, the cadets of the “Azov” battalion will be deployed to the ATO zone. The cadets will perform same duties together with the soldiers of the National Guard of Ukraine on the corresponding checkpoints. At the moment, the organizational procedure of transferring volunteer battalion “Azov” (which, today is allocated under the Ministry of Internal Affairs) under the command of the National Guard of Ukraine.

Situation in the localities of the ATO zone

The biggest threat to the civillan population in the occupied regions are the fights between different terrorist gangs on the controlled by them territory. The shellings of city districts are also of a great threat to the civillian population. Namely, the terrorists have shelled Donetsk during the entire second part of the day and at night. As the result of the shellings, four civillians died, nine are injured.

As of today’s morning, the situation in Donetsk remained tense. Due to terrorit’s shellings, a  number of infrastructure facilities have been damaged. One part of Donetsk chemical production plant has been destroyed. The gas pipelines near Petrovske and Kyivske areas of the Donetsk region are destroyed. At the moment, city communal workers are restoring it.

In the meantime, life on the liberated areas in the Donbas region stabilizes; the most crucial problems are being solved. Namely, a concert of children’s talents was held in Slovyansk yesterday. Workers of the department of culture of the Slovyansk local government held a number of concerts to uphold the elevated spirit of Ukrainian soldiers, while they are resting in-between combats. Today, there will be a concert of traditional songs and dances by the performers from the National Guard of Ukraine on the main square of Slovyansk.

International support and reaction on the events in Ukraine

The spokesman of US Department of Defense John Kirby declared that the United States find it necessary to prepare for the potential attack from the Russian side. According to him, “the strategic environment is very dynamic and uncertain right now. And this uncertainty is caused by the actions, which Vladimir Putin is doing within and outside of Ukrainian territory.”

The president of France Fraicois Hollande pointed out the progress in the process of establishing ceasfire and control over the Ukraine-Russia border. “France and Germany have decided to supply the OSCE with the UAVs.” He added, that, “the OSCE is a very important organization in central Europe and will take part in the progress of observing the situation at the border.”

When speaking about the crisis, the Minister for Foreign Affairs of Lithuania Linas Linkevičius said that it is needed to apply greater pressure on Russia by imposing stricter sanctions, and in the meantime expand help to the Ukrainian government.

Minister for Foreign Affairs of Australia Julie Bishop told that Russia’s president Vladimir Putin agreed to influence the pro-Russian terrorists on Donbas in order to maintain the investigation of the MH17 plane crash. She spoke about the meeting with Vladimir Putin, which took place in the couloirs of the ASEM forum. “I asked him to use Russia’s power to influence the separatists in the east of Ukraine in order to let our investigators to the crash site,” said Julie Bishop. “Vladimir Putin has admitted that Moscow has the influence on separatists and promised to make an effort to fulfill my request,” concluded the Minister.