Kyiv, October 24, 2015. Ukrainian troops finished the first stage of withdrawing military equipment and weaponry, including tanks, in the Donetsk sector.

Two militant provocations were recorded in Shyrokyne yesterday, when militants fired randomly at ATO troops’ positions using light arms and grenade launchers. He elaborated that in general the situation in the ATO zone remains stable. According to the information collected, Russian troops retreated from the frontline and settled on the both sides of the section of the border temporarily uncontrolled by Ukraine. Nevertheless, militant drills continue and weapons are still being brought in from Russia. Ukrainian Armed Forces incurred no losses in the past 24 hours and no Ukrainian troops were wounded in combat. Nevertheless, a local inhabitant tripped a wire near Berezove in Volnovakha district. Doctors are fighting for the man’s life at present. 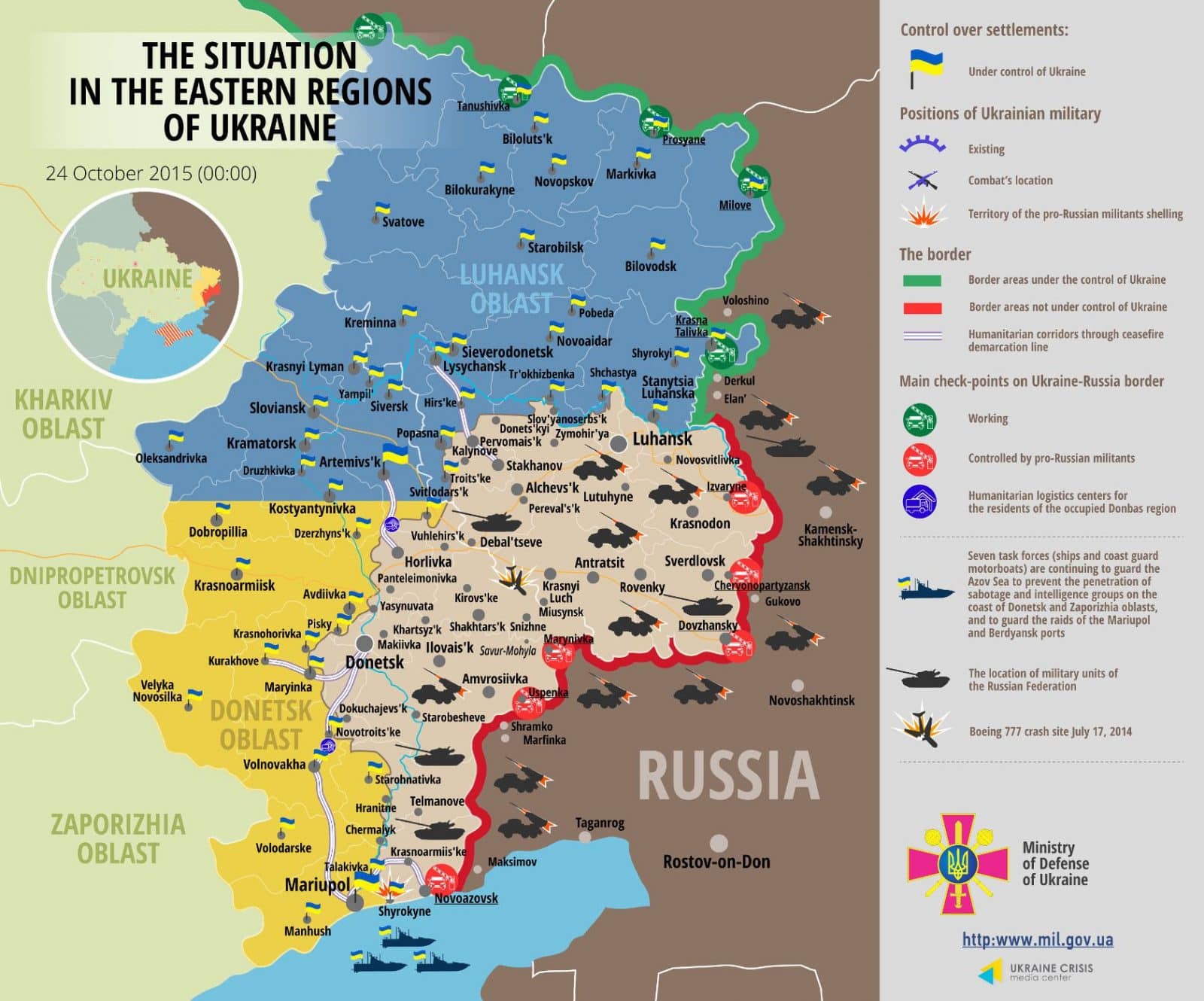 Nine trucks carrying humanitarian aid from charity organizations proceeded to the temporarily uncontrolled territory through Novotroyitske and Zaitseve checkpoints. The situation gets more complicated as militants are exerting systematic pressure upon international missions working in the east of Ukraine, namely the United Nations and Organization for Security and Co-operation in Europe. Moreover, militants banned the activity of ‘Doctors Without Borders’ international organization on the insurgent-controlled territory with no good reason.

Ukrainian Special Services detained a number of people actively cooperating with the self-proclaimed ‘Luhansk People’s Republic’ (LPR) and ‘Donetsk People’s Republic’ (DPR). Ukraine’s Security Service detained a former traffic police officer, who was a militant informant, in Velyka Novosilka in Donetsk region. Mobile terminals he used to communicate with militant groups and over 11,000 USD were seized while searching the detained man’s possessions. A militant from self-proclaimed ‘DPR’ was detained in Zaporizhzhia, and a ‘secretary’ of the ‘Molodaia Respublika’ (Young Republic) separatist organization, which trains militants, was arrested in Kyiv region. This so-called ‘secretary’ turned out to be visiting Moscow regularly for reporting and getting new instructions.