Kyiv, November 8, 2015. Over the last day Ukrainian Armed Forces suffered no casualties, neither was any soldier wounded in action. The situation in the Luhansk sector remained calm, but in Donetsk and Mariupol sectors pro-Russian militants violated cease-fire. The militants used small arms and rocket launchers of different systems in the vicinity of Horlivka. Near Novoselivka Druha in Yasynuvata district the enemy made one shot from an 82-mm mortar. Enemy snipers are active in the Donetsk airport area, so it is restless there. In Mariupol section last night militants opened fire from small arms and grenade launchers near Hranitne in Volnovakha district Donetsk region. 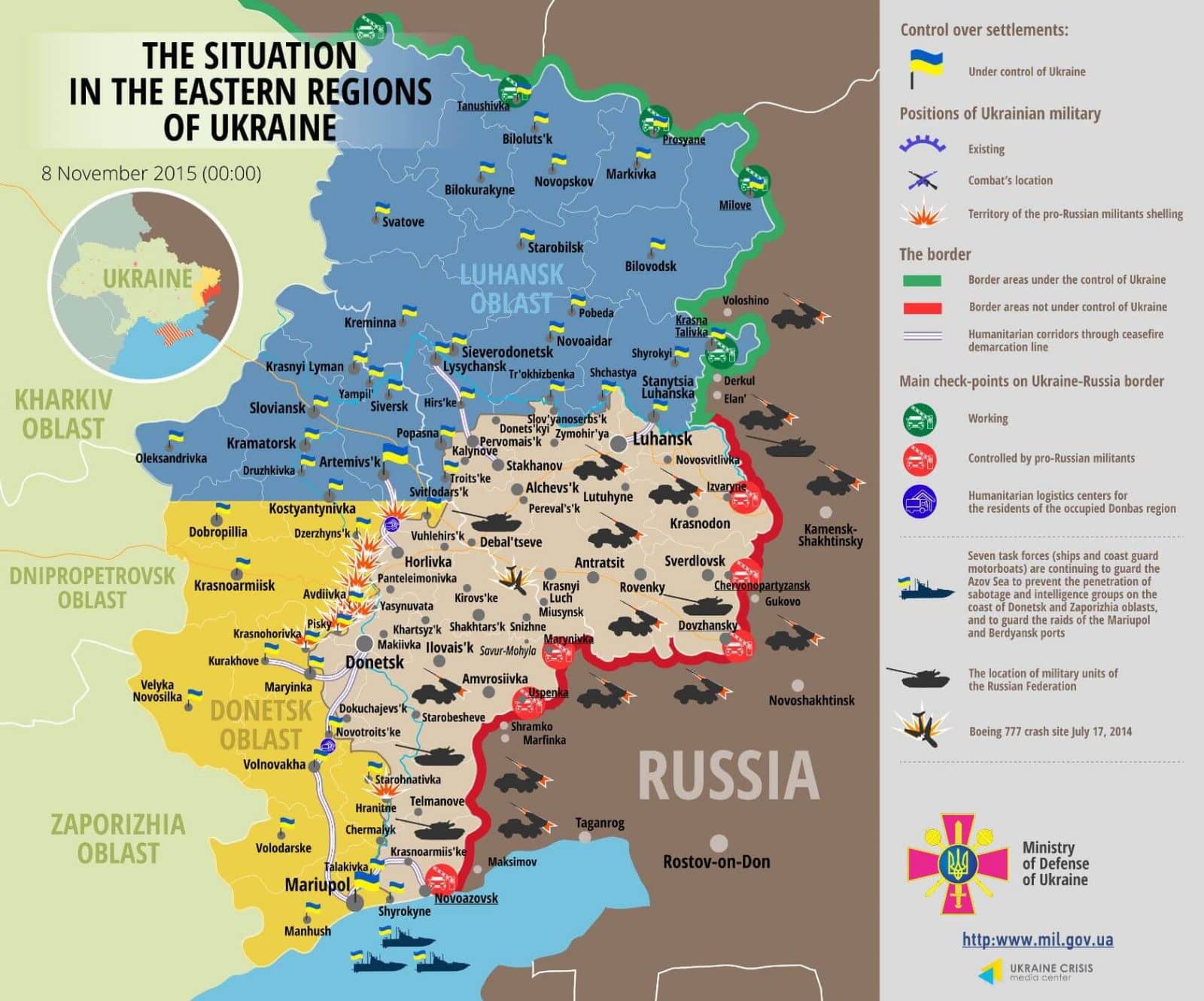 The leaders’ of the so-called “Donetsk People’s Republic” (“DPR”) statements on the alleged Ukrainian use of rocket artillery are untrue. Ukraine and its Armed Forces strictly comply with the Minsk agreements under which the Grad, Urahan, Smerch installations and other heavy weapons have long been withdrawn to an agreed distance from the boundary line. OSCE Special Monitoring Mission documentarily recorded this fact by thoroughly verifying each unit of the assigned equipment.

A resident of Artemivsk who has been wanted since last year was detained in Kyiv. He had participated in capturing Slovyansk city council and in recruiting fighters for the so-called “Luhansk People’s Republic”(“LPR”) and “DPR”. In addition, security forces discovered several caches of weapons: one in the forest near Hnutove, not far from Mariupol, with two hand antitank grenade launchers RPG-22, the other – in Donetsk region, with four boxes of 125 mm high-explosive tank shells and powder charges to them. According to a preliminary version, the ammunition was intended for laying landmines on the Ukraine-controlled territory. In addition, at the checkpoint near Selidove two RGD grenades were withdrawn from a local citizen. In Krasnoarmiysk a young man was badly injured while trying to saw an artillery shell with a grinder to pass it for scrap.

Another batch of humanitarian aid from Ukrainian and international charity organizations, including the Red Cross, arrived in the ATO area. 29 trucks with food parcels, building materials and equipment necessary for the reconstruction of infrastructure crossed the Novotroitske checkpoint.