National Security and Defense Council:Militants have violated the ceasefire 100 times over the past day

Kyiv, July 31, 2015. A record number of attacks by militants has been reached over the last 24 hours. Yesterday, an unprecedented number of ceasefire violations by militants were recorded, exceeding 100 attacks. Such number of armed provocations by the enemy has not been recorded for more than a month. 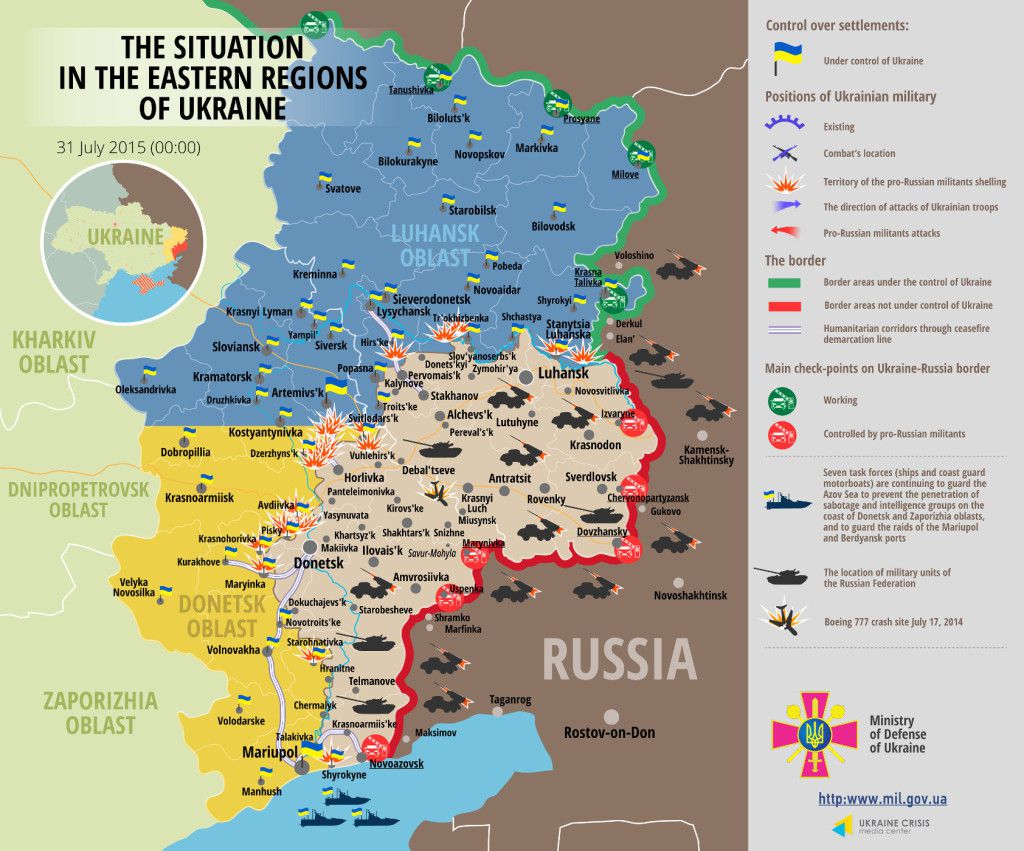 In the Luhansk sector, militants continue their ‘harassment’ fire against the strongholds of the Ukrainian forces in Luhanska,. Russia-backed militants are still firing under the cover of night, and in particular, the 120mm mortar of the militnatsn could be heard for two hours in the evening. Also, in the morning near Luhansk, a mortar attack by the militants near Bolotene took place, and there were two attacks by the militants to the north of Bahmutskyi road. In addition, in the evening, the militants fired on our troops at defensive positions between Zolotne and Pervomaisk. This is an urbanized area, which is why any provocations there by militants pose an increased threat to civilians.

On the Donetsk front, the militants’ mortar fire continued for roughly 12 hours on leading Ukrainian positions near Svitlodarsk. Militant provocations continue along the western perimeter of the militant-controlled area in Horlivka from Mykolaivka Druha to Novhorodske. The fronts from Avdiivka to Mariinka have experienced more than half of ceasefire violations by the illegal armed groups in the entire ATO area. At the same time, the highest concentration of militant’s heavy arms is located in this are. However, such provocations may not result in a change on the front line in favour of the enemy. The ATO forces will maintain their positions.

On the Mariupol front Ukrainian positions near Starohnativka became the epicentre of military activity. For about six hours before and after dawn, the militants continued their attacks using 122mm cannons. The shelling was conducted from a distance of more than six km. Later in the afternoon, there was a short-term armed provocation by militants in Shyrokyno. Other lines in the area remained calm throughout the day yesterday. Two Ukrainian soldiers were killed and seven were injured due to fighting yesterday.

The United States has imposed another round of sanctions against Russian businesspersons and companies in response to Russian aggression against Ukraine. Several Russian banks, subsidiaries of Rosneft, ports in Crimea and Kerch Ferry Crossing, as well as IzhMash Concern – worldwide known manufacturer of Kalashnikov rifles – were included on the black list. In addition, Russian businessmen and top managers of defense companies, as well as former Ukrainian officials, including three persons close to Viktor Yanukovych – Andriy Klyuiev, Serhiy Kurchenko, and Oleksandr Yanukovych – were included on the updated black list. From now on, such citizens are not allowed to enter the US and lose access to assets in the country.

Ukrainian security services in the Kharkiv region have prevented the shipment of military goods to Russia. The offender, who tried to export the military goods in his own car under the guise of moving general industrial products, was detained at the Hoptivka checkpoint on the Kharkiv – Belhorod – Moscow highway. The law enforcement officers have prevented the attempted export of weapons from the ATO area. During the search of the car moving from Shchastia, four F1 grenades, RGD-5 hand grenades with fitted fuses and nearly a thousand and a half 5.45 mm cartridges were found.

In addition, police officers found a parcel with ammunition at the warehouse of a delivery service in Sloviansk. Law enforcement officers found two grenade fuses, four detonators, two packages of gunpowder, plastids, and more than five hundred 5.45 mm cartridges. According to the invoices, dangerous goods were transported from Kostiantynivka to the Zhytomyr region. The goods were sent by a woman, and her whereabouts are under investigation.

At the checkpoint near Svatove, Luhansk region, police officers stopped a car driven by a resident of the Kyiv region. During the inspection, the police officers found and seized three knives, five grenades, and more than one hundred cartridges of different calibres.