Kyiv, July 22, 2015. In the Luhansk sector, Russia-backed militants instigated several provocations in the Stanytsia Luhanska, Stary Aidar, Zolote and Troyitske, using small arms and machine guns. No heavy weapons use was registered. In other areas in the Luhansk sector, separatists fully observed the ceasefire. In the Mariupol sector between Komsomolske and Volnovakha, separatists briefly fired from a tank onto ATO forces. Moreover, militants fired several times in Shyrokyne. 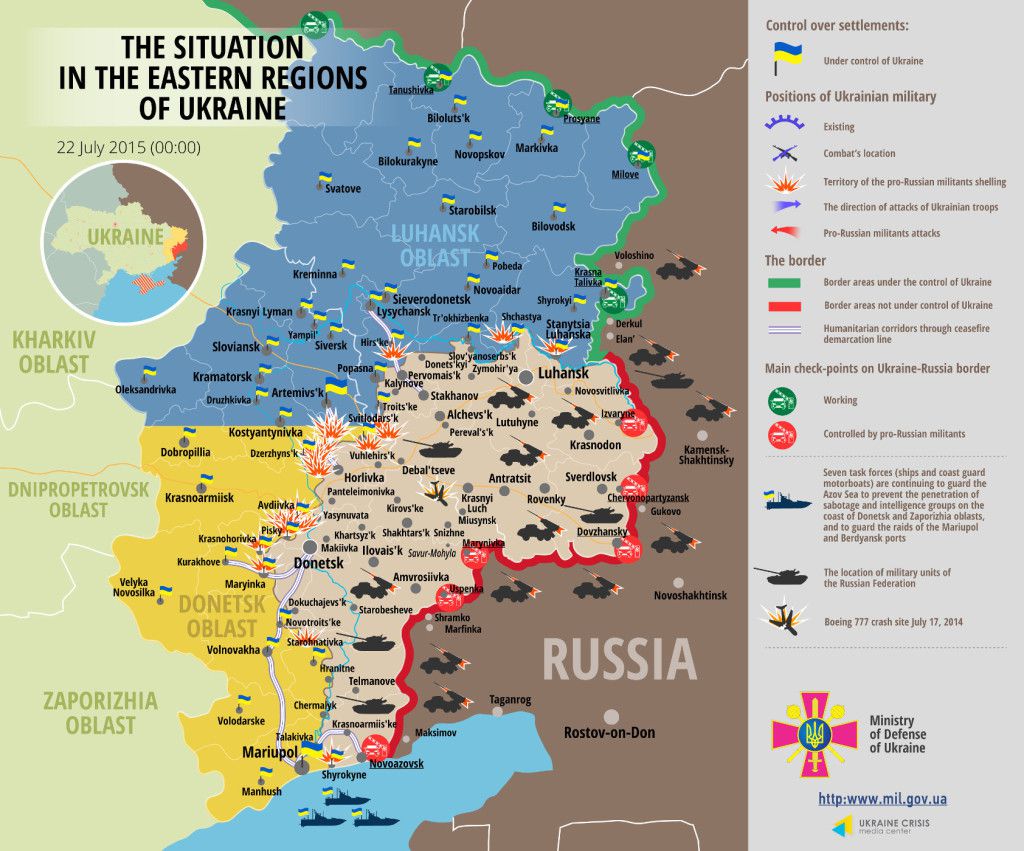 The situation in the Donetsk sector remains complicated in the area between Svitlodarsk and Horlivka. Militants fired on Ukrainian positions with 120-mm mortars and 152-mm artillery between Sanzharivka and Novhorodske. Adjacent towns as well as sites with strategic infrastructure came under militant fire from heavy weapons. In western outskirts of Donetsk, there were combat actions in the last week between Avdiivka and Maryinka. Militants fired at our positions from mortars and tanks. No incidents of artillery use by militants in this section were registered. The ceasefire is holding in the south of Donetsk.

Ukrainian Armed Forces incurred no casualties during the last 24 hours. Five troops were wounded in action, all in the Donetsk sector.

Ukraine’s Security Service detained residents of Luhansk region who had set up a money-laundering center in Kharkiv region to finance the “LPR” militant group. In the capacity of couriers and directors of fictitious firms, militant accomplices were cashing money from bank cards and check books. The cash was collected in office premises and later sent to Luhansk region for militant groups. Ukrainian operatives prevented transfer of the next money consignment, having seized over three million hryvnia, a large number of bank cards, check books and tax certificates in the amount of one million five hundred thousand hryvnia as well as financial documents.

Ukrainian law enforcement, in cooperation with volunteers, prevented nine smuggling attempts into the occupied territories. Law breakers are mostly attempting to smuggle food, low-alcohol beverages, construction materials and scrap metal. The goods are usually immediately sent to militants as supplies or are put on sale to the locals at elevated prices.