National Security and Defense Council:Ukrainian military destroyed a tank and neutralized around 60 militants

Kyiv, 27 January 2015 – Ukrainian military are inflicting considerable losses on the militants. This resulted from the well-coordinated and professional actions by the units of “Pivnich”, an operational command that are taking part in the anti-terrorist operation (ATO) in the Shashtya and Vesela Hora localities. Atank was destroyed and around 60 militants were neutralized. As many as 300 more terrorists were wounded. Yesterday, Ukrainian servicemen detained a tank driver, a citizen of the Russian Federation, and a resident of Krasnodarsky Krai. When interrogated, the militant said he had three criminal convictions, including the theft of a car. Instead of imprisonment, the Head of the Rostov-on-Don police suggested to a burglar to go to the eastern Ukraine for a month to defend the so-called ‘Russian world’ and promised to drop all charges against the criminal upon his return and close the criminal case. 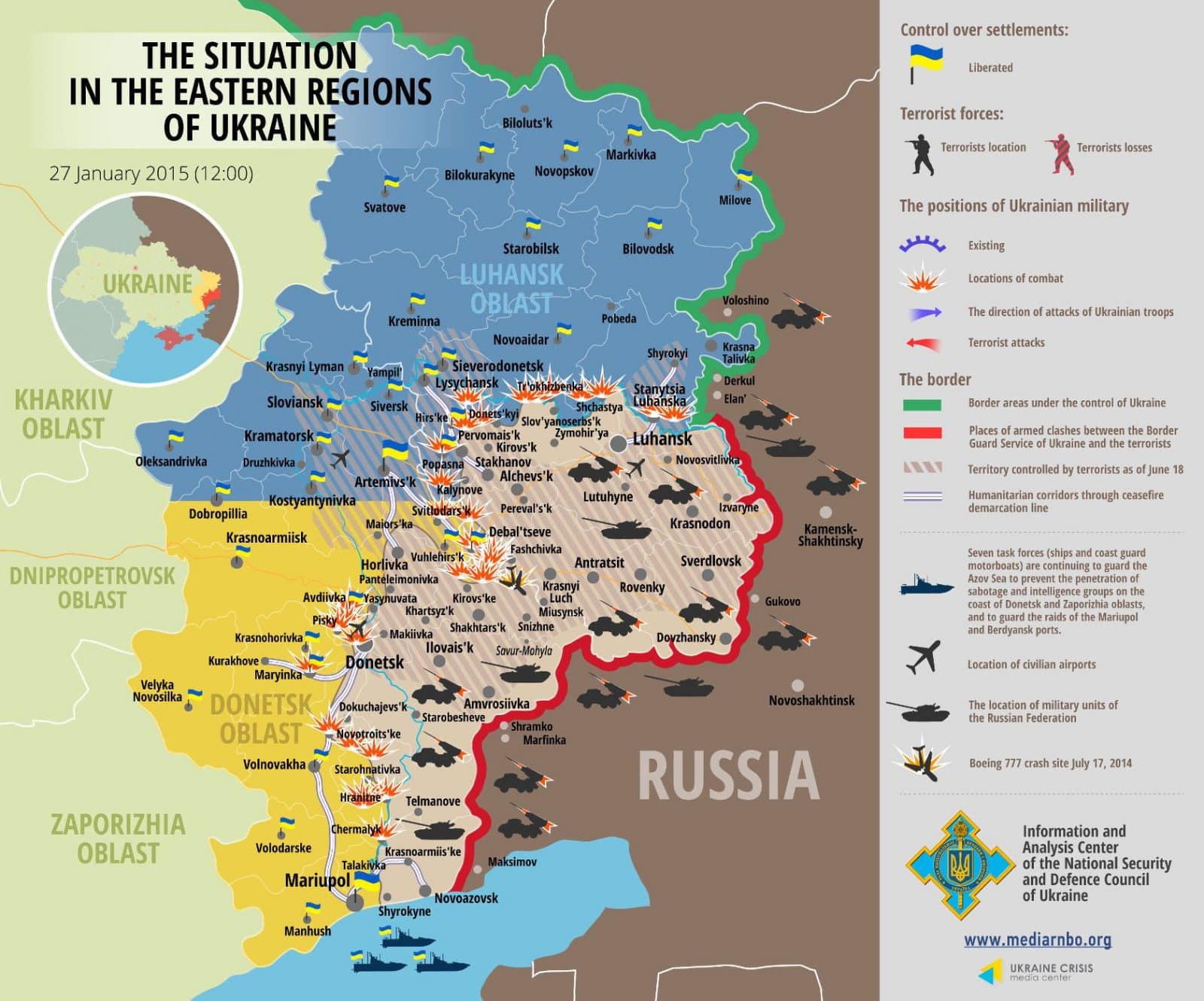 Russian troops and armed militants continue their attempts to attack the ATO forces’ positions. The enemy is trying to strike Ukrainian military units and take strategically favourable positions to launch further military operations, first of all in the area of the cities of Debaltseve, Vuhlehirsk and Mariupol of Donetsk region.

At the Donetsk, Mariupol, Debaltseve, Luhansk and Pervomaysk directions militants fired a number of times at the ATO forces positions using artillery, mortars, grenade launchers, tanks and Grad multiple rocket launchers. Militants took to storming of our positions a number of times near localities Debaltseve and Sanzharivka of Donetsk region, Novotoshkivske, Orikhove, Stanytsia Luhanska and Krymske of Luhansk region. All militants’ attacks were repelled. 9 Ukrainian servicemen were killed in action in the last day, 30 were wounded.

Yesterday the Security Service of Ukraine publicly presented proofs of the crimes against humanity committed by the “DPR” militants and by Russian military.On 24 January militants shelled 5 times Mariupol’s residential areas following direct orders by the Russian military, said the Ukrainian military spokesman. The attack that resulted in 30 killed and over 100 wounded city residents was made by forces of the “DPR” criminal group armed with “Tulpan” self-propelled artillery systems and Grad multiple rocket launchers, he added.  All proof for the complicity of militants and of the Russian Federation Armed Forces in the crime were presented to the diplomatic corps members on service in Ukraine, including the Russian Ambassador. Demonstrating support to Ukraine in its fight against the aggression MEPs – members of the Foreign Affairs Committee of the European Parliament call on the EU to tighten sanctions against Russia and provide Ukraine with defensive equipment that Ukrainians can use to protect themselves.