Kyiv, February 17, 2015. The situation around Debaltseve is extremely tense and changes nearly every hour. Pro-Russian militants do not comply with the ceasefire regime, firing at the city and its outskirts, conduct subversive-terrorist acts, and storm positions of the Ukrainian Armed Forces, attempting to take the Debaltseve at any cost. Ukrainian Armed Forces and of other units that defend Debaltseve are maneuvering and deterring enemy’s aggression with fire in response. We herewith underline that the Ukrainian forces have been ordered to retaliate in response to the enemy’s aggressive actions or to the shelling of residential areas. 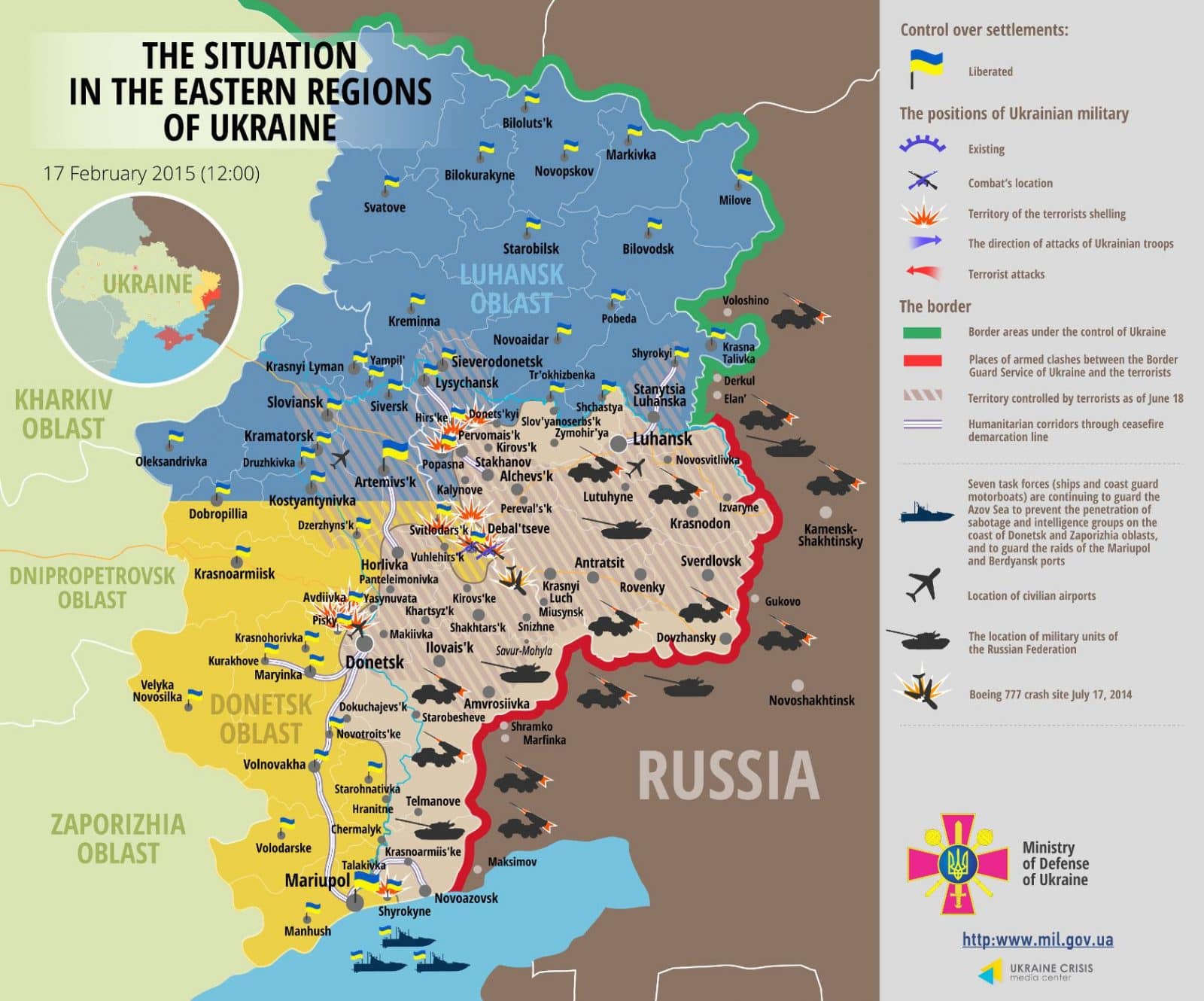 Several subversive-reconnaissance militant groups broke into the city and fought with the Ukrainian forces. Militants attacked Debaltseve with assault groups supported by the artillery and armored vehicles. City’s outskirts have been seized by militants today. At the same time they stormed positions of the Ukrainian troops several times.

A group of servicemen of the 101st security brigade of the General Staff of Ukrainian Armed Forces and the 8th special forces regiment was ambushed and taken captive, while accompanying a supply convoy with the Ukrainian equipment for the defenders of Debaltseve. The convoy engaged in combat. However, the soldiers were taken captive after they ran out of ammunition and lost their. As a result, one serviceman was heavily injured.

Negotiations of participants of the Joint Coordination and Control Center for ceasefire and stabilization of the delimitation line took place in Soledar in the Donestsk region. Insurgents and Russian regulars are blocking access to the OSCE observers to Debaltseve, arguing that might endanger their lives. Representatives of the so-called “DPR” and “LPR” did not order their proxies to cease their attacks, arguing that they do not have communication with the frontline units, as well some of them are unaccountable to the leaders of the self-declared republics.

Militants admitted they had violated it ceasefire after its introduction. Thus Mr. Basurin, a “DPR” representative, personally stated that militants did not stop the shelling of Debaltseve and have the right to shell as “their own” territory.