Kyiv, February 9, 2015. Most tense situation in the anti-terrorist operation zone remains around Debaltseve. Insurgents amass their forces in the area bordering with Stakhanov and Snizhne. Russian mercenaries shelled the city and its outskirts 13 times and tried to storm Ukrainian positions 5 times but to no avail. Militants also got no success trying to storm strongholds of the ATO forces near the towns of Kamjanka, Luhanske, Novohryhorivka and Chornukhyne in Donetsk region. Ukrainian Armed Forces repelled all attacks. Pro-Russian militants try to take over Debaltseve, pursuing a political goal of giving their Russian leaders an advantage that wuld allow to force Ukraine to sign truce on Kremlin’s terms. 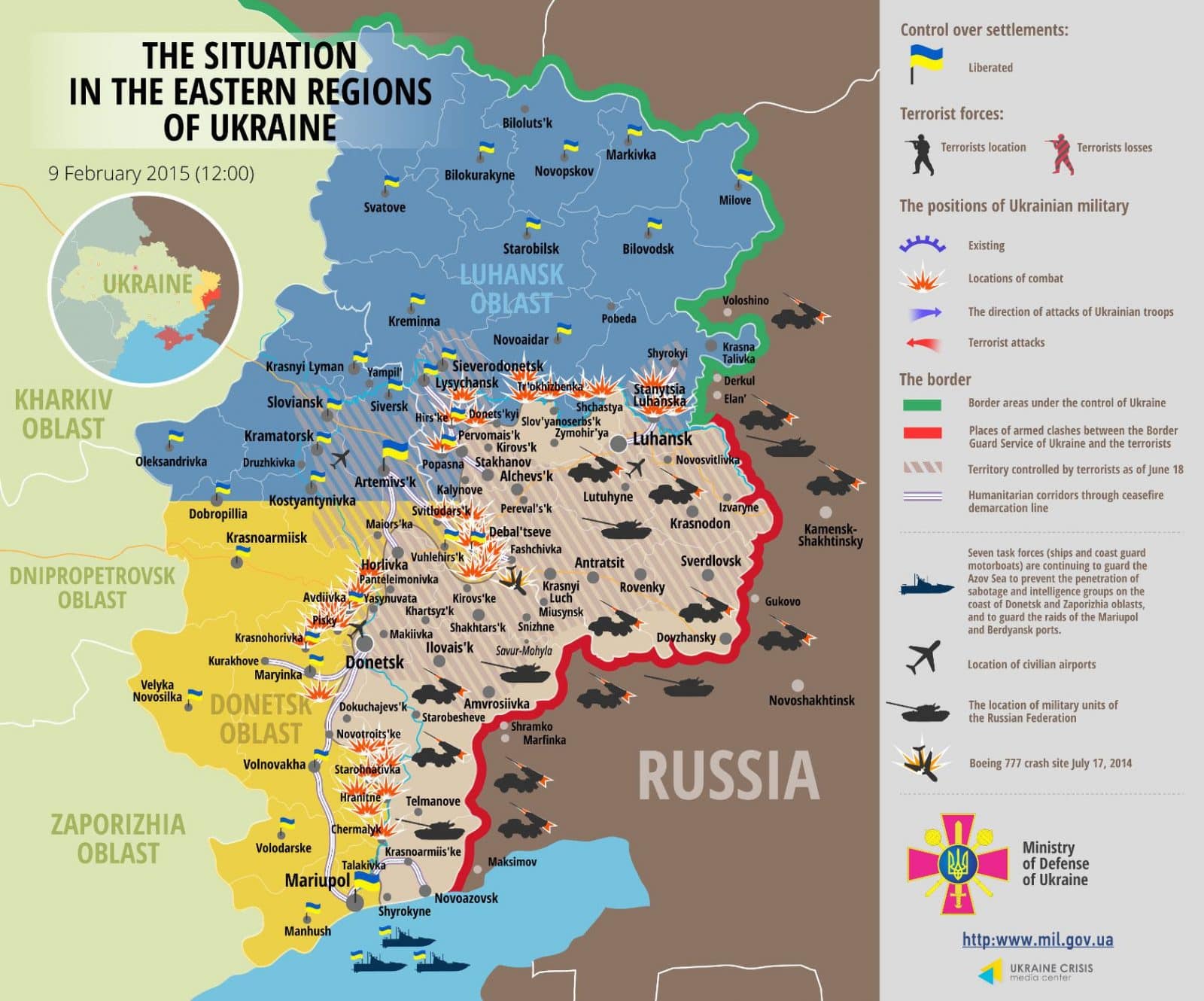 According to the intelligence reports, Russia keeps sending arms, ammunition, fuel and automotive oils to the occupied territory of Donbas. On 7-8 February, approximately 1,500 servicemen of the Russian Federation Armed Forces and over 300 units of military equipment, including self-propelled artillery systems, BM-21 Grad multiple rocket launchers and tented trucks crossed the Ukrainian state border at “Izvaryne” border crossing point. The convoys were heading to Luhansk, Debaltseve and Antratsyt.

Ukrainian servicemen destroyed the enemy’s tank in the area of the 31st block post yesterday. “Our soldiers have recently seized the enemy’s T-72 tank. They found documents and field rations of the Russian army inside. We herewith remind that the T-72 tank is not produced in Ukraine,” explained Andriy Lysenko.

Arrival of another Russian so-called “humanitarian convoy” to the territory of the occupied Donbas stands as a destructive factor that could lead to further escalation of the armed standoff in Donbas. 70 vehicles entered through the “Donetsk” border crossing point (including 41 trucks, 21 fuel trucks and 8 maintenance and escort vehicles), while 103 vehicles entered through the “Matveev Kurgan” border crossing point (including 73 trucks, 20 fuel trucks, 10 maintenance and escort vehicles). All these facts demonstrate that Russia completely ignores the Minsk agreements and diplomatic efforts that the international community is currently making to de-escalate the situation in Eastern Ukraine.