Kyiv, July 1, 2015. Ukrainian troops came under fire from Grad multiple rocket launchers in the area of Zolote and Vrubivka, Luhansk region. The village of Vrubivka is located further back – the distance to the frontline is over 15 kilometers. Militants shelled Ukrainian positions in the vicinity of Novotoshkivske and Stanytsia, Luhansk region, in the evening. As a result, infrastructure reparations and full power and water supply restorations around Stanytsya remain complicated. 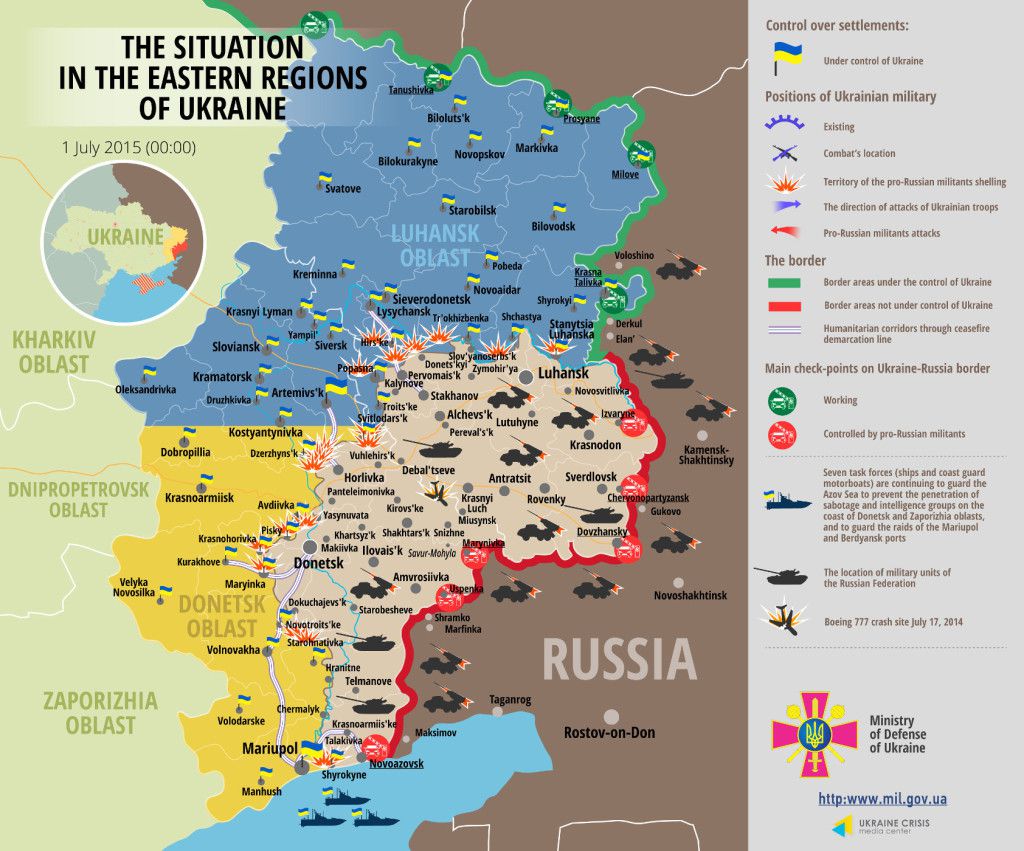 In the Donetsk sector, namely Luhanske and Leninske, a skirmish between Ukrainian troops and militants using tanks and mortars took place. Tensions remain high in Pisky and Maryinka.

Meanwhile, armed provocations against Ukrainian forces continued in Shyrokyne in the Mariupol sector. Every hour we are registering ceasefire violations by militant groups. In addition to small arms and mortars, they use heavy weapons – 122-mm cannons and “Grad-P” rocket launchers.

One Ukrainian soldier was killed in action and ten got wounded in the last 24 hours.

Ukraine’s Security Service detained a Russian citizen—and FSB agent—in Berezove, Donetsk region. The agent confessed that he was recruited by the Russian intelligence in 2008; he was “advising” one of the militant leaders deployed to Debaltseve.

The SBU also detained a female informer of the “DPR” militant group who was passing information on fortifications buildup in Mariupol.

Ukrainian law enforcement together with staff at the State Fiscal Service of Ukraine detained the largest consignment of smuggled goods since the beginning of the Anti-Terrorist Operation. There was an attempt to smuggle 700 tonnes of food in 11 railway cars to the militant-controlled territories. The food consignment was destined for militants but thanks to professional actions of law enforcement, ATO forces stopped it.